CANNON PUNCH TOWARDS SKY AND CROUCHING TIGER ON GROUND Two patterns from the Pakua Set, namely “Cannon Punch Towards Sky” and “Fierce Tiger Crouching on Ground”, are discussed. A combination of the skyward cannon punch with some fist techniques can make you into a formidable fighter — even with gloves on. This can be a good answer to those who say that kungfu is quite useless when gloves are worn.

Many people, especially those who only perform kungfu forms, would be at a loss as what combat functions “Fierce Tiger Crouching on Ground” can have. Amongst many other applications, it can be used to break an opponent's arm or leg. You should know not only the combat applications of any patterns but also their counters. Here is how to apply “Two Steps Pull Boat” in continuous attacks. Sometimes the pattern is modified to suit the combat situation. For example, it may be used like “Single Tiger Emerges from Cave”. The Techniques of Bao and Chow 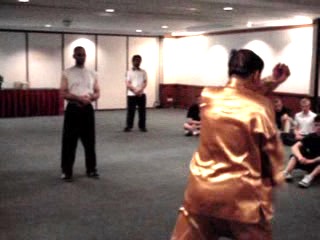 You may confuse your opponent by throwing different types of fists, such as skyward, horn, straight and whip as demonstrated here. This variety of fists is a good counter against many kungfu practitioners who say that their kungfu combat efficiency is made ineffectual by wearing gloves. The fact is that these practitioners would be ineffectual regardless of whether they wear gloves. 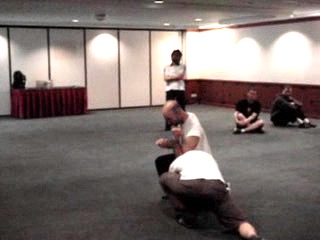 Here is an excellent application of the pattern “Fierce Tiger Crouching on Ground” against a wrestler attempting to grip your leg for a take-down. This pattern locks the attacker's hands, while executing an elbow strike at his head or back that can cause serious injury.

“Fierce Tiger Crouching on Ground” is also an excellent counter against a floor-sweeping attack. Be careful when you practice it on a sparring partner. It can easily break the attacker's leg. How would you counter if an opponent applies “Fierce Tiger Crouching on Ground” on your floor-sweeping leg? Sifu Roland suggests a good counter using “Monkey Testing Cave”. If your leg is being pressed down before you can turn it, you can turn your body the other way and counter with “Carp Turns Body”. 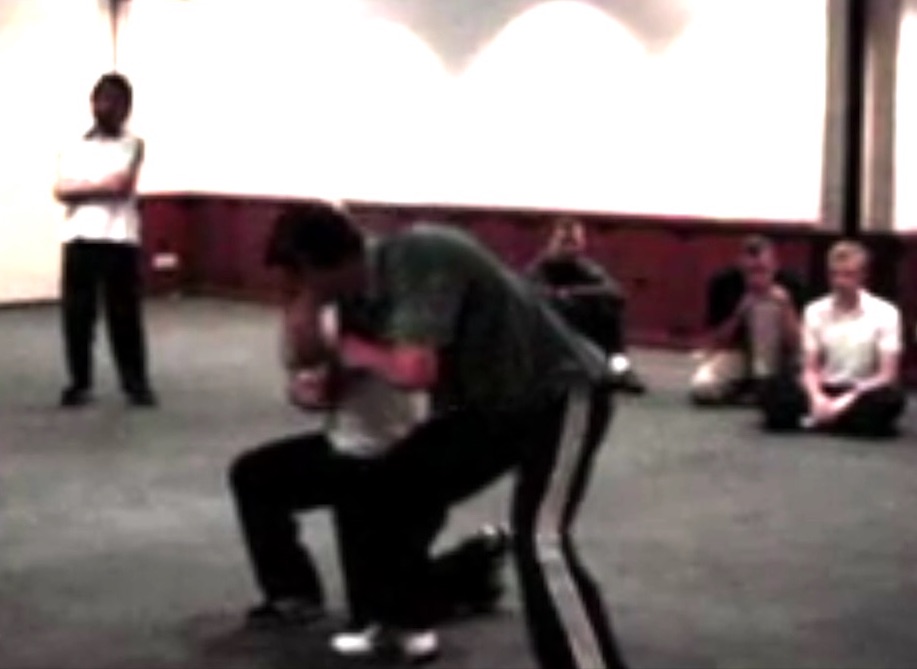 Here is another application of “Fierce Tiger Crouching on Ground” to break an opponent's arm. It is interesting to note so many combat applications of this pattern which many uninitiated practitioners may believe is only flowery.

Counter for Every Attack 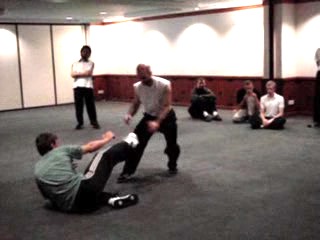 In Shaolin Kungfu there is at least one counter for every attack. In line with the aim of this course, which is to enable participants to think and act as masters, Grandmaster Wong asks Steve to release himself from this seemingly impossible situation. Steve counters effectively using the pattern “Spiritual Monkey Kicks Leaves”.

Cannon Punch Towards Sky and Fierce Tiger Crouching on Ground from Wong Kiew Kit on Vimeo.