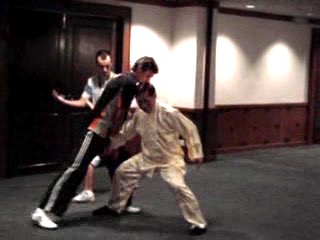 Using this secret tactic of “leak hand” you can often strike an opponent without him knowing where the strike comes from as well as making it impossible for him to counter-strike.

“Leak Hand”, or “Lou Sau” (“Lou Sou” in Mandarin pronunciation) in Chinese, is one of the many important concepts in Shaolin or Hoong Ka Kungfu that is sometimes mentioned but little understood. It is found in many of the kungfu sets in Uncle Righteousness lineage. However, its application was taught only to selected disciples.

There are different ways and different patterns of implementing the tactic of “Leak Hand”. The pattern used here is called “Leak Hand Cannon Punch”, which is composed of two patterns, “Leak Hand Tiger-Tail” and “Cannon Punch Towards the Sky”. Like many things in Shaolin Kungfu, its form is simple but its application profound.

A Legacy from Uncle Righteousness Lineage 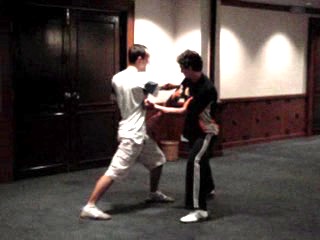 This composite pattern is called “Leak Hand Cannon Punch” or “Lau Sau Thong Thien Pao” in Chinese (Cantonese), and is a legacy from Uncle Righteousness lineage. It is composed of two patterns, namely “Leak Hand Tiger Tail” and “Cannon Punch Towards the Sky”. 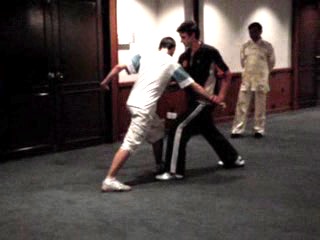 The Secret is Revealed 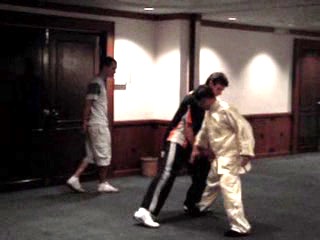 When an opponent responds to your initiate attack, which may be a feint one, and irrespective of whether he brushes it away, grips your attacking arm, dodge to avoid your attack, or almost in any other ways, you move in to strike his groin, often without him realizing it, as well as strike his head. Your footwork must be good, following him closely yet difficult for him to counter-attack you.

The Opponent Catching your Arm

The opponent may catch your arm, but you still use your "leak hand." Footwork adjustment is needed, and the feet, body and hands must be in harmony. When applied skillfully, an ordinary opponent has little or no chance to escape.

Use the Other Hand to Drink Coffee 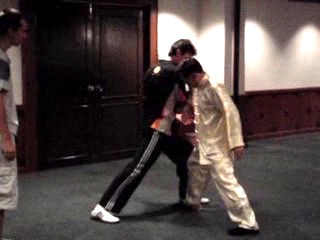 Grandmaster Wong demonstrates that you can strike him but he cannot strike you. There is s difference between entering when he is holding your arm and when he just blocks your initial attack. You can use the other hand to drink coffee.

Your Opponent Cannot Strike You 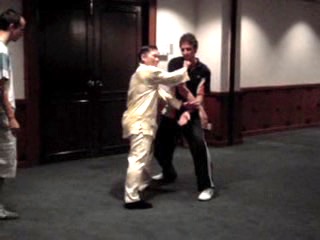 Notice that when you enter into him correctly, your right hand strikes him but at the same time your right arm prevents him from striking you. When you release him with a circular mlovement of your hand, make sure that your opponent cannot strike you. 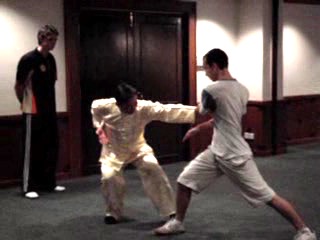 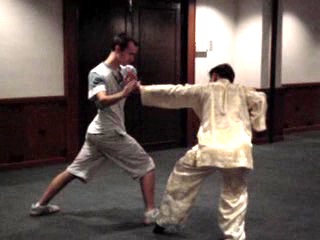 Grandmaster Wong repeats the subtle movement from another angle so that the course participants can observe more clearly. Take note that even when your both hands are under control, you can reverse the situation without having to use brutal strength. You reverse the position by good footwork.

Revealing the Secret Tactic of Leak Hand from Wong Kiew Kit on Vimeo.