EFFECTIVE TECHNIQUES FOR FIGHTING ON THE GROUND 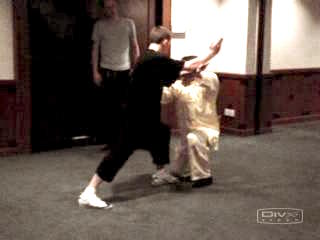 No matter how an opponent may strike or kick at you while you are on the ground, you can effective counter his attacks using “Old Dragon Squats on Ground”

The Dragon stylist is not only graceful and flowing but also agile. The pattern “Move Body Little Jump” is effective for training agility. This pattern is useful when you wish to jump away swiftly from a combat situation.

A good way to land when jumping away is to use the pattern “Submerged Dragon Subdues Sea Monster”. There are many combat functions, one of which is avoid an opponent's attack on top and strike his leg below. You may then rise to attack with “Comet Chases away Moon”.

If you wish to remain on the ground for some reasons, “Old Dragon Squats on Ground” enables you to be safe from any attacks. An opponent may strike or kick you in any ways and you can counter effectively using this pattern. 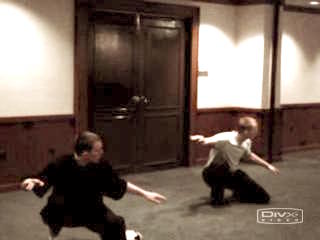 There are two patterns here. First is the pattern for the jump, called “Move Body Little Jump”. The second pattern is when the jump is completed, called “Submerged Dragon Subdues Sea Monster”. What combat functions can you think of for these two patterns?

Jumping away Agilely from any Attacks. 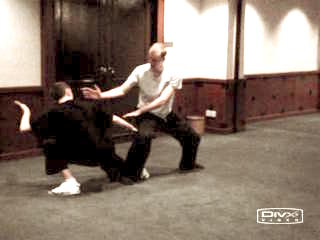 An obvious application is to jump away agilely from any attacks. In the video clip, Adam moves in to attack Peter. Peter responds with “Fell Tree with Roots” to fell Adam. Adam jumps away lightly and strikes Peter's front leg with a hand sweep. 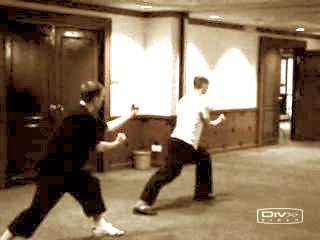 Following “Submerged Dragon Subdues Sea Monster” is the pattern “Comet Chases away Moon”. If an opponent moves in to attack you while you are squatting on the ground, move up and strike him with “Comet Chases after Moon”. 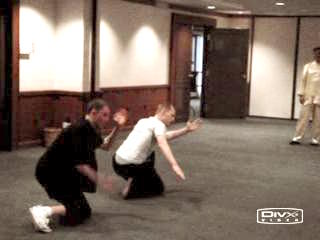 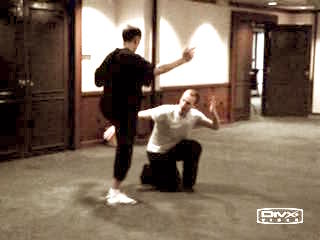 Peter uses “Old Dragon Squats on Ground” to counter Adam's kicks. The hand sweep is not meant to block the kicks, but to chop at the legs. When the opponent hesitate, drive a reverse leopard punch into his groin using the pattern “Black Panther Rushes at Food”. 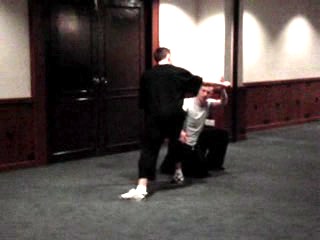 “Old Dragon Squats on Ground” is not just for countering kicks. It is also effective for countering hand strikes. Grandmaster Wong advices Peter not just to block the hand attacks, but to deflect them and simultaneously strike the opponent's leg with the other hand.

Skill is Crucial to Apply Techniques 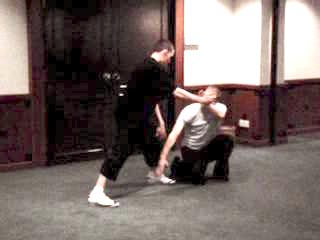 Grandmaster Wong says that this pattern “Old Dragon Squats on Ground” is an excellent ground pattern as it can be used to defend against or counter any strikes. Peter tries to put this pattern into operation. Although the technique is correct, the skill in using it is not yet accomplished. Can you tell what is wrong? 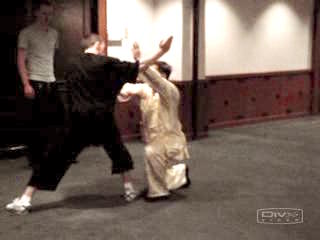 Grandmaster Wong explains that this is an excellent pattern to use when you are on the ground. With this pattern, your opponent cannot harm you. He asks Adam to attack him in whatever ways he likes. Grandmaster Wong successfully deflects or counters all the attacks.

Effective Techniques for Fighting on Ground from Wong Kiew Kit on Vimeo.