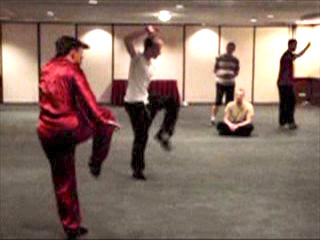 Manifesting the Majesty of the Monkey God, the Great Sage Equal to Heaven

This set is extremely effective for combat as well as for developing qualities like agility, fluid movement and mental freshness that are very useful for daily purposes.

Starting the Set by Rolling Out 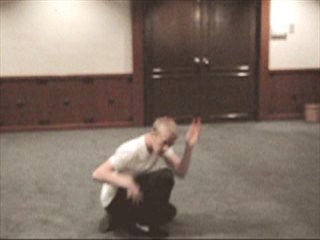 Unlike all other sets, the Monkey Set starts by rolling out, not by giving the salutation pattern. Why is this so? My answer, and it is a good one, is that was the way my sifu, Sifu Ho Fatt Nam, did. However, I didn't ask him why. You can have some intelligent guesses. So long as the answer is justifiable, it can be accepted. There are a few formidable kicks even in these few patterns. 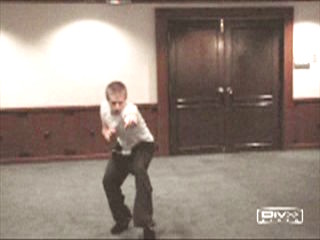 Manifesting the Spirit of the Set 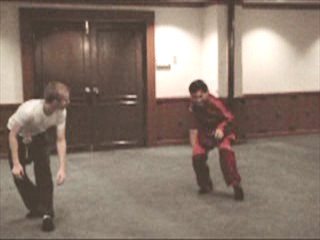 Grandmaster Wong shows Nick how to express the spirit of the Monkey. Manifesting the spirit, not just performing the forms, is very important. The spirit of being playful as well as agile is discernable here.

Laughter is Common in Shaolin Wahnam 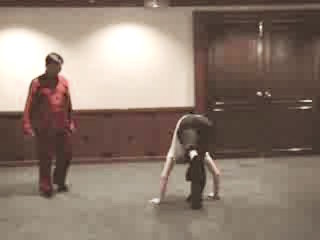 Laughter is a common feature in our Shaolin Wahnam training. Notice the fluidity of Nick's movements. They are also powerful, being charged with flowing internal force.

Kicks are a Forte of the Monkey 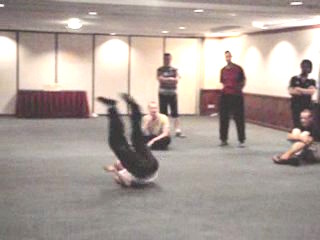 Kicks are a forte of the Monkey, and they are very tricky. Obviously Monkey kicks are very different from Taekwondo kicks or Bruce Lee's kicks.

Ape Patterns for the Big and Strong 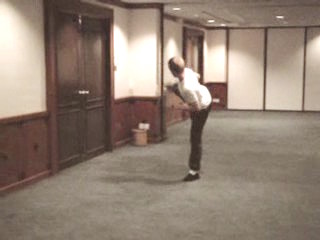 The Monkey Set is normally for small-sized persons, but, in line with yin-yang harmony, there is also something for the big and strong, as in the Ape patterns shown here. Making relevant sounds is part of the pattern requirement.

From Cheekiness to Majesty

The Monkey Set starts with cheekiness and completes with majesty, symbolizing the spiritual path of the Monkey God, the Great Sage Equal to Heaven, who provides the inspiration for this set and who has great significance in Grandmaster Ho Fatt Nam's lineage.