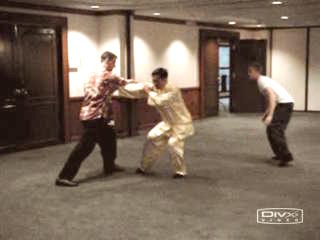 A Monkey stylist is usually small in size, and his movements are generally “soft”. How would he overcome a bigger size opponent who is powerful?

Monkey techniques are graceful and employ the tactic of using minimum force against maximum strength. The pattern “Spiritual Monkey Brushes Leaves” is an excellent example. An opponent's attacks may be ferocious and powerful, but a skillful application of this pattern can subdue them.

Moreover, a Monkey stylist uses internal force, where size and muscular strength are not important. Indeed, being muscle-bound would be a disadvantage. 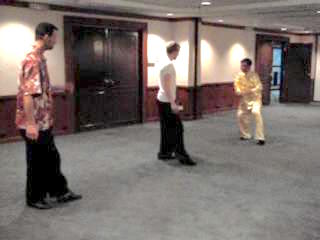 Instead of using “Single Tiger Emerges from Cave” to defend against an opponent's punches, a Monkey stylist may use “Spiritual Monkey Brushes Leaves”. But how could you use such a “soft” response against powerful attacks? 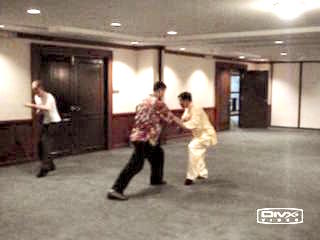 Here are the secrets of “soft” defence, where a skillful exponent can use minimum force against maximum strength, and without moving away. In fact you can prevent a powerful opponent from moving in, striking him, for example, with “Spiritual Monkey Emerges from Cave”. 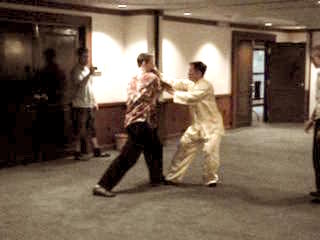 As a Monkey stylist is usually small-sized and his forms soft, a powerful opponent using Tiger-Claws will be very formidable. How would he overcome such formidable, powerful attacks. Here is an example, revealing again the tactic of “soft” against “hard”.

How does a Small Monkey Overcome a Powerful Tiger? This looks like a galore of secret revelation! Grandmaster Wong asks Charles to use powerful Tiger Claws to apply chin-na on his arm. How would a soft, small-sized Monkey overcome such attacks? View the video to find out.

Internal Force instead of Muscular Strength Grandmaster Wong asks Nick to release himself from Charles powerful grip. Nick uses muscular strength in his first attempt, which is unsuccessful. But using internal force in his second attempt, he successfully counters Charles' Tiger-Claw grip. Here is an interesting pattern called “Light-Footed Monkey”. Besides being agile, the toes of the Monkey stylist can be used to attack an opponent.