TIGER PATTERNS FOR CHIN-NA AGAINST KICKS AND COUNTERING THE SHOOT 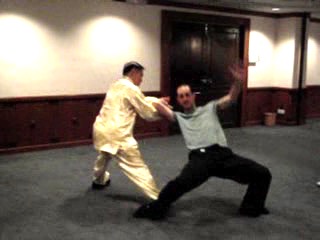 Chin-na, or gripping an opponent in such a way to disable him from fighting for some time, is an advanced art in Shaolin Kungfu. It is a compassionate way of combat. It puts an opponent out of action without serious injuring him, and allows him to recover if he seeks remedy from a master or Chinese physician.

When an opponent attacks you with a “shoot”, you can stop him with “Yun Tan Tames Tiger”. You can choose merely to fell him onto the ground, or cause serious internal injury on his head. 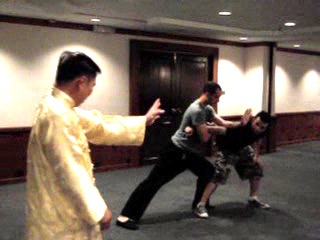 Grandmaster Wong demonstrates the Shaolin chin-na secret. It is also known by another name as “Cross-Road Lock Hand”. This pattern makes effective use of leverage. Be very careful when you practice with your sparring partner that you do not break his arm or dislocate his elbow.

Can be used Against Any Kicks 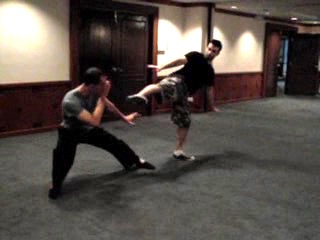 The full name of the pattern is “Tame a Tiger with a String of Beads”. Amongst other combat functions, it is an excellent technique that can be used against any kicks. It is important that you leave your front hand away from the direction of the kick. The hand is meant to protect your front leg, especially the knee.

Difference between the Left and the Right Mode 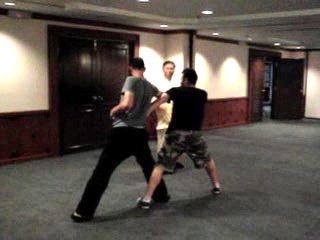 “Taming Tiger with Beads” can also be used as a chin-na technique, as demonstrated here by Sifu Eugene. Grandmaster Wong asks Sifu Eugene to use the left instead of the right mode, which not only gives the attack better coverage from counter-attack, but makes it difficult for the opponent to escape. Have you noticed that here Sifu Eugene is attacking Sifu Innes on three points — the wrist, the elbow and the ribs?

Chin-Na Technique of God of Wealth 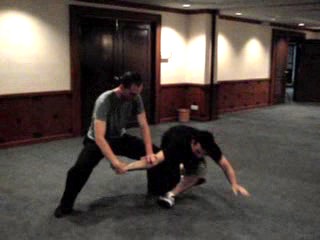 Sifu Innes demonstrates an application of the pattern “Yun Dan Tames Tiger”, which shows another chin-na technique. Yun Tan is a martial god of wealth. He has a black face and rides a tiger. Sifu Eugene's stance is solid, yet Sifu Innes could fell him onto the ground. Some of you may have heard of Grandmaster Wong's story regarding this pattern with his siheng.

Stopping a Shoot with Taming Hand 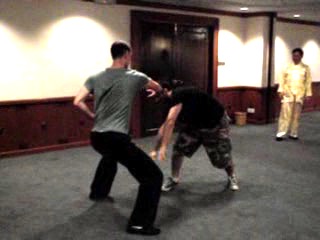 Another application of “Yun Tan Tames Tiger” is to stop a “shoot”. This is a merciful counter, merely stopping his attack and pushing the attacker onto the ground. A drastic counter is to strike the attacker head with the palm, which may kill him or cause serious injury. Grandmaster Wong suggests that the exponent may turn to a side-way Horse-Riding Stance instead of using a frontal one.

Tiger Patterns for Chin-Na, against Kicks and Countering the Shoot from Wong Kiew Kit on Vimeo.