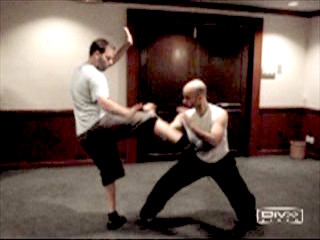 Some people may wonder how training in combat sequences can lead to proficiency in free sparring and real fighting when these occur without any fixed sequence. They are not aware of the gradual and systematic release of control from pre-arranged to free sparring in our combat sequence training. They also fail to understand that a primary aim in combat sequences is to train correct and spontaneous attacks and responses in a cost-effective manner.

Kicks Must Arrive at Target 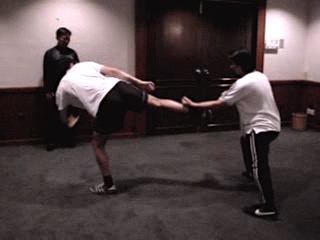 The course participants progress to the next stage, i.e. Combat Sequences 9 to 12, where kicks are used. Alex of England and Dr Damian of Malaysia review Combat Sequence 9, which involves a side-kick. Here, Alex's kick is too far from target. 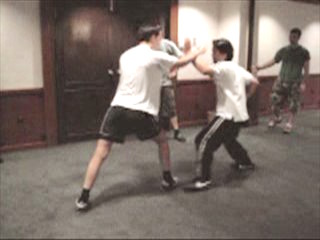 According to the routine, which is Combat Sequence 9, Alex is to kick with his right leg. But if he does so in this situation, his kick will not reach. Hence he makes an adjustment and kicks with his left leg. With practice, adjustments can be made instantaneously.

Move Back for Safety First 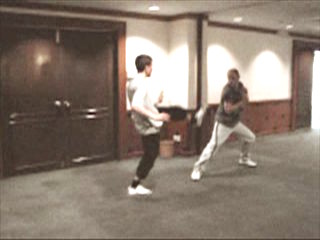 Adam and Andy are practicing Combat Sequence 10, which employs continuous cannons and a thrust kick in pressing attacks. But at the completion of the planned sequence, Adam is too close to Andy's defending hand.

Adjusting the Sequence for the Occasion 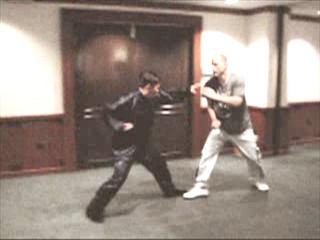 There is a inter-relationship between Sequence 9 and Sequence 10. If your opponent counter-attacks after you have pressed in with two continuous cannons, lean back to execute a side-kick, which is likely to hit him as his attack has just spent. But if he hesitates, you move in swiftly with a thrust kick.

The Purpose of Routine Training 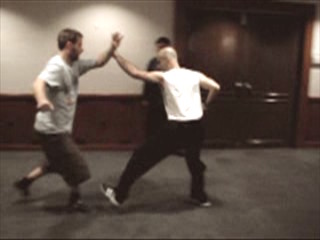 Sifu Rolland Mastel and Sifu Anthony Korahais review Combat Sequence 11. But real fights do not run in a planned routine, you may say. True, but routine training is to enable you to execute a series of attacks and responses correctly and spontaneously. Then you learn to make appropriate changes when opponents fight out of routine.

Training to Respond Correctly and Spontaneously

Here Sifu Rolland and Sifu Anthony review Combat Sequence 12. Routine training enables you to practice particular attacks and responses many times systematically. Hence, in a real fight if an opponent uses a similar attack, you can respond spontaneously and correctly. 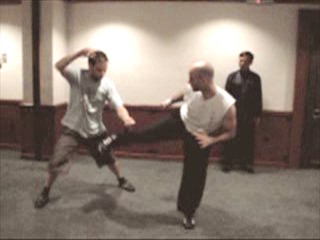 Modifications on the Spot to Suit Conditions 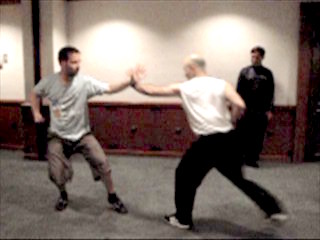 Here Sifu Anthony initiates with Combat Sequence 10. But he rightly skips the thrust kick, which is in the planned routine, because his opponent has moved too far back where the kick would be redundant. This is an example of making medications on the spot to suit existing combat conditions.