For many people, kicks are quite formidable. They are at a loss as what to do when opponents kick them. This video series shows a variety of counters against kicks, some of which are quite deadly. If you have practiced these counters well, as soon an opponent executes a kick, you can readily defeat him.

There are also deadly techniques to grip an opponent's head, especially if he attempts to take you down with a shoot. You would also learn how to counter if an opponent grips your head or throw knee jabs at you.

Spiritual Dragon Rises to the Sky Dr Damian asks about the pattern “Spiritual Dragon Rises to Sky” from the Five-Animal Set. Grandmaster Wong says that he will retell a story about Grandmaster Ho concerning this pattern. Many members of our Shaolin Wahnam Family would have heard about this story of Grandmaster Ho using this pattern to throw a three-time international Muay Thai champion out of the door when he came for a challenge. Grandmaster Wong contrasts this pattern “Spiritual Dragon Rises to Sky” with another pattern “Dark Dragon Draws Water”. If we use this “Rising Dragon” pattern against an opponent throwing a punch, we must be careful of his Horse-Back-Kick. We may also use this “Spiritual Dragon Rises to Sky” against a kick, in which case the risk of an opponent countering with a Horse-Back-Kick is minimal. But Grandmaster Wong suggests that we could use “Bail Moon from Sea Bottom” instead.

Many Counters against Side Kicks

There are many effective counters against the side-kick. At random Grandmaster Wong demonstrates four counters, “Lohan Strikes Drum”, “Bail Moon from Sea Bottom”, “Little Bird Shows Toes” and “Golden Leopard Speeds through Jungle”. Then, in what combat situation is “Spiritual Dragon Rises to Sky” most suitable? 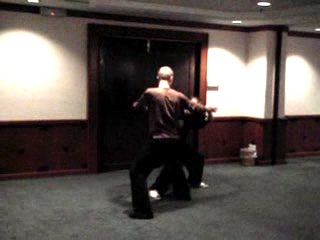 "Golden Leopard Speeds through Jungle" is used in this video, but in the Horse-Riding Stance. It will be better to have the left leg in front hitting the opponent from the out-gate rather than the right leg. What are the combat functions of the pattern “Dragon Manifests Marvelous Majesty”? Dr Damian suggests that it is used to dislocate an opponent's head. Grandmaster Wong says that pattern would be “Double Dragons Play with Pearl”. “Double Dragon Plays with Pearl” is a deadly counter against an opponent attempting a “shoot”. First stop him with the pattern “Dark Phoenix Exhibits Tail”. Then dislocate his head with Double Dragons.

Taming Tiger with Beads is a Better Choice 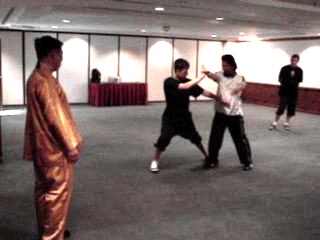 A student suggests that the pattern “Dragon Manifests Marvelous Majesty” can be used to counter an opponent gripping your neck or your arm. Grandmaster Wong points out some weaknesses of this counter. In such situations, “Taming Tiger with String of Beads” would be a better choice.

Felling an Opponent with Slanting Arm Sifu Anthony suggests using this “Dragon Manifests Marvelous Majesty” to fell an opponent. As he attacks with a punch, grip his attacking hand, pull it backward and fell him with slanting arm.

Felling an Opponent when he Kicks 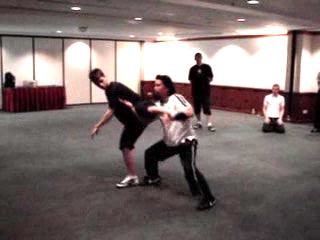 Dr Damian suggests that you can also fell an opponent with this “Dragon Manifests Marvelous Majesty” pattern when he executes a side kick. Brush aside his kicking leg, and fell him with a slanting arm. There are, however, other situations when applying this pattern is excellent.