Manifesting the majestic force of the Dragon

But, of course, there are also effective counters. Basically it comes down to the skills of the combatants rather than their techniques or tactics that usually decide the outcome of combat.

Every Kungfu Pattern is Combat Functional 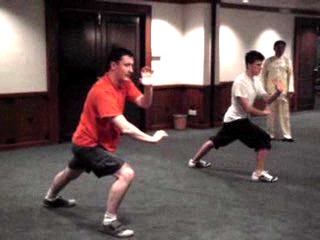 Chris and Nick continues with the other patterns of their specialized set, “Shaolin Five Animals”. The patterns are “Single Tiger Emerges from Cave”, “Black Tiger Steals Heart”, “Hungry Tiger Catches Goat” and “Angry Leopard Charges at Rock”. Many people think that these patterns are only decorative without any combat functions. They are, of course, mistaken. Every kungfu pattern is combat functional. Grandmaster Wong reveals yet another Shaolin secret known as “Grindstone Leopard Punch”. Almost irrespective of how an opponent responds, a skillful exponent can use “grindstone leopard punches” to attack him. 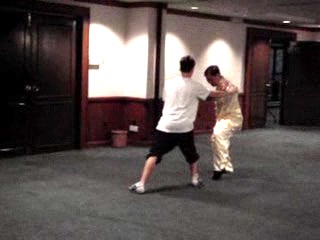 Grandmaster Wong also reveals an effective defence against “Grindstone Leopard Punch”. It is our familiar “Single Tiger Emerges from Cave”. But a skillful exponent of grindstone leopard punches can also penetrate through the Single Tiger defence. The next pattern is “Satisfied Reincarnation Crane”. Many students who have performed this pattern for many years, may not know how to use the Crane Beak. They mistakenly think it is meant for pecking. It is not. But do you know how it should be used? Nick demonstrates an application of “Satisfied Reincarnation Crane”. It effectively employs the principle of “minimum force against maximum strength”. Good footwork and body-movement are essential.

The next two patterns are “Crane Stands Amongst Cockerel” and “Dragon's Chi Spread Across Stream”. The Dragon pattern is excellent for manifesting internal force. But it also has useful applications. Grandmaster Wong asks the participants to suggest some of the applications.

Variety of Techniques in Shaolin Five Animals from Wong Kiew Kit on Vimeo.