PATTERN ANALYSIS OF THE PAKUA SET 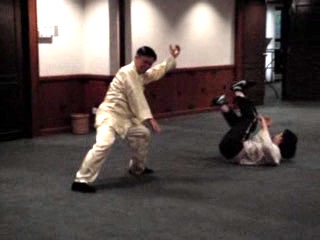 The Pakua Set looks simple but is very sophisticated in combat applications. It is the set that enables Grandmaster Wong to be “enlightened” in using any kungfu patterns for combat.

The starting pattern “Two Steps Pull Boat”, for example, is simple looking but can be subtle in many combat functions. You can use a series of typical Pakua patterns to attack an opponent almost irrespective of how he responds. 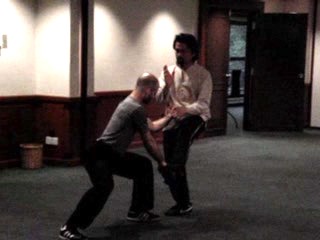 Sifu Anthony demonstrates the pattern “Double Steps Pull Boat”. Then he shows a combat situation where it can be used. There is, however, a weakness in this application. Do you know what it is, and how you could overcome the weakness using the same pattern? 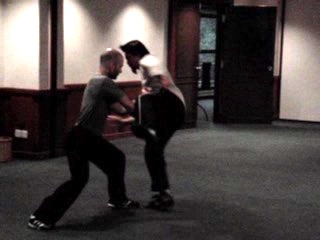 A weakness in using “Two Steps Pull Boat” to counter an opponent's whirlwind kick is that his front hand may be too near to be comfortable. One way to overcome this weakness is to improve the spacing and deflecting the opponent's leg to off-set his balance in such a way that it is difficult for him to strike with his hands.

But if the opponent is too close or if he attacks with a knee strike instead of a whirlwind kick, then the adjustment shown in the previous video may not be sufficient. The problem, however, can be overcome by changing step.

Throwing Opponent onto the Ground 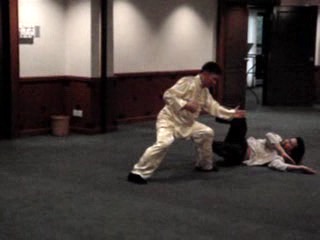 Instead of striking an opponent's groin, a more merciful response is to modify the pattern “Two Steps Pull Boat” to throw the opponent onto the ground. Notice that the application follows the attacker's momentum 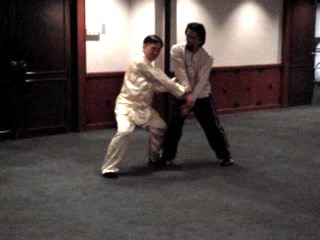 Another useful application is to release an opponent's double hand grip on your arm and simultaneously strike his ribs. Remember to guard the opponent's hands as you strike him.

Simple Looking but Subtle in Application 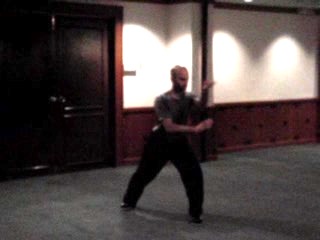 Sifu Anthony proceeds to the next two patterns, “Bow Arrow Thread Palm” and “Phoenix Flaps Wings”. These patterns look simple but are very subtle in combat, allowing for many and varied applications. Can you tell some of their combat functions? 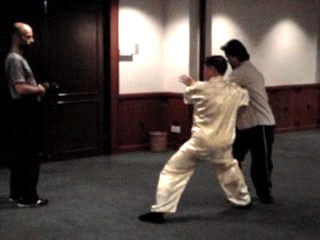 Grandmaster Wong shows a series of subtle combat applications of “Bow Arrow Thread Palm” and “Phoenix Flaps Wings”. If the opponents grips your hand, you can follow up with “Two Steps Pull Boat”. The attacks flow from the opponent's defence without break.

Series of Attacks Irrespective of Responses 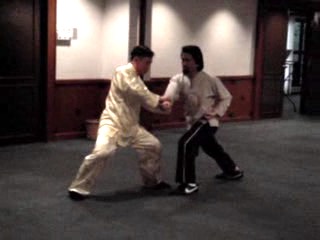 Grandmaster Wong uses the series of patterns from the Pakua Set to attack Dr Damian. The patterns are “Bow-Arrow Thread Palm”. “Phoenix Flaps Wings” and “Pakua Palm Technique” or “Two Steps Pull Boat”. Almost irrespective of what the opponent may respond, a skillful exponent can just use this series of attacks on his opponent!