FLOWING WITH THE OPPONENT'S MOMENTUM 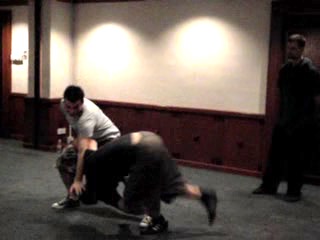 Using the principle of flowing with the opponent's momentum, you can release a strong grip on your throat without tearing away your trachea

If an opponent has succeeded in gripping your throat, how would you release it? Don't push away his hand or pull away your head, because these movements may cause his grip to tear away your trachea. You should also guard his gripping hand to prevent him from suddenly releasing the grip to attack your eyes.

This video series shows some participants attempting to release a grip on their throat. Although the techniques applied may be different, the basic combat principle is the same, i.e. flowing with the opponent's momentum. This important kungfu principle enables small sized persons to defeat bigger sized opponents 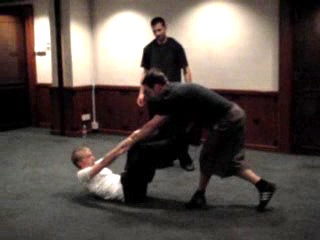 Nick demonstrates an interesting pattern called “Naughty Monkey Plays with Leaves”, which often catches an opponent by surprise. This pattern is excellent if the grip has been released. If the grip is still on, the pattern is ineffective. First, you need to release the grip on the throat.

The Grip must First be Released 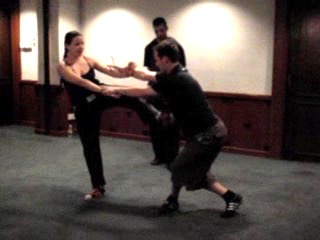 Rolling according to Opponent's Momentum 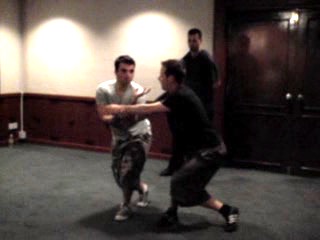 Sifu Eugene jerks his elbow down at the gripping arm to dislodge it from the throat. If the grip is strong and hard, this counter may hurt your own throat. You should also hold the opponent's gripping hand so that he may not release the grip to strike your face. This counter is called “Double Dragons Tame Serpent”. You can then break his wrist or his arm, or counter-attack his throat.

Subtle Counter-Attack which may Not be Noticed 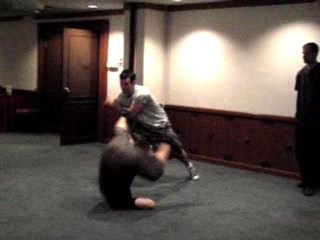 Sifu Roland executes a subtle counter-attack, which the uninitiated may not notice but is obvious to the initiated. This is one of the Monkey's tricks. 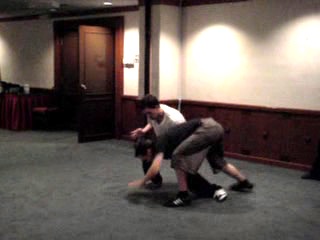 Not only Adam can readily release the grip on his throat but also control Sifu Roland on the ground. It is illuminating to note that all the techniques are spontaneous. At first Adam is unsure of what to do. Then he applies the principle again and fells Sifu Roland onto the ground. Notice also that no muscular tension is used; all the movements are accomplished in smooth chi flow. 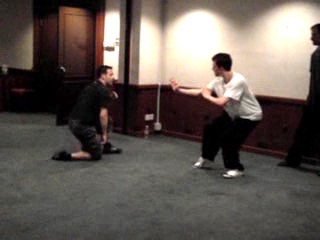 Earlier (as shown in the previous video clip) Sifu Roland was felled onto the ground. Now he uses the same principle of flowing with the opponent's momentum and roll safely away. The same principle can be applied with different techniques and at different skill levels. Adam is smart. He quickly assumes his poise, aware of possible Monkey's tricks.

Full of Fun and Laughter 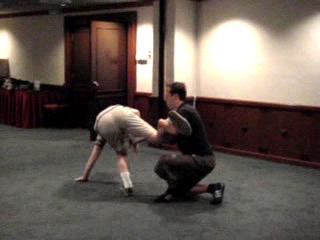 As always, Shaolin Wahnam lessons are full of fun and laughter. Chris turns his head around to escape the grip on his throat, and aptly executes a Tiger-Tail kick. If the grip is firm, he may not turn around. The Monkey is smart. He grips the Tiger-Tail and goes for the tiger's balls. 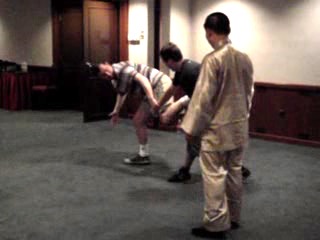 Christ, therefore, releases the grip first. He must hold on to the grip with one hand to prevent the opponent from tearing the throat. By turning his head and body, Chris is able to release the grip, and executes a Tiger-Tail Kick.

Flowing with the Opponent's Momentum from Wong Kiew Kit on Vimeo.