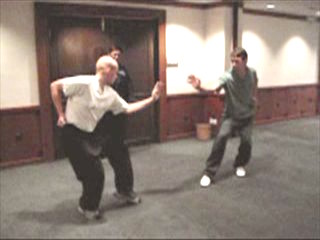 Sifu Dan and Sifu Steve sparring with good form, force, flow and an element of threat

An important aim of this Special Shaolin Kungfu Course is to enable participants use techniques from their specialized sets in free sparring and real fighting. An excellent way to accomplish this is to progress from the sixteen Basic Combat Sequences.

This video series reviews the lessons on applying the first four sequences to consolidate picture-perfect form, internal force, fluidity of movements and an element of threat in combat.

Daniel of Shaolin Wahnam USA and Steve of Shaolin Wahnam Australia go over Combat Sequence 1. The emphasis here is on picture-perfect form. When the form is perfect, it gives the best technical advantages of the combat situation the patterns are meant for,

Applying Internal Force to the Forms 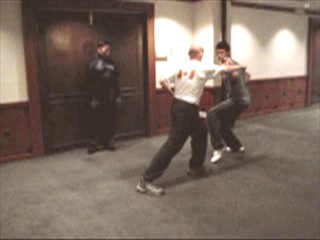 Having attained picture-perfect form, the next step is to apply force. The force we use in our Shaolin Kungfu is internal force, not mechanical strength. Grandmaster Wong reminds the participants that if their sparring partners fail to respond successfully to their attack, they should withhold their force so as not to hurt their partners.

In One Continuous, Smooth Flow 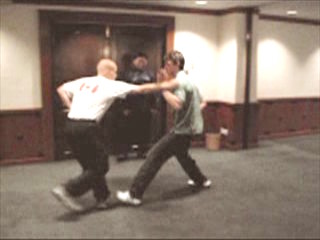 The Element of Threat 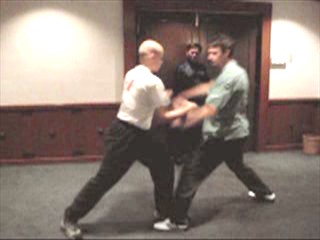 When the forms can be performed correctly, forcefully and smoothly, there should be an element of threat. The opponent must feel threatened. This does not necessarily mean you have to be brutal or in rage, but the opponent is keenly aware that if he fails to stop your attack he can be badly hurt. Yet, we may choose not to hurt, but the element of threat must be there. 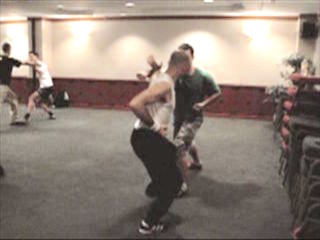 The class practices what has just explained. In the foreground are Sifu Anthony Korahais and Sifu Eugene Siterman, both from Shaolin Wahnam USA. Though they are not brutal, their force is visible, and an opponent would know that he would be badly hurt if struck by them. 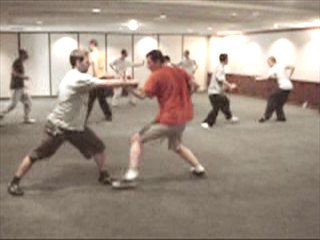 In the foreground are Sifu Roland Mastel of Shaolin Wahnam Switzerland and Chris Holmes of Shaolin Wahnam England. All the participants are using Combat Sequence 1, which has only one attack pattern and one defend pattern. The patterns are purposely reduced to the minimum so that the practitioners can focus on skills. 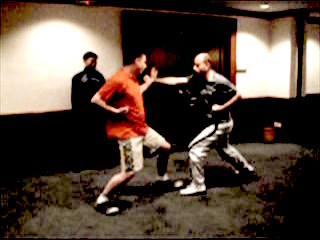 Chris and Andy, both from Shaolin Wahnam England, go over Combat Sequence 2, where a new attack pattern and a new defence pattern are added to Combat Sequence 1. Their forms are correct, forceful and flowing, and there is an element of threat. 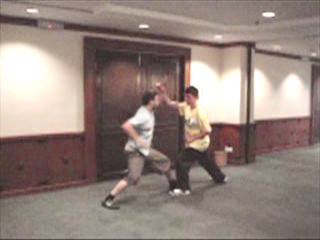 Sifu Roland from Switzerland and Adam from USA go over Combat Sequence 3. There should be “Progress without Retrogress”, i.e. in attempting to be fast, we must not be “floating”, which would detract from form and force. We can be fast, and still have good form, are forceful and exhibit an element of threat. 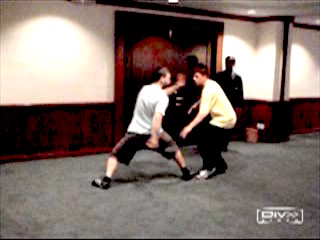 The performance in this video clip, which comes immediately after the one shown in the previous video clip, shows marked improvement in form, force, flow and threat. Putting good advice into action is one of many ways why we can achieve good result in a short time.

Form, Force, Flow and Element of Threat in Shaolin Kungfu from Wong Kiew Kit on Vimeo.