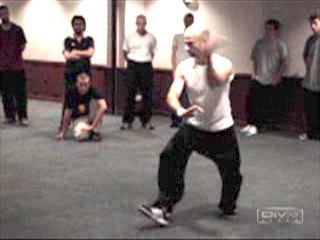 Like a Dragon, the movements of the Pakua Set are fluid and powerful

The Shaolin Pakua Set, which he learned from Grandmaster Ho Fatt Nam, has special significance for Grandmaster Wong. It opened for him the wonders of Shaolin combat application.

It is a Shaolin Kungfu set, and is different from sets in Pakua Kungfu or Baguazhang. There are, nevertheless, similarities, like the use of the palms and flowing, powerful movements like a Dragon's.

This Shaolin Pakua Set is relatively unknown. This is logical, as it is an exclusive set. It was the set Grandmaster Ho Fatt Nam chose when he taught a Sultan or King.

Just practicing the outward form alone does not contribute to combat efficiency or good health, vitality and longevity. The outward form is just a vehicle, a mean, with which the practitioner uses to generate energy flow and internal force, and to apply for combat.

The Importance of Thread-Hand for Combat 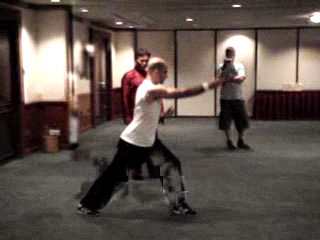 The “chuin sau” or “thread-hand” that Grandmaster Wong shows to Sifu Anthony is very important and useful for combat. You would probably realize that it occurs frequently in our combat sequences. Can you recall some examples?

Yin and Yang in Pakua 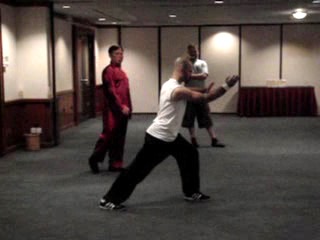 The pattern is called “Z-shape Butterfly Palms”, and it implements a Pakua Palm teachnique. The two palms represent the yin-line and the yang-line in “kua” or “diagram” in the Pakua symbol. 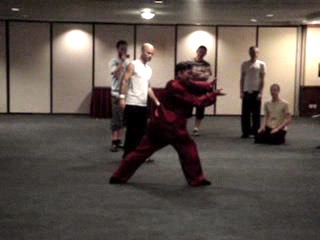 The pattern “Lion Snatches Ball” and the subsequent pattern “Lion Plays with Ball” are deadly techniques. Do you know how they can be applied in combat? Notice the bring back of the ball is not merely with the hands but with the waist movement.

Different Stances for the Same Pattern 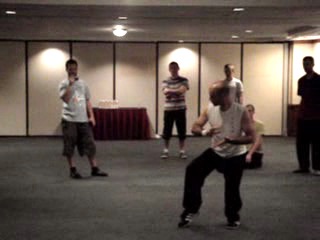 Heavenly Priest and Save Emperor 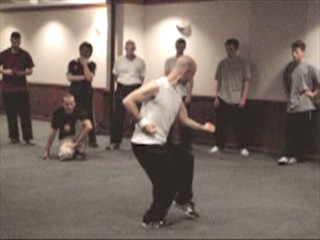 In the “Heavenly Priest” pattern the fist is hung down from top to bottom. It can be used, among many other uses, to strike an opponent's head if he attempts to bend down to grab your legs. In the “Save Emperor” pattern the strike is from top to side. An important leg technique is embedded in one of these patterns. Do you know what it is?

Revealing the Secret of Embracing-Dragon Kick 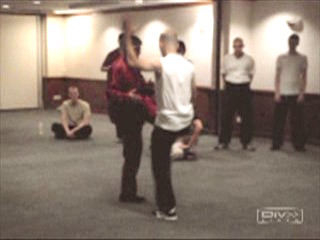 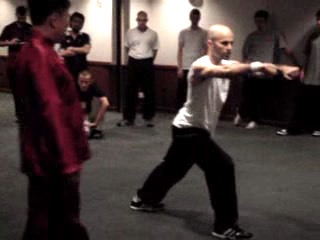 This sequence of patterns holds sentimental memory for Grandmaster Wong. When he was learning from Grandmaster Ho Fatt Nam, during a free sparring session his siheng or senior classmate, Por Kai, used these Double Dragon punches to tempt him to hold. Then his siheng released the grips and strike him with a Fierce Tiger. It was just a gentle tap, but Grandmaster Wong took more than six months to recover.

You may notice that all the patterns here use the palms, and not the fist or other hand forms. Some martial artists think that the palm is not powerful enough, and they insist on using the fist. This indicates shallow understanding. With internal force, the palm is much more powerful as well as more versatile than the fist.

Some Subtle and Deadly Techniques 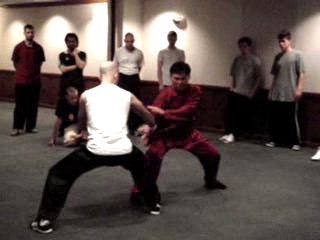 A few subtle techniques are found in these patterns, one of which is demonstrated by Grandmaster Wong. He moves in to grab an opponent's groin. Almost irrespective of how the opponent responds, Grandmaster Wong can still follow through with this technique to grab the groin. A deadly kick is also embedded here. 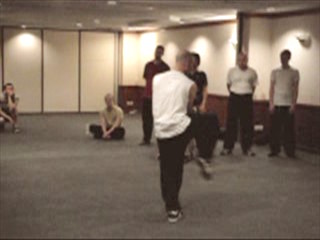 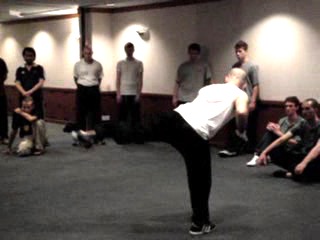 There are many kicking techniques in this Shaolin Pakua Set. In this short sequence alone there are three kicking techniques. Do you know them? They are the organ-seeking kick, the tiger-tail kick and the thrust kick. Kicks are very important in kungfu, though some people mistakenly think there are few or no kungfu kicks. 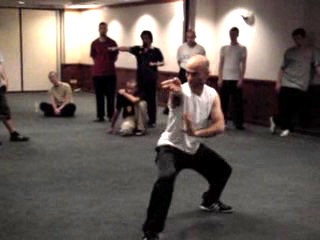 Of the Shaolin “Five Animals” the Dragon is most characteristic of the Pakua Set, The important Dragon pattern, “Swimming Dragon Plays with Water”, which looks simple but is very useful for combat is found here. There are also a sweeping-leg and a reverse sweeping-leg. How would you counter if an opponent with powerful legs sweeps at you. A counter is found amongst the patterns here. 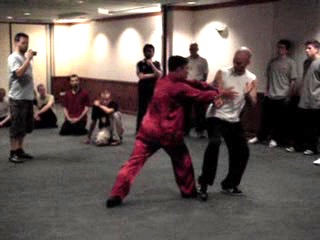 Pakua patterns, like a Dragon, is flowing yet very powerful. Notice the powerful, flowing movements of the pattern “Z-Shape Butterfly Palm”. How do you think the circular hand movement and the unicorn steps of the pattern are used in combat? 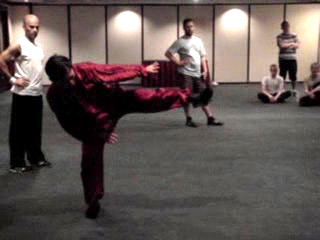 The famous but little understood tiger-tail kick, executed in the pattern “Lazy Tiger Stretches Body”, is performed twice in this short concluding sequence of the Pakua Set. The other leg-technique, “sou thong theui” or “floor-sweep leg” which is also famous but little understood, requires much skill before it can be applied well. After the pattern “Cannon Punch Towards Sky”, are the patterns “One-Finger Stabilizes Middle Plain”, “Dragon and Tiger Appear” and “Two Tigers at Ready” which are not shown here, to conclude the set.