PATTERN ANALYSIS OF THE TIGER-CRANE SET 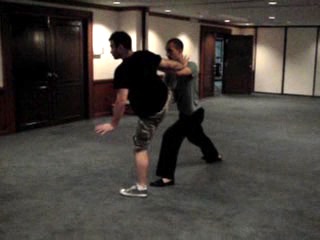 At the beginning the movements of fighters were straight-forward, not unlike the random punching and kicking of untrained persons. But as experienced fighters used more advanced movements, simple techniques gradually became more sophisticated. These fighting movements were stylized into kungfu patterns over many centuries. Hence, when we practice a kungfu set, we are actually going over the effective fighting movements used by past masters.

Due to various factors, different combatants preferred some patterns over others. The various special sets in this course represent the crystallization of these various preferred ways of fighting. Course participants go over all the patterns in their set to explain their combat applications. 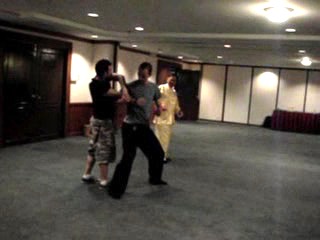 This pattern is called “Tame Tiger Hide Dragon”, and is found at the beginning of the Tiger-Crane Set. Many practitioners of the set have performed this pattern without knowing its combat application. One useful application shown by Sifu Innes and Sifu Eugene here is to counter a grip from behind. This pattern is also used as a "taming" hand. 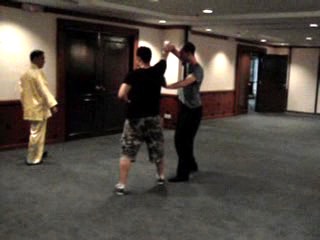 Again, many practitioners are ignorant of the combat application of this pattern called “Four Fingers Piercing Sky”. Sifu Innes shows an application. It can be used like “Single Tiger Emerges from Cave”. 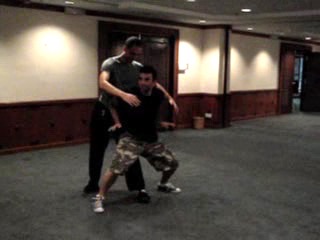 A useful application of this pattern, “Flying Bird Flaps Wings” is to release a double arm grip from behind, especially when an opponent has not tightened his grip. If an opponent uses a Bow-Arrow Stance, you would have to land sideway so that you can stomp on his toes and without his bent front knee hurting your back. 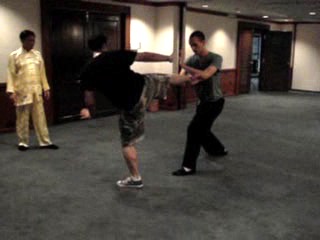 Why do you think the two Tiger-Claws are placed in the way of the pattern? Sifu Innes suggests that the Tiger-Claws are meant to grip an opponent's leg as he kicks. It can be used in this way, but it is not a good response because there are some weaknesses.

Improving the Combat Effectiveness of the Pattern

Sifu Innes improved the combat effectiveness of the pattern. Now he locks Sifu Eugene's leg under his elbow and prevents Sifu Eugene from striking. Such training, including an understanding of the combat philosophy involved, contributes much to making course participants into masters.

Why is this Application Not of a High-Level? 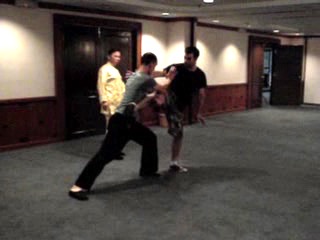 Sifu Innes and Sifu Eugene repeat the application of “Tiger Leans on Wooden Door” from another angle so that other course participants can see the movements more clearly and give their comments. This application, while tenable, is not of a high-level. Do you know why?

Leading to a Coup de Grace 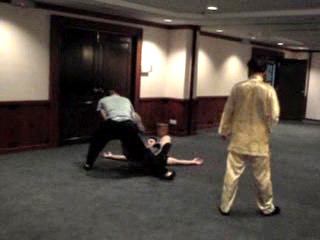 Merely holding an opponent's leg does not serve much combat function. Although you immobilize your opponent, you yourself are also immobilized indirectly. But you can use it as a mean to a coup de grace, like what is shown in this video. In a real fight, you must make his fall so that he breaks some bones, or you may follow up with a decisive blow.