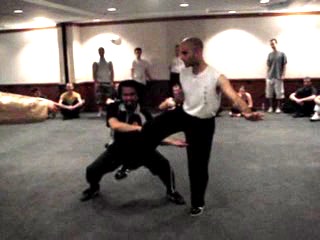 Systematic training enables you to respond correctly and spontaneously to attacks

Why is it that many kungfu practitioners find it hard to use kungfu in combat? It is because kungfu fighting is not natural, it is an art.

As in any art, to be proficient in kungfu combat requires not only time and effort but more significantly systematic training. If you merely free spar hoping to use kungfu techniques, it is not systematic. It will inevitably result in you fighting instinctively, i.e. without any art. 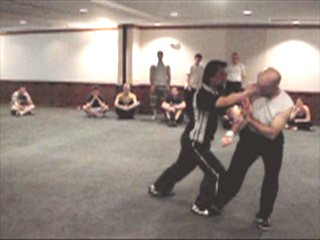 As Dr Damian presses down with “Fierce Tiger Descends Mountain”, Sifu Anthony turns around with a Tiger-Tail Kick. While this is a good counter, Grandmaster Wong says that he can have a better counter without having to turn around. Sifu Anthony thinks for a short while, then comes out with “White Crane Flaps Wings”.

Dr Damian thinks for a short while for a counter against Sifu Anthony's organ-seeking kick. Then he pushes away the kick and counters with “Bail Moon from Sea Bottom”. Grandmaster Wong says that a better counter is just to sit back onto a Horse-Riding Stance and strike the kicking leg with “Heavenly Priest Stamps Insignia”. Having gone through this practice, when an opponent executes an organ-seeking kick, Dr Damian can respond immediately using “Heavenly Priest” without thinking.

Preventing a Kick to the Groin 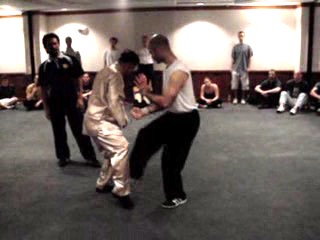 When your opponent is at a False Leg Stance, if you move in with a Bow-Arrow Stance, he may kick at your groin. Not many persons know this or are skillful enough to execute the kick effectively, but a basic kungfu principle is to assume that the opponent is capable. Hence, following the tenet of “safety first”, it would be better to retreat the front leg to a safe position before moving in.

One Movement Instead of Two 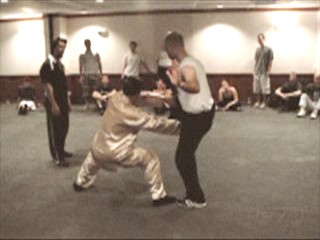 Footwork should be Alive 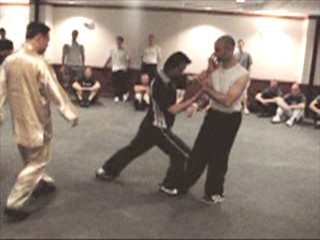 Earlier Grandmaster Wong advised Dr Damian to move the front leg back a step before moving the back leg forward so as to avoid a possible organ-seeking kick. But if the opponent is not near enough to kick, as in this case when Sifu Anthony has retreated his front leg, it may not be necessary to move a step back before moving forward. Hence, our footwork should be alive, not stereotyped. 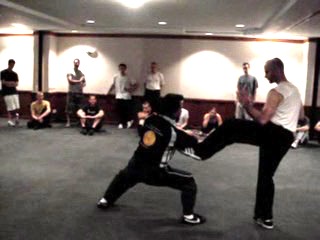 Sifu Anthony attacks with an organ-seeking kick. Dr Damian counters with “Bail Moon from Sea Bottom”. Sifu Anthony deflects the hand attack with his leg, followed with a toe-kick to vital points at the armpit or ribs, using the pattern “Golden Cockerel Stands Solitarily”. It is a good technique, and is called “Embracing Dragon Kick”.

Systematic Training is Essential for Combat Efficiency from Wong Kiew Kit on Vimeo.