MONKEY TECHNIQUES ARE FLOWING AND AGILE BUT CAN BE VERY DEVASTATING 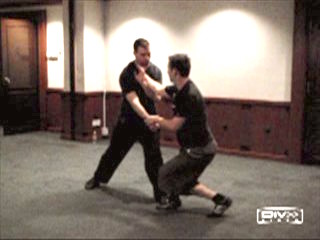 Monkey techniques are flowing and agile but can be very devastating

The Shaolin Monkey Set is flowing and graceful, and does not rely on muscular strength. Then, how is a Monkey stylist powerful enough to fight an opponent bigger in size? He uses internal force. In fact, Monkey techniques are well known to be effective for small sized practitioners against bigger sized opponents. Nevertheless, the Shaolin Monkey Set, especially with its “gorilla patterns”, is also combat effective for big sized persons.

An important technique of the Monkey Set that enables its practitioners to neutralize powerful attacks is the Monkey Paw. For example, the pattern “Spiritual Monkey Brushes Leaves” which uses the Monkey Paw, requires less force than “Single Tiger Emerges from Cave” to neutralize a similar punch. In attacking, the Monkey Claw can be devastating. It goes for an opponent's throat or his groin in patterns like “Golden Monkey Pluck Fruit” and “Beneath Leaves Steal Peach”.

Working out a Special Combat Sequence 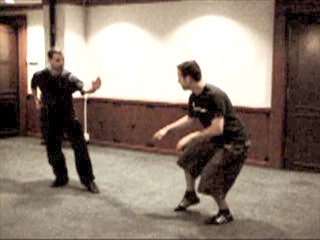 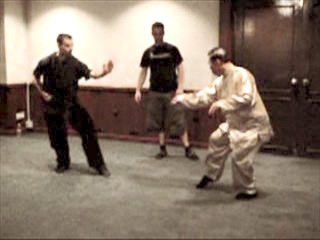 Grandmaster Wong advises Sifu Roland to be softer when applying the pattern “Spiritual Monkey Brushes Leaves” to deflect Charles' attack. The Monkey Paw used in this pattern is a very effective technique to neutralize an opponent's powerful attacking force.

Intricacies of the Monkey Paw 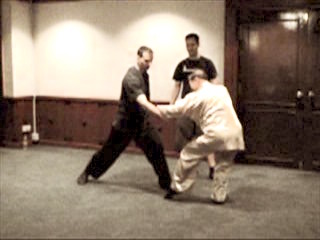 Here is one of the intricacies of the Monkey Paw. The manner Sifu Roland first applies it may give an opponent a chance to slip in to attack, which incidentally a Monkey specialist is expert at. You can control an opponent's hand with the Monkey Paw, and to counter-strike him when suitable.

Effectiveness of the Monkey Paw 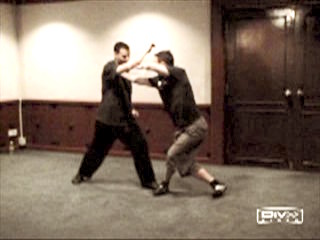 The combat effectiveness of the Monkey Paw is evident here. When Charles tries to move his arm away from the control of the Monkey Paw, he almost loses balance. Sifu Roland then grips his throat with the pattern “Golden Monkey Plucks Fruit”. Charles threads away the attack before it arrives.

How would you Escape from a Grip on your Throat? 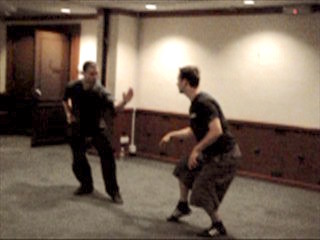 If you are fast enough to thread away the throat-grip attack, it is fine. But suppose your throat is being gripped. What would you do to release the grip? When an opponent's hand is already on your throat, if you thread the hand away or pull your head back, your own action will result in your throat being torn by the grip.

Grip on the Trachea

Charles pushes away the attacking grip using a Tiger Claw. This is possible if your sparring partner releases his grip. But if an opponent really grips your throat hard, this will tear away the trachea. Here is how a grip should be applied on the trachea.

Monkey Techniques are Flowing and Agile but can be very Devastating from Wong Kiew Kit on Vimeo.