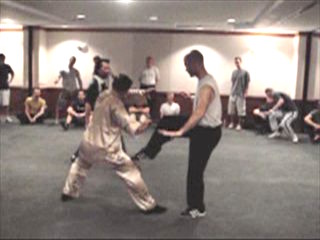 In this Special Shaolin Kungfu Course we raise our combat efficiency to higher levels not just by using more sophisticated techniques from our selected kungfu sets but also by enhancing our skills.

For example, by sinking our stance lower as we respond, we can not only be safer from an opponent's attack but smoother and faster in our counter-attack, although we use the same technique. By purposely slowing down our speed while we defend, we trick an opponent to slow down his momentum too. Then we suddenly speed up our counter-attack, we can catch him in surprise.

This video series captures some of the lessons on how we raise our combat efficiency from basic levels to advanced levels by enhancing both our techniques and skills.

Sinking the Stance in the Counter 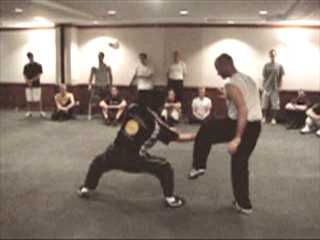 As Sifu Anthony attacks with an organ-seeking kick, Dr Damian counters with “Bail Moon from Sea Bottom”. The technique is good, but Grandmaster Wong suggests further improvement by sinking the stance in the counter. What benefits do you think this sinking of the stance can give?

How to Prevent your Ankle from being Dislocated 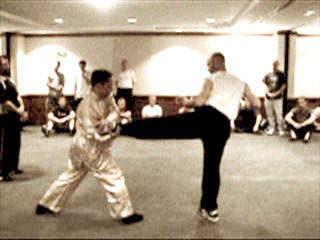 To prevent his ankle from being dislocated, Sifu Anthony turns his body with his foot and counters with a Tiger-Tail Kick. Grandmaster Wong advises that he must not place his two hands too far away as he kicks, otherwise there may not be enough reach.

Can Sophisticated Techniques be Used in Combat? 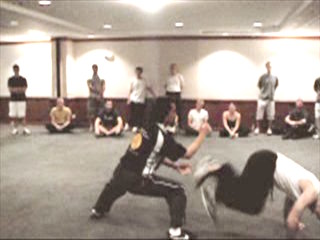 Sifu Anthony and Dr Damian review their improved combat sequence. Notice they now perform the techniques spontaneously and fast. Some martial artists today think that such sophisticated techniques cannot be used in combat. Many of them cannot even use simple kungfu techniques; they merely bounce about and use Kick-Boxing.

Regulating the Speed of Combat 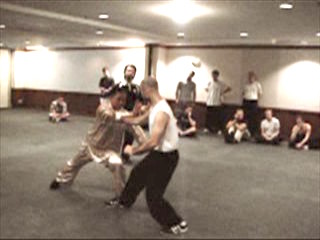 Now we can raise combat level from the perspective of time. The point in time we counter an opponent's attack can be at points 1, 2 or 3. At the beginners' level, we counter at point 1. Now we may allow the attack to come in further, and counter at point 3. This is one way we can regulate the speed at which we want the encounter to take place, usually without the opponent being aware of it.

Slowing down Defence and Speeding up Counter-attack 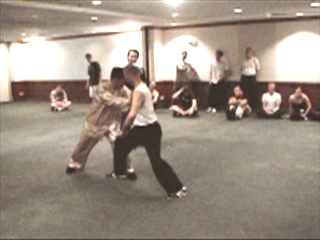 Grandmaster Wong gives an example of how to regulate the speed of combat as well as to confuse an opponent in the dimension of speed. First he slows down his own defence, which results in slowing down the opponent's attack. When the opponent is tricked to respond in this speed, he suddenly speeds up his counter-attack, catching the opponent by surprise. 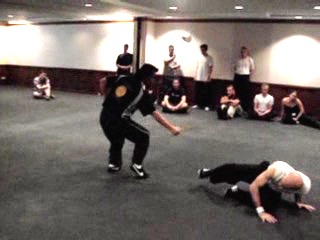