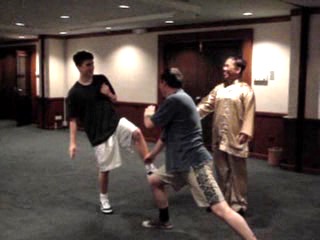 Some people, including kungfu practitioners, mistakenly think that kicks are uncommon or unimportant in kungfu. Its importance can been seen in the kungfu saying, “sau hai leong moon seen, chun pang kheik ta yen” (Cantonese), which means “hands are like two doors to open the way, it is kicks that hit opponents”.

There are more kicks in Shaolin Kungfu than all the kicks in other martial arts put together! This combat sequence of the Five-Animal Set, a representative set of Shaolin Kungfu, gives some examples not only of kicks, but how to open the doors with the hands to pave the way for kicks.

There is also a video clip to lay a trap for an opponent to kick. You must, of course, be ready for what to follow and have the necessary skills to carry it through. 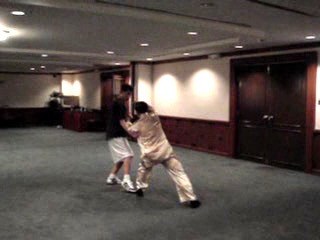 Nick holds Grandmaster Wong firmly. Using "Double Dragons Plays with Pearl", Grandmaster Wong releases the hold and counter-strikes. Many people think that both fists strike together in this pattern. Doing so may expose the exponent's head and body dangerously. The strike is executed with one hand, the other hand is to control or immobilize the opponent's hands.

Nick and Chris work out a combat sequence of the Five-Animal Set that involves some kicks. Chris blocks the kick then counter-attacks with Double Dragons. Grandmaster Wong explains that there is no need to block. He can straightaway strike the kicking leg.

Series of Attacks with Kicks 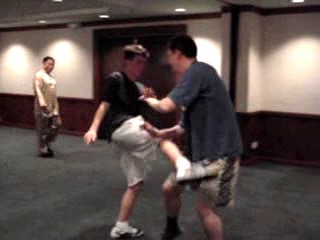 Nick and Chris continue their combat sequence work-out. Instead of using a “whip”, Chris now uses a leopard punch to strike Nick's kicking leg. Nick continues his attacks, including another kick. Grandmaster Wong suggests that he may incorporate knee strikes similar to those in Muay Thai, using the Shaolin pattern, “Jade Girl Kicks Shuttle”.

Raising the Level of Combat 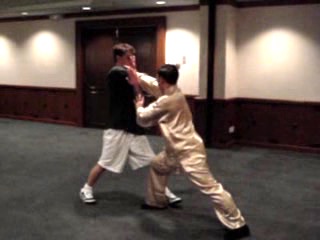 Grandmaster Wong shows Chris how he can raise the level of his combat. Instead of deflect Nick's “Poisonous Snake” with “Golden Dragon”, he can counter with “Fierce Tiger Descends Mountain”, or “Dark Dragon Draws Water”. 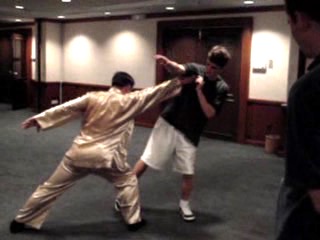 When Grandmaster Wong attacks Nick from a side with “Dark Dragon Draws Water”, his groin is exposed for Nick's organ-seeking kick. This is a trap. When Nick kicks, Grandmaster Wong deflects the leg and slices Nick with his palm from the groin up to the arm-pit or the throat.

Room for Spontaneity and Variation 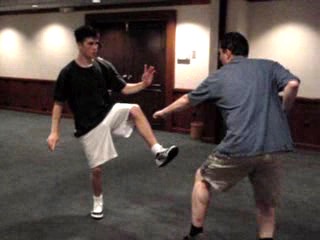 Nick and Chris resume their combat sequence. Notice that the movements are not rigidly the same, indicating that within some general guidelines, there is room for spontaneity and variation. Now Chris uses his left hand, instead of his right, to strike Nick's kicking leg. Grandmaster Wong advises him to use “Fierce Tiger Descends Mountain” instead of “Golden Dragon Plays with Water” in response to Nick's “Poisonous Snake”.