CAN SOPHISTICATED KUNGFU TECHNIQUES BE USED IN COMBAT? 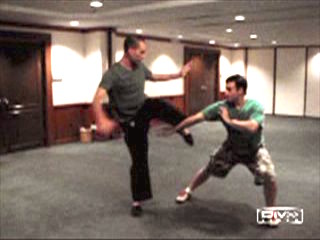 Can these sophisticated patterns from the Tiger-Crane Set be effectively used in combat?

The attacks and counters of the Tiger-Crane combat sequence shown in this video series are sophisticated. Many martial artists, including some masters, may say that these sophisticated techniques are unrealistic, and cannot be used in real fights.

This is no surprise. These same people do not even believe that simple kungfu techniques can be used in combat. They believe that in real fights only straight-forward punches, kicks and blocks are practical.

Suppose you attack your opponent with a straight-forward punch, and he responds with a counter that is not so simple, like any one of those shown in the videos below. You straight-forward blocks would not be adequate. You would be forced to use a not so simple defence or counter. This was how sophisticated techniques evolved from real fighting. Participants at the Special Shaolin Kungfu Course relived this process. The video clips below show some examples. 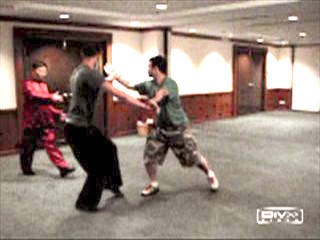 As Sifu Innes attacks, Sifu Eugene responds with Double Butterfly Palms, not only neutralizing the opponent's attack but also countering striking him at two points. Of course it needs much skill to execute the Butterfly Palms effectively. 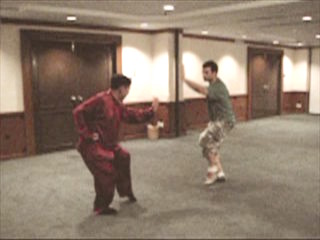 Having good stances is important in being able to move back a step in a difficult situation. If an attacker throws his body forward, as is common in some martial arts, it would be easy for Sifu Eugene to strike the attacker with his Butterfly Palms. 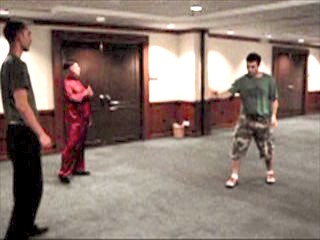 Many martial artists do not pay attention to this aspect of footwork known as “differentiating yin-yang”. Differentiating yin-yang in this case means that as you move forward, your body weight is on the back leg so that you can readily make appropriate adjustment with your front leg. If an opponent throws his body forward, like a Boxer often does, you can strike him with the Double Butterfly Palms.

The Importance of Right Spacing 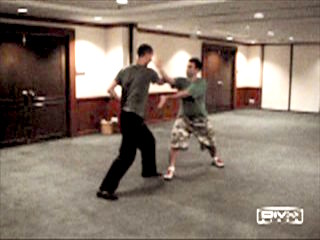 Sifu Innes separates the Double Butterfly Palms of Sifu Eugene, and counters with an organ-seeking kick. The spacing is incorrect. If the exponent for some good reasons chooses to kick with the left leg, he can initiate with a Fierce Tiger instead of a Black Tiger. 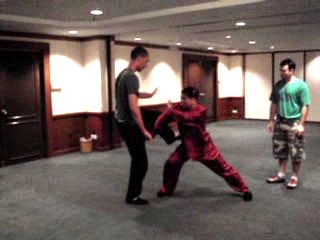 Sifu Eugene deflects the deadly organ-seeking kick with the pattern “Enter Sea to Search for Shells”. The response using the pattern “Hungry Crane Search for Prawns” can be improved. Notice how this Hungry Crane pattern is applied, with the beak going for the prawns. Many people who perform this pattern may not know this application. 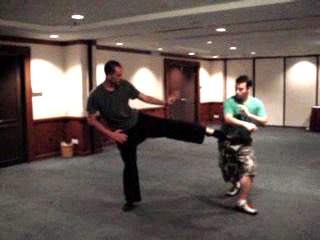 Sifu Innes neutralizes the prawn-seeking crane attack with his leg, and counter with a tiger-tail kick. Sifu Eugene responds with the tactic of “no defence direct counter”, striking the kicking leg with the pattern “Dark Dragon Wags Tail”. 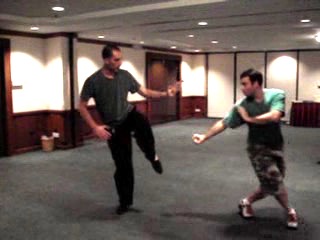 Sifu Innes and Sifu Eugene go over the combat sequence with improvements. Instead of turning around from his Unicorn Step as he did in the previous video clip, Sifu Innes moved forward into a Bow-Arrow Stance. 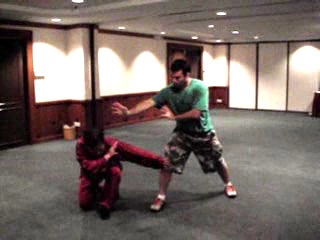 Here is another improvement to the combat sequence. As Sifu Eugene moves in to attack at the end of the sequence, instead of completing the sequence you may squat down and counter with “Hungry Tiger Returns to Den”.

Sophisticated Sequence Evolved from the Basics

Sifu Innes and Sifu Eugene go over the combat sequence with the various improvements. This sequence is quite sophisticated, but it is evolved from our basic combat sequences. Can you tell what basic sequences are involved, and how would you counter the Hungry Tiger attack at the end?

Can Sophisticated Kungfu Techniques be Used in Combat? from Wong Kiew Kit on Vimeo.