THE BENEFITS OF UNDERSTANDING AND APPLYING KUNGFU PHILOSOPHY 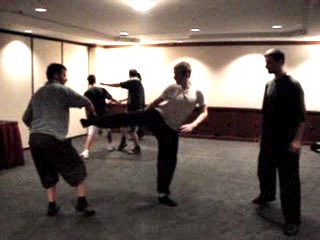 Besides working out their combat sequence, Sifu Roland, Nick and Charles are discussing the philosophical points underlying their patterns

For convenience, kungfu may be classified into four aspects, namely form, skill, application and philosophy. Most kungfu practitioners today neglect philosophy. This is one main reason they do not derive as much benefit as they should given the time and effort they have spent. Philosophy is like a map — it shows us our destination as well as the routes.

This and the following video series show course participants discussing kungfu philosophy in relation to the combat sequences that they formulate. In particular they discuss the reasons for their choice of patterns, whether there are better alternatives, and what advantages and disadvantages are present. Such a discussion not only enhances their kungfu performance but also enrich their daily lives.

Philosophy should serve us, not enslave us — a trap even some masters have fallen into! Some masters, for example, are captivated by the high-sounding terms of kungfu philosophy, but do not really know what the term means or be able to apply the philosophy to enhance their kungfu. The onus of kungfu training is practical benefit, for combat as well as daily living, not merely intellectual pleasure.

The Importance of Waist Rotation 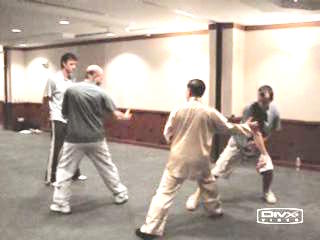 Grandmaster Wong demonstrates the mechanics and effectiveness of waist rotation in releasing a double hand grip on the arm. Rotating the waist is much emphasized in Taijiquan, though many Taijiquan practitioners fail to realize its importance or even perform the movement correctly. It is equally important in Shaolin Kungfu. 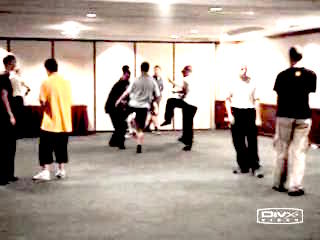 Philosophy is an important aspect of our kungfu training. Many kungfu practitioners, however, neglect this aspect. This video clip shows course participants discussing the background philosophy of their attacks and responses. 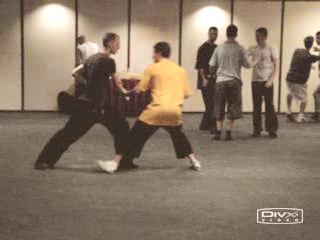 We can derive a lot of benefits from understanding and applying kungfu philosophy. One benefit, as shown in this video clip, is that we are aware of different ways to attack and respond, and are able to make a wise choice as well as why we make that choice. Many other practitioners merely attack and defend randomly. 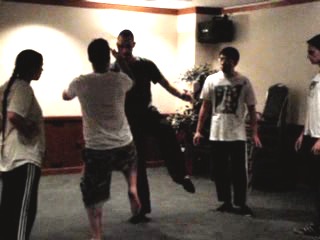 Steve, Andy and Eugene Butterworth are discussing how to apply the Tiger-Claw, while Molly, Sifu Innes, Sifu Eigene Siterman, Wuji and Alex are discussing various ways to counter an organ-seeking kick. Such philosophical discussion enhances their practical performance as well as help them to use kungfu principles to enhance their daily lives. 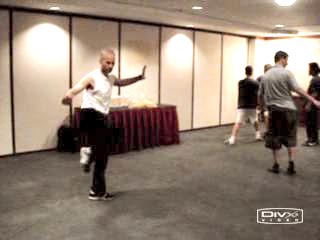 While the others work in groups, Sifu Anthony has to work alone because he is the only one in this course who specializes in the Shaolin Pakua Set. Does this mean he will miss the benefit of philosophical discussion as well as other team activities? Of course not. In fact this video clip reveals Sifu Anthony working out on his own the philosophy of the patterns he is performing.

Building up Philosophy from Experience

In the foreground, Sifu Roland, Nicholas Jones and Charles are working out an effective counter against a kick. They analyze various factors involved, like the advantages and disadvantages of this counter, and the possible responses an opponent would make. These points will build up a sound philosophy for these moves.

Deliberating on the Choice of Patterns 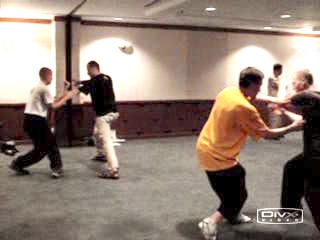 Nicholas Kryder and Peter are working out a combat sequence from their Dragon-Form Set. Their movements are smooth, though they are conserving their force, because they have formalize their sequence after satisfactory philosophical deliberation earlier on. Daniel and George, on the other hand, stop at various points of their sequence to deliberate on the choice of their patterns. 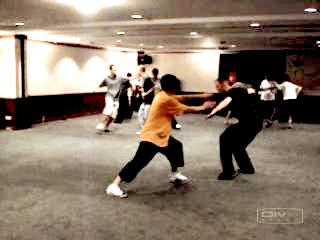 We must not be tied down by philosophy, as some arm-chair masters have fallen victims to. Some masters attempt to make their arts look grand by highlighting philosophical points, but often without really understanding what these points mean. The fundamentals of any art are practical experience and benefits. Its philosophy is meant to explain and enhance the experience and benefits, not to mystify them. 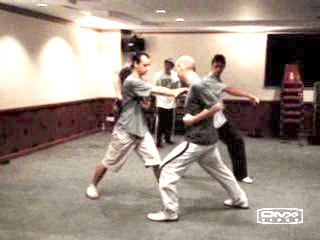 What would you do if an opponent pulls your arm and simultaneously strikes at your ribs? Eugene is able to respond correctly because he understands, consciously or unconsciously, the philosophy of flowing with the opponent's momentum. Nevertheless, he has to consider how to do so effectively, which further contributes to his understanding of kungfu philosophy.

Benefits of Understanding and Applying Kungfu Philosophy from Wong Kiew Kit on Vimeo.