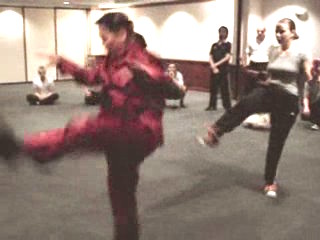 The Tiger-Crane Set manifests the “hard” and “soft” of Shaolin Kungfu. “Hard” and “soft”, however, are relative and complementary. Hard tiger patterns, for example, can be soft, and soft crane patterns can be very hard. 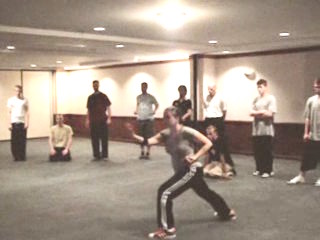 Much attention is paid to details to enable students to attain excellence. Notice how Molly performs the set. Note, for example, the sinking of chi to the dan tian, and the rotation of the waist. 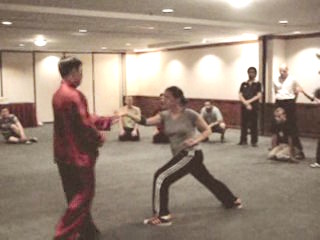 This is the greeting from Uncle Righteousness' lineage, and it contains the patterns “Black Tiger Presents Claw”, “White Crane Flaps Wings”, “Dragon and Tiger Appear” and “Two Tigers at Ready”. After the greeting, Molly proceeds to the patterns “Show Dragon Hide Tiger”, “Four Fingers Piercing Sky” and “Flying Bird Flaps Wings” in the Tiger-Crane Set. 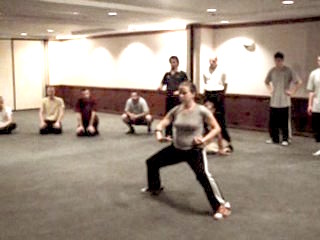 Molly proceeds to the patterns “Tiger Leans on Wooden Door”, “Tame Tiger with String of Beads”, “Wealth God Tames Tiger”, “Hungry Tiger Returns to Den”, “Fierce Tiger Pushes Mountain”, and “Single Tiger Emerges from Cave”. Notice the stance in the “Single Tiger Emerge from Cave” pattern here is quite different from the one we normally use. 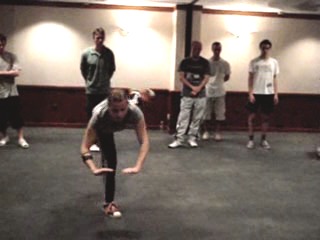 Spirit of Tiger shown in Eyes 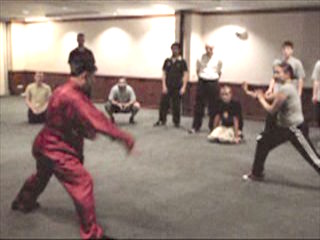 Here are the patterns “Hungry Tiger Snatches Goat”, “Fierce Tiger Returns to Highland” and “Thousand Tons Towards Ground”. The spirit of the Tiger should be shown in the eyes. 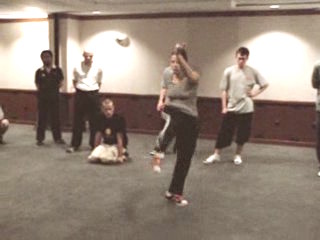 The Secrets of the Crane Patterns 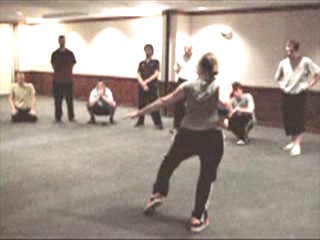 Agility and Solidness of Unicorn Step 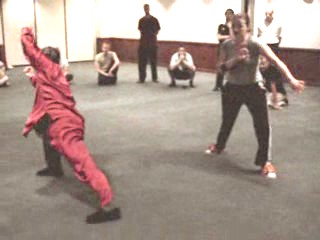 The agility as well as solidness of the Unicorn Step in patterns like “Drunken Eight Immortals” and “Dark Dragon Wags Tail” are demonstrated, manifesting the principle of yin-yang harmony. It may appear odd to the uninitiated to find movements that are agile and solid at the same time. Other patterns shown are “Fisherman Casts Net” and “Lohan Emerges from Cave”.

More Energy at End of Set than at Beginning 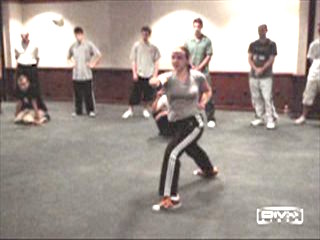 The concluding patterns of the 36-pattern Tiger-Crane Set are “Return Head Tiger-Tail”, “Black Tiger Steals Heart”, “Show Dragon Hide Tiger”, “White Crane Flaps Wings”, “Tiger and Crane Sound Together” and “Dragons Return to Den”. It is significant to note that Molly is not tired or panting for breath after performing the Tiger-Crane Set. She enjoys a gentle chi flow and has more energy at the end of the set than before she started.

Tiger-Crane Set -- Manifesting the Hard and the Soft in Shaolin Kungfu from Wong Kiew Kit on Vimeo.