PATTERN ANALYSIS OF THE DRAGON-FORM SET 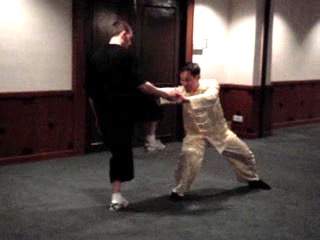 It is incredible but true that if you are skillful you can apply just one pattern to counter any attacks!

It was a fact that great masters in the past were graceful and flowing, yet very powerful and combat efficient, and we are blessed to have similar attainment. Others who believe otherwise can keep their opinions.

Paradoxically, many secrets are revealed in these video series, which are actually meant for our own students, but others may enjoy them if they wish. In this video series, the secret in applying only one pattern to counter any attacks is revealed. The pattern shown here is “Swimming Dragon Plays with Water”, a signature pattern in the Dragon-Form Set. An example from “Green Dragon Shoots Pearl” is also shown. 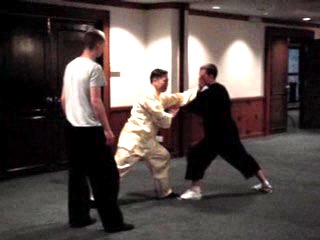 Peter and Adam perform the Dragon-Form Set. After the force training section using “Double Dragon Emerges from Sea”, they move to the next pattern, “Lohan Asks the Way”, but in a Bow-Arrow Stance. Grandmaster Wong asks them to demonstrate a combat application of the Lohan pattern. 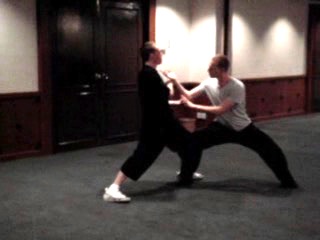 The next pattern is “Swimming Dragon Plays with Water”, which is a signature pattern in the set. There are many beautiful applications with this pattern. Adam and Peter shows one of them. Adam grips Peter's arm with two hands, and Peter releases the grip and simultaneously counter-attacks using this Swimming Dragon pattern.

Striking Opponent when his Attack is just Spent 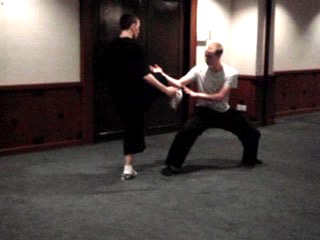 “Swimming Dragon Plays with Water” is a very versatile pattern. Here, Peter applies it to counter a kick. However, his initial movement is incorrect as it is too hard. Peter corrects it and flows with the opponent's momentum, striking the opponent when his kick is just spent. 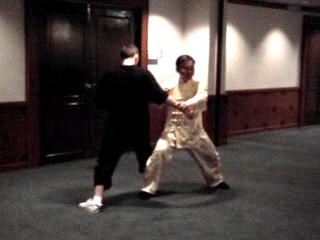 Grandmaster Wong reveals the subtle movement of the “Swimming Dragon” pattern. It does not block the kicking attack, but flows with the kick. Hence, little effort and strength, but much skill is needed

If the opponent drops his leg forward after the kick, as shown in the previous video, you strike him as he leans forward. If he is too close, you may have to move a small step backward to attain ideal spacing. If he has good balance, you move your body slightly forward without moving your feet, to strike him.

Swimming Dragon against any Kicks 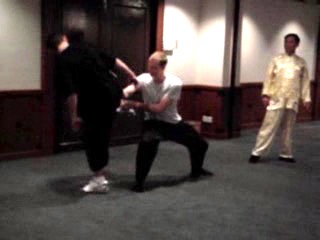 Against Side Kick and Round-House 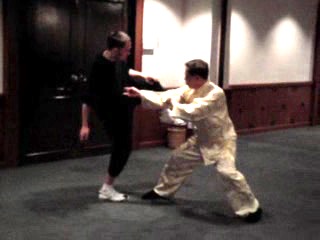 Grandmaster Wong demonstrates the spacing and mechanics involved in countering kicks with “Swimming Dragon Plays with Water”. After the side-kick has past, shift the body forward to strike the opponent, taming his leg with the other hand. If you strike him while he executes a round-house kick, his kick may break your arm. Hence, you have to move following the direction of the kick as your strike.

Changing Steps to Counter Round House 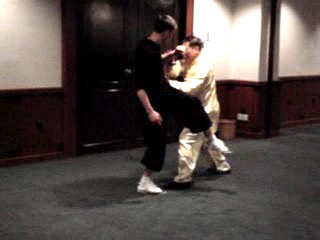 Instead of moving to your left as an opponent executes a left round-house kick, you can move back to avoid the kick, change steps and move forward again to strike the opponent with a dragon-hand. The crucial point is not to block the kick. Just let the kick pass. 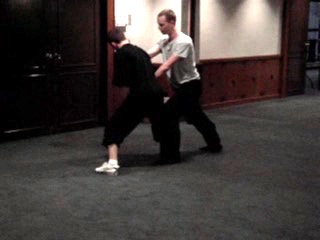 In the Dragon-Form Set, after “Swimming Dragon Plays with Water” is the pattern “Green Dragon Shoots Pearl”. This is another very versatile pattern capable of countering almost all attacks. Here, Peter demonstrates its use against a backward throw.