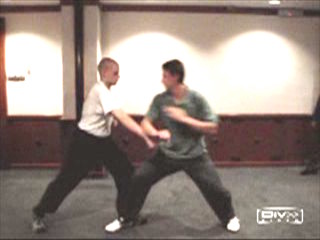 Daniel and Steve employ strategies in their attack and defence

Most people today fight haphazardly, i.e. their attacks or defences are impromptu and isolated. For example, they throw a punch or a kick without pre-planning. Their next attack is not related to their earlier movements. When their opponent attacks them, they think of how to respond or they react instinctively.

A systematically trained Shaolin practitioner does not fight in this haphazard way. First, he employs techniques appropriate for the combat situations. When an opponent attacks him, he does not hesitate to think of what to do; he already knows beforehand how to react correctly to various forms of attack.

Then he seeks or works out advantageous ways in his attack and defence using tactics and strategies. For example, instead of executing a kick straightaway, he may tempt his opponents to attack first, then kick when they least expects it. This is using tactics.

His attacks and defences are not executed in isolation, but flow in sequences. What sequences to use and what patterns are used in each sequence are planned beforehand. He may even plan so that his opponents, without being aware of it themselves, fight in a way he has planned. This is using strategies.

Some simple strategies in attack and defence are shown in these video clips. They involve various modes of applying combat sequences.

But what should you do if your opponents react outside the manner you have planned, which is usually the case in real fighting? (But a master can be so skillful in using strategies that his opponents actually fight the way he has planned) You make modifications, then resume your planned strategy. This aspect has actually been touched upon in earlier videos, and will be dealt with in later progression. The video series here records the stage where whole sequences without modifications are used. 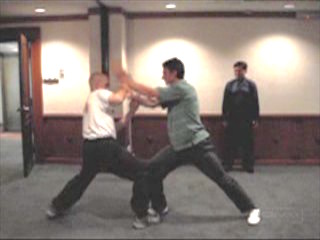 Here Steve attacks Daniel with a pre-planned mode. But Grandmaster Wong intercepts to explain an important point. A pattern in Sequence 8 should be “Attend Conferrence with Single Knife” which is a chopping attack, instead of “Bar the Big Boss” which is a defence technique. The former is a counter-attack which breaks the attacker's arm whereas the latter deflects the attack. 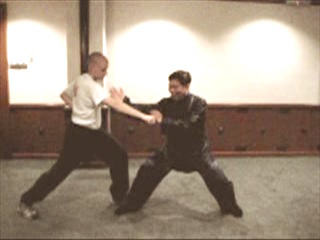 The Strategy of Continuous Sequences

Steve attacks with a strategy. He initiates with Sequence 7 and continues with Sequence 8. He can make it confusing for the opponent by varying the second sequence. Daniel can defend against the attacks because he has been trained. Most untrained opponents would be at a lost when faced with continuous attacks executed as a strategy.

Intercepting to Break an Opponent's Arm, Not your own Fingers 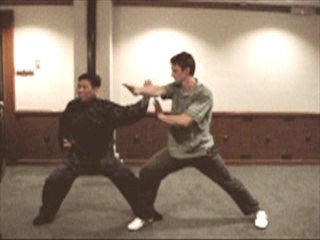 Grandmaster Wong explains the fine points in intercepting a horizontal sweep. You need to sink back to a sideway Horse-Riding Stance so as to avoid the sweep even if you do not intercept it. When you intercept, you should ensure you use the edge of your palm, and not your fingers or else his sweep may break your fingers.. Your palm cuts into his upper arm or wrist to break it.

Having a Strategy in Attack or Defence 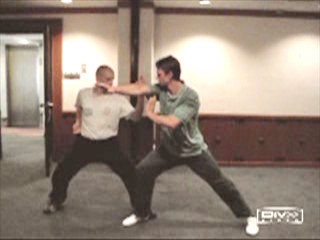 Steve's strategy is to attack with Sequence 8. Daniel continues with Sequence 7. Steve may use other sequences to attack, and Daniel may use other sequences to respond The important point here is that you must have a plan or strategy to attack, and a strategy to respond. This is certainly a big advantage over those who attack and defend randomly. In other words, if you have a strategy, even a simple one like those shown here, in your attack and defence you have a better chance of beating your opponent.

Fighting at Sequence-Level to Defeat Opponents 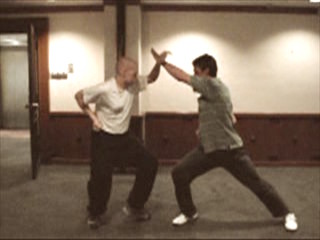 Steve's strategy is to attack with Sequence 7. As Daniel hesitates to respond, he continues with Sequence 8. This is planned before-hand. Steve does not pause at each pattern, or even at the end of a sequence to think what to do next. Before he attacks, he has in mind he is to use Sequences 7 and 8. At the end of Steve's second attacking sequence, Daniel responds with Sequence 7. As many people are not trained to fight at the sequence-level, if you apply your sequences flowingly, you have a good chance to defeat your opponents.