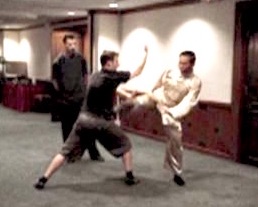 Just as when you think you have defeated your opponent, he defeats you with an apparently simple movement

Displayed in the training hall of the first Shaolin Wahnam school in Sungai Petani, Malaysia was the following poetic couplet:

This poetic couplet was taken from the poetic saying of the Venerable Harng Yein, who was the most senior disciple of the Venerable Chee Seen, the First Patriarch of Southern Shaolin Kungfu.

This video series give some examples of marvelous techniques.

Defeating your Opponent when he Thinks he has Defeated You 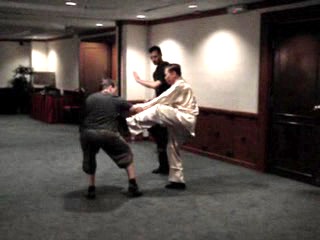 Here is another marvelous technique. If an opponent moves in to attack your groin after you have kicked, instead of moving back or moving in, you can deflect his attack with your leg, grip his arm and counter-attack with your kick. This is a variation of the pattern “Yellow Oriole Drinks Water”, and of “Rising Dragon Galloping Tiger” in the Monkey Set.

Yet Another Monkey Trick 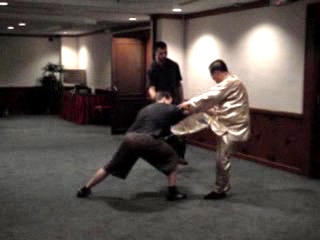 The Monkey is full of tricks, or marvelous techniques. As Sifu Roland moves in with a “hanging fist”, you can move back to deflect the attack using “Separate Leaves to Search for Flowers”, followed with “Rising Dragon Galloping Tiger” as a counter-attack. You trick an opponent to move in to attack, then counter-attack when he least expects it.

Don't Hand your Defeat to your Opponent 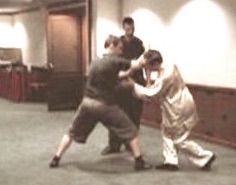 Charles makes the same mistake of adopting a disadvantageous stance. In kungfu terms, this is handing your own defeat to your opponent, without him doing anything extra. He just needs to exploit your disadvantage, but in today's low level of combat, not many martial artist know how to do so. Sifu Roland is well trained, he exploits the situation.

Just Move Back a Step 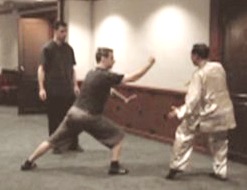 If you are caught in a difficult situation, in kungfu or in real life, and you do not know what to do, just move back a step. A Monkey stylist is agile, but not clumsy. He is also not flimsy. He is very mobile and at the same time very solid.

Turning a Difficult Situation to your Advantage 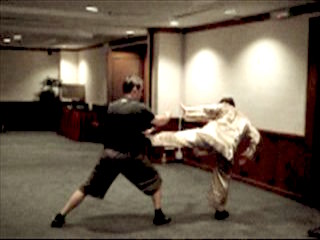 Dim Ching or Pointing out the Essence 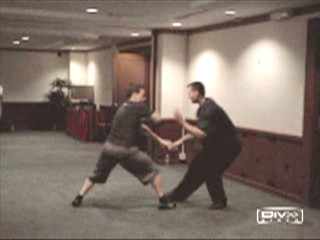 Charles learns very fast. He turns a difficult situation into his advantage and successfully counter-strikes his opponent. In kungfu culture there is a term called “dim ching” (Cantonese), which literally means “point essence”. It means that a student is at first all confused, but when his sifu points out the essence, he becomes “enlightened”. Without “dim ching”, students may remain kungfu gymnasts or crude boxers all their life.