FROM SIMPLE TECHNIQUES TO SOPHISTICATED PATTERNS 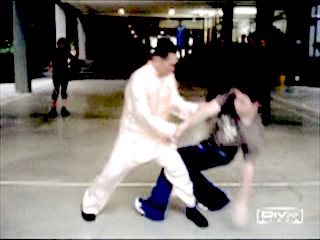 If an opponent grips your arm and simultaneously fells you onto the ground like what is shown in the picture above, you need more sophisticated patterns than mere punching and blocking to counter the simultaneous attacks

Some people think that kungfu patterns are too complicated to be combat effective. They believe, incorrectly, that techniques are effective for fighting only when they are simple, like straight-forward punches and kicks.

But even an elementary Shaolin Kungfu class shows that when fighting progresses to higher levels, more sophisticated techniques are needed. If an opponent successfully grips your arm, for example, relying only on Boxing techniques would be inadequate. Past fighters experienced such sophisticated combat situations in real fighting, and evolved sophisticated counters against these attacks. These sophisticated fighting methods now come to us in crystallized forms as kungfu patterns.

Making it Difficult for Opponent to Defend

The finer points of the knee attack in the pattern “Golden Cockerel Stands Solitarily” are shown. Not only the Shaolin exponent prevents the opponent from counter-attacking, he also makes it difficult for the opponent to defend himself. If the opponent manages to wriggle free and attack the exponent's groin, the exponent can deflect the attack with his knee.

The Secret of Continuous Kicks

Here the counter is demonstated from another angle. The Shaolin exponent brushes away the second kick, and counter-kicks the opponent's knee, followed by another attack on the opponent's head. These exchanges are possible with kungfu practitioners. Boxers and other martial artists are unlikely to be familiar with these techniques.

Felling Opponent When his Left Leg is in Front

The pattern “Lead Horse Back to Stable” is used to fell an opponent. It is useful when both you and your opponent have the left leg in front. Of course, when you are familiar with these techniques, it does not matter which leg you or your opponent have in front.

How would you counter if your opponent applies “Lead Horse Back to Stable” on you? A good counter is “Hiding Flowers in the Sleeves”. Make sure you cover your opponent's hands as you strike him. You may recall that this attack and counter are found in Combat Sequence 14 of our basic Shaolin sparring methodology.

If a kungfu practitioner grips the arm of a Boxer, the Boxer would have no techniques to counter. Notice that in this counter the movement follows, not goes against, the attacking momentum.

From Simple Techniques to Sophisticated Patterns from Wong Kiew Kit on Vimeo.