VARIOUS TACTICS TO HANDLE A BOXER 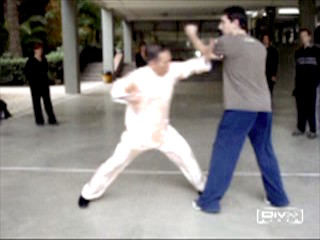 As soon as a Boxer moves his hand, you can close him and strike him

Besides kicking a Boxer as soon as he uses his right hand, you can also kick him when he uses his left. For convenience, this tactic is called “kick when left”.

There are also other tactics to handle a Boxer. The class goes over the numerous other tactics learnt and practiced in previous lessons, such as closing or opening the Boxer and simultaneously striking him.

Chase Boxer if he Retreats

This is a progression of the “kick when right” tactic. If your opponent moves back as you kick, chase after him and strike him, taking care to close him as you attack. Various ways of chasing have been dealt with in previous video series.

Participants may close the Boxer as soon as he jabs his right hand, and simultaneously strike him, like what has been practiced earlier. But this “close and strike” tactic is temporarily suspended for the time being, and practicitpants practice the newly learnt “kick when right” tactic.

Here is another tactic using kicks. As soon as a Boxer uses his left hand, lean back and kick, follow with strikes, taking care to cover the Boxer as you attack. This is a “kick when left” tactic.

Applying Various Tactics against A Boxer