KICK A BOXER WHENEVER HE USES HIS RIGHT HAND 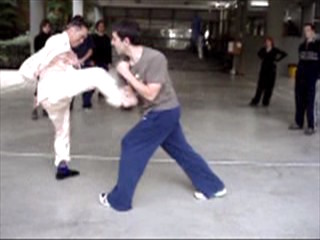 As a Boxer attacks with his right hand, bend backward or sideway and kick him

Handling a Boxer is technically easy. This is because a Boxer's techniques are limited. But this does not necessarily mean you will defintely defeat a Boxer. If he is skillful, he can beat you even when you know many techniques against him.

There are actually many effective ways to handle a Boxer. One effective way or strategy dealt with in this video series is to apply kicks. There are a few tactics to implement this strategy. One useful tactic is to kick him whenever he uses his right hand.

Basically, the tactic works as follows. When he uses his left hand, just brush it away, keeping yourself a safe distance so that he cannot reach you. But as soon as he uses his right hand, execute a side kick at him and follow with strikes.

How Many People would React

Simply because they have not been trained to respond correctly, many people would retreat when facing a Boxer. This of course is what we should not do. We have so many ways or tactics to handle a Boxer.

Close a Boxer and Strike Him

There are many effective ways or tactics to handle a Boxer. One tactic, which has been dealt with in previous video series, is to close a Boxer and strike him, giving him little or no chance to counter-attack. For convience, we call this "close and strike" tactic.

Another effective tactic shown in this video series is to kick a Boxer. Firstly, you let him come in to attack. Then, at an appropriate time, you “tame” his hands and simultaneously kick him, followed by strikes.

Bait a Boxer and Wait for an Opportunity

The tactic is repeated in slow motion. Just parry with him when he uses his left hand. The purpose is to bait him and wait for an opportunity. When he starts to use his right hand, kick him and follow up with a strike. The "kick when right" tactic can be applied with a left kick or a right kick.

The tactic is demonstrated again. It is quite simple. Brush his left hand away no matter how many times he uses his left hand. But as soon as he uses his right hand, kick him, and follow with a strike, taking care to cover him as you attack.

Kick a Boxer Whenever He uses his Right Hand from Wong Kiew Kit on Vimeo.