CHASING AFTER A BOXER'S RETREAT 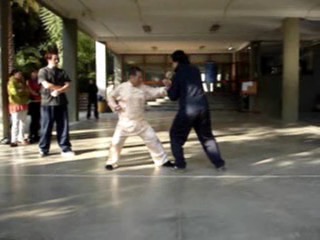 As your opponent retreats, you can chase after him to bridge the gap and simultanously strike him

When you employ pressing attack on a Boxer, he often bounces away to avoid the press, and then bounce back to attack you.

Anticipating this response, you can plan an effective counter-tactic against him. As soon as he bounces away, you follow closely to bridge whatever gap he wishes to create for his escape, still covering his hand and striking him. This tactic, or technique, is called the “chase”.

Bouncing away may appear fast, but is technically slower than kungfu footwork. You can cover in one step or one movement the space a Boxer would need two steps or two movements to create. You can also vary your reach by using different stances, like the False-Leg, the Bow-Arrow or the reversed T-Step.

When you press onto your opponent with a “taming hand”, he could not move forward to counter-attack. But if he is a good Boxer, he can bounce away, and bounce back to counter-attack. If you are well trained, you can follow his bouncing away to bridge the gap, maintain the “taming technique”, and strike his arm or head or any part of his body with leopard punches.

Tim practices this newly learnt technique of bridging, taming and striking, which is called the “chase”. You chase after the opponent if he tries to moves away. You must, of course, cover yourself when you chase. Many people may not know what to do when you continuously chase, cover and strike.

When you strike a Boxer, he may deflect your attack by parrying. You can cover his defending hand and strike again. Or you can straightaway strike his defending arm with a leopard punch. If he moves away, you chase after with another leopard punch. This footwork technique is called “one-step chase”. As an opponent moves one step away, you bridge the gap by moving forward one step too.

Covering yourself and Striking while Chasing

Tim now applies the newly learnt technique of “one-step chase”. Of course, you do not merely chase after your opponent; you strike him as you chase, taking care to cover yourself in your attack, including covering your opponent's legs. A Boxer does not normally kick, but we do not take chances. We still cover his front leg making it difficult for him to kick.

Bridging the Gap with Appropriate Stance

In the one-step chase shown you used a False-Leg Stance while striking the Boxer with a leopard punch. But if he is further away and adopting the False-Leg Stance cannot reach him, you have to bridge the gap with the Bow-Arrow Stance as shown in this video clip. It is still called a “one-step chase” because only one step is involved. Hence, if the opponent is close by, you use a False-Leg Stance. If he is further away, you use a Bow-Arrow. If he is even further, you may use two or more steps to chase, which will be shown later.

Smooth and Spontaneous Movement through Practice

Tim applies the newly learnt technique of chasing and striking an opponent. Of course, when you first learn and practice the chasing technique, you may be slow and hesitant. But with practice, the movement must be smooth and spontaneous.

Using Shaolin Kungfu to Chase after a Boxer's Retreat from Wong Kiew Kit on Vimeo.