VARIOUS WAYS TO FELL AN OPPONENT 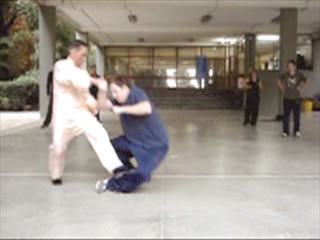 There are many ways to fell an opponent. Three main ways, with different variations, are demonstrated and explained in this video series, and they are implemented in the patterns “Fell Tree with Roots”, “Lead Horse Back to Stable” and “White Crane Steps on Snow”.

If an opponent has his right leg in front, “Fell Tree with Root” would be an effective pattern to fell him. If he has his left leg in front, it would be more advantageous to use “Lead Horse Back to Stable”. The mnemonic, “When a tree is right, fell it. When a horse is left in the open, lead it back to its stable”, may help beginners to remember choosing the most appropriate pattern.

You may use “Fell Tree with Root” when your opponent has his left leg in front if you make some adjustment. On the other hand, “White Crane Steps on Snow” can be used to fell an opponent irrespective of which one of his legs is in front. But when you are familiar with these techniques, it does not matter which of your opponents' legs are in front for you to fell them easily.

There are many other ways to fell an opponent. One effective way is shown here, using the Shaolin pattern “White Crane Steps on Snow”. Be very careful that you do not break your partner's leg when you apply this technique.

Anchoring at the Right Leg

Here is how to throw a Boxer who attacks with an undercut. First the Boxer throws a few jabs, which you can brush away. When he throws a right undercut, sink back to avoid the powerful attack, brush aside the attack arm and fell the Boxer onto the ground.

Anchoring at his Left Leg

Brush away the Boxer's jabs. When he attacks with a right undercut, sink back and brush aside his attack, and fell him onto the ground. Move a big step forward to anchor your right leg behind his right leg as you apply the felling technique. The felling technique can be used even when he uses other right-hand attacks apart from an undercut.

Instead of felling the opponent using “Fell Tree with Roots”, you can also fell him with the pattern “White Crane Steps on Snow”. The movements are similar. If his front leg is not his right leg, move a big step forward to his back right leg, and step on it. When you practice with a partner, make sure you step gently so that you would not break his leg as he falls.

If you apply the technique correctly, you can fell an opponent who is physically stronger and bigger in size than you. You don't even need internal force for the felling technique. But you need to have good stance and footwork.

Here is another felling technique with the pattern “Lead Horse Back to Stable”. The opponent's front leg is his left leg.