ADVANTAGES OF THE BOW-ARROW STANCE OVER A BOXER'S FOOTWORK 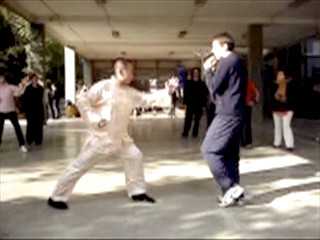 Stances give Shaolin Kungfu practitioners many advantages over Boxers. The Box-Arrow Stance is very useful when fighting against Boxers.

When you extend your hands while sitting at a Bow-Arrow Stance, for example, it is difficult for a Boxer to move in to attack you, without exposing himself to sudden counter-attack.

By sinking the Bow-Arrow Stance backward, you can avoid a Boxer's attacks without having to move your legs. Then you can shift your body forward again to strike him. This gives you superior technical speed.

A step in a Bow-Arrow Stance covers about the same space a Boxer makes in two steps of bouncing. This again gives a Shaolin practitioner technical speed.

Sinking Back without Moving the Legs

Even when a Boxer extends his arm fully in a strike, you can avoid it by sinking your stance backward without moving your legs. You should also deflect his strike to one side. But if his strike is too close, you can retreat your front leg into a False-Leg Stance.

It is not necessary to move your front leg backward when avoiding a Boxer's strikes. It is often sufficient if you just move shift your body backward. It is necessary to close him with your Tiger-Claw.

The mechanics of closing a Boxer is shown. Basically, you use your left Tiger-Claw to close him and your right fist or leopard punch to strike him.

Difficult for Boxer to Attack you

With your out-stretch arms at your Bow-Arrow Stance, you can readily keep a Boxer at bay. As soon as he tries to reach out his hand to attack you, you deflect it away and close him with your left Tiger-Claw. By controlling his front hand, it is difficult for him to attack you, but you can strike him with your right hand.

Advantages of Shaolin Bow-Arrow Stance over a Boxer's Footwork from Wong Kiew Kit on Vimeo.