FELLING AN OPPONENT AS HE ATTACKS WITH AN UNDERCUT 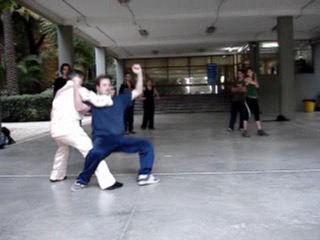 Undercuts, known as “thong thien pau” or “Cannons to the Sky”, are formidable attacks. Many people are at a loss as how to deal with such attacks as they can be very powerful.

Actually they can be countered quite easily — if you know how. Firstly, don't block an undercut or a “Cannon to the Sky”. Doing so may break your wrist or arm, or at best places you in an unfavorable position.

A good counter is to sink back to avoid the undercut, then move forward to fell the opponent. The video clips in this series will show you how.

How to counter a Boxer's undercut, which is similar to the Shaolin pattern “Cannon Punch towards the Sky”, is shown. Don't defend against the attack. Counter it with a throw, using the pattern “Fell Tree with Roots”.
The size of the video clip is 1.26 mb.

Don't block an undercut. Sink back your body to “swallow” it, then brush away the attacking arm and fell the opponent. Notice that here the opponent's front leg is his right leg, which makes it easier for you to fell him with the right or standard mode of “Fell Tree with Root”.

You can fell an opponent if his left leg is in front. The opponent still attacks with his right leg in front, so the Shaolin exponent fells him using “Felling Tree with Roots”. In the second attack, the opponent uses his left leg in front. The exponent fells him using “Lead Horse Back to Stable” The crucial point is that if you use the standard (right) mode, when the opponent's front leg is right, fell him with “Fell Tree with Root”; if it is left, fell him with “Lead Horse Back to Stable”.

To help students remember which technique is preferable, the following mnemonic is useful: “Fell Tree when Right, Lead Horse when Left”. You may remember the mnemonic as follows: “When the tree is right, fell it. When the horse is left in the open, lead it back to its stable.” This video clip shows “Fell Tree when Right”. To fell an opponent with his right leg in front, you place your right leg behind his right leg, and fell him with “Fell Tree with Roots”.

If Opponent's Front Leg is Not Right

If you find the left-right adjustment confusing, you can use “Fell Tree with Roots” irrespective of whether your opponent has his right leg or his left leg in front, but you have to move a big step towards his back if his front leg is not his right leg. You fell him when your right leg is behind his right leg.

Felling Opponent Whose Left Leg is in Front

The exponent demonstrates from a different angle how to fell an opponent when his left leg is in front using “Fell Tree with Roots”. He has to move a big step towards the opponent's back leg. It is important to cover your opponent well so that you are safe when felling him.

Felling an Opponent as He Attacks with Undercuts from Wong Kiew Kit on Vimeo.