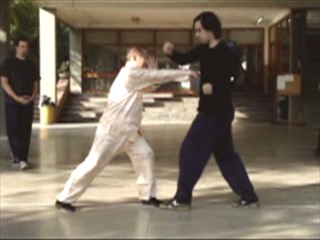 When you have been systematically trained, you can correctly and spontaneously respond to unexpected attacks

In real fighting a Boxer does not throw only one jab and freeze for you to counter. His typical tactic is to throw two feint left jabs followed by a powerful right punch, in what is called “1-2-3” or “left-left-right”. Or he may throw many left jabs to pave the way for his right punches.

This video series shows these and other methods to counter the attacks of a Boxer, including how to respond correctly and spontaneously to his unexpected attacks.

Here is the tactic of “cover and strike” against a Boxer's left jab. But the Boxer unexpectedly throws a right jab too. It doesn't matter, you brush away the unexpected right attack, and continue with your planned right strike. When you are systematically trained, you would be able to brush away unexpected attacks reflexively.

The Boxer, posed by Donowan, throws a left jab. You “float” the opponent's left-hand attack with your left hand and counter-strike with your right hand. The floating technique makes it difficult for the opponent to throw his right jab.

Details of the Floating Technique

Here are the details involved in the floating technique. First you cover the opponent's left hand. When you sense that he intends to withdraw his left hand to escape so that he can turn his body to throw you a right jab, or to swing down his left head on your head, or any other responses, you immediately float his arm at his elbow. Of course you need to be skillful to be able to apply this floating technique reflexively.

If you can control an opponent with your first covering move, there is no need to float his hand. You follow up with a “Black Tiger Steals Heart”. Your correct response, like whether a second floating move is needed, should be spontaneous; there should not be any thinking involved. Spontaneous response comes from systematic training.