HOW TO HANDLE A WRESTLING EXPONENT 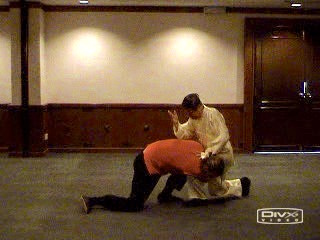 As a Wrestler attempts to shoot, Grandmaster Wong sinks onto the ground and immobilizes him using the Shaolin pattern "Fierce Tiger Crouches on Ground"

What many people may not realize is that Wrestling is a sport, and not a fighting art. As a sport, it is necessarily governed by safety rules, whereas there are no rules in a real fighting art. This does not mean that a Wrestler is not a formidable fighter. A Wrestler, especially a professional one, can be powerful and deadly, and may kill an opponent easily.

But one must remember that, especially if you are an amateur, using Wrestling for real fighting without any safety rules can be very dangerous. Indeed, rushing in head-on without adequate protection attempting to throw an opponent using a Wrestling technique known as “the shoot” is suicidal.

There were some heated debates in the past in our Shaolin Wahnam Discussion Forum on whether kungfu exponents could stop “the shoot” of a Wrestler. Some of our instructors, like Sifu Anthony Korahais and Sifu Jamie Robson, believed that a powerful strike by an internal master on the head or eyes of the Wrestler as he charges in, could cause him serious or even fatal injury. But some Wrestling supporters agued that the Wrestler would be tough enough to take the strike. As usual, we leave others to their opinions, but we in Shaolin Wahnam would certainly not take the risk.

There were also some who argued that the Wrestler would be too fast for a kungfu exponent to strike him. These Wrestling supporters made a serious mistake in combat philosophy -- they presumed that their opponents were incompetent. In kungfu philosophy we hold the reverse attitude — we always assume that our opponents are capable, therefore we must always take precaution.

Moreover, the Wrestling supporters did not realize that if a Wrestler was skillful enough to avoid the counter-attacks of an opponent and successfully grasped the opponent's legs, the Wrestler could have defeated the opponent by striking the latter's groins, dan tian or other vital spots without having to fell the opponent onto the ground first, and then to subdue him. In other words, it was a question of skills and not of tactics and techniques.

On the other hand, not many people know that there are many Shaolin techniques to counter Wrestling attacks before, during or even after the attacking process. Sifu Kai Uwe Jettkandt of Shaolin Wahnam Germany, who is also a grappling master, demonstrates some of these techniques here. 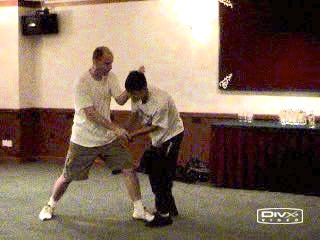 Preventing a Wrestling from Attacking

Andy employs Shaolin techniques to prevent a Wrestler from attacking. 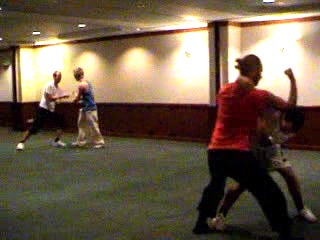 James attempts to work out ways to prevent a Wrestler grappling him. Eventually he manages to elbow the Wrestler's head. 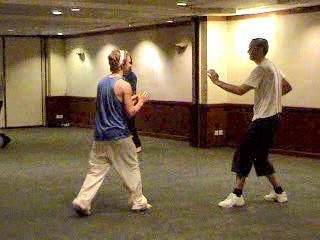 Keeping a Wrestler at Bay

Roeland manages to keep a Wrestler at bay, but another Wrestler shoots Eugene onto the ground. 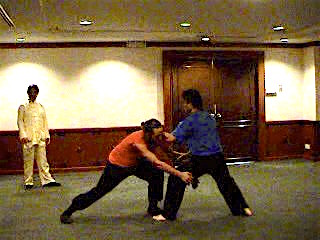 The Importance of Stances in Handling a Wrestler

Sifu Ronan shows some effective ways to counter a Wrestler's shoot. The superiority of Sifu Ronan's methods over the earlier methods by other course participants is that Sifu Ronan stays at his stances effectively. 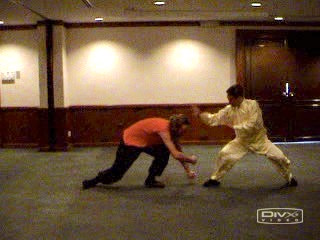 Retreating a Step to Avoid the Wrestler's Momentum

If a Wrestler charges in too closely, the kungfu exponent should retreat a step to avoid the Wrestler's momentum, and simultaneously strikes the opponent's head.

Squat Down if Wrestler Has Grasped your Legs

If you cannot move a step back because a Wrestler has successfully grasped your legs, then squat down immediately. This will prevent the Wrestler from felling you. 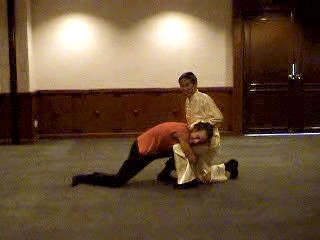 By squatting down, you lock the Wrestler's hands and also immobilize him. You can then defeat him with a decisive strike. 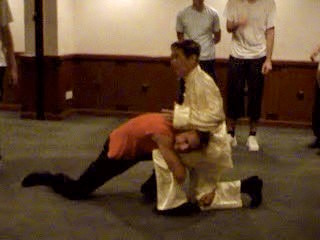 Preventing a Wrestler from Pushing you Over

A strong Wrestler can still fell you over by pushing forward. To counter him, you also push forward with your body. When a Wrestler pushes forward, his neck could be choked. 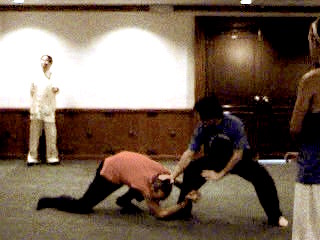 As a Wrestler shoots forward, you can retreat a step and simultaneously strike his head. Or you may squat down and strike his back. 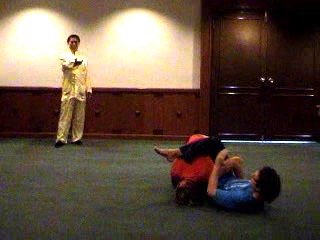 If a Wrestler has succeeded in felling you, you could grip the Wrestler's body with your legs, and then strike him. 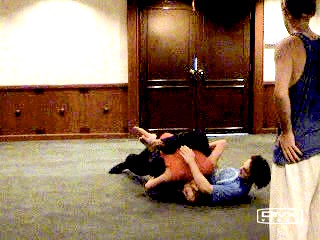 Sifu Ronan repeats the Shaolin counter against a Wrestler's shoot. This Shaolin pattern is called “Lazy Bear Looks at Sun”. 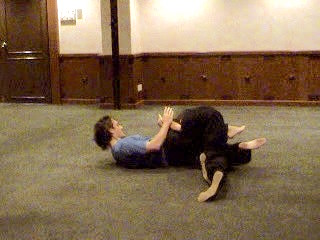 Turning the Body to Grip an Opponent

Sifu Ronan explains that to execute the technique correctly, he should follow the Wrestler's momentum and turn his body while falling so that his legs are free to grip the opponent. 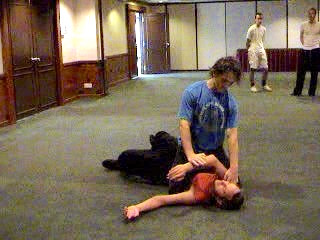 Even when you have been pinned to the ground by a Wrestler, you can skillfully turn your body and pin him down instead. This pattern is called “Crap Turns Body”. 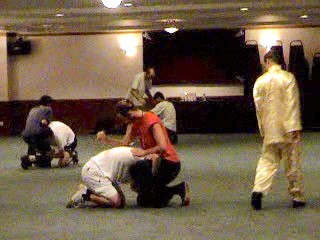 Course participants practice locking Wrestlers on the ground as they attempt their shoots. This Shaolin pattern is called “Fierce Tiger Crouches on Ground”. 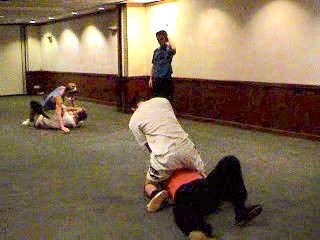 Turning the Table Around

Course participants practice the technique of turning the table around and pinning opponents instead.

How to Use Shaolin Kungfu to Handle a Wrestling Exponent from Wong Kiew Kit on Vimeo.