EFFECTIVE TACTICS AND TECHNIQUES AGAINST BOXERS 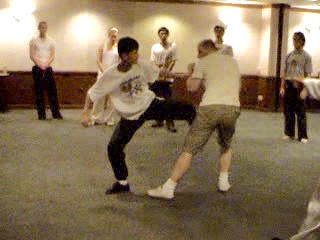 An effective tactic against Boxers is to use kicks against them

What tactics and techniques you would use against Boxers? Tactics refer to application of general principles that are effective, like using “long against short” and using stances and body-movements to compensate for speed. These principles minimize the strength of Boxers and exploit their weakness.

Techniques refer to using specific kungfu patterns to implement these tactics, like using “Fierce Tiger Speeds Through Valley” to effect a long strike compared to a Boxer's short jabs, and sinking a Bow-Arrow Stance backward without moving the feet to avoid the speedy attacks of a Boxer.

For convenience of understanding and practice, the points discussed in the video clips may be classified into “gross” and “fine”. Beginning students, naturally, pay attention only to the gross points, leaving aside the fine points for future development. Advanced practitioners take note of how these fine points may make a big difference in combat. An example of a gross point is jumping in to kick a Boxer as he retreats, and an example of a fine point is the angle of holding a Boxer's elbow as you attack him.

A lot of video clips are available for this aspect of our kungfu training against Boxers, and they are presented in various installments. This series is the first installment. 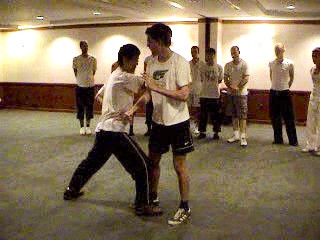 Are the following Techniques Good or Bad? 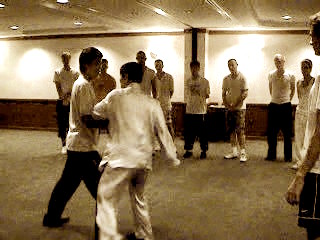 The main reason why the techniques are bad is because they can work only if the opponent freezes in his action to allow the attacker carry on his planned movements. This often happens in demonstrations, and which we must avoid in our combat training. We must always assume that the opponent is capable, and he may counter-attack. 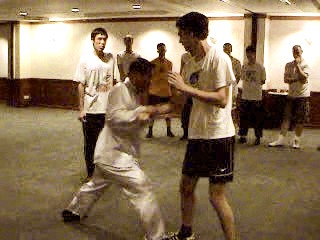 The Essential Element of Threat

Another weakness in Wei Joo's demonstration is that he lacks the element of threat. Grandmaster Wong shows the difference between attacking an opponent first without the element of threat, and then with threat. Yet, the example is not good because it exposes the kungfu exponent to counter-attacks by the Boxer. 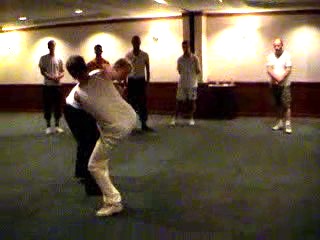 Max demonstrates using a whirlwind kick against a Boxer. Some critics may say that Max's kick does not hurt. That exactly is what we want to do. We do not want to hurt our sparring partners during practice. But it would be different in a real fight. Grandmaster Wong asks the participants to decide whether the techniques demonstrated against a Boxer are good or bad? What is your opinion? 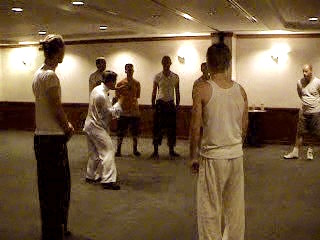 Giving your Opponent No Time to Counter

Max's techniques are good. Superficially, Max's tactic is similar to Wei Joo's attack, in that they press their opponents with a series of attacks. But why is it that Wei Joo's pressing attacks are bad whereas Max's are good? The reason is that by covering his opponent, Max gives him no time and opportunity to counter-attack. Notice that Max achieves this by using good footwork. 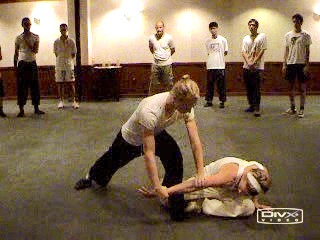 Subduing a Boxer with Chin-Na

James demonstrates how to use pressing attacks on a Boxer and then subdues him with a chin-na technique. Notice that we do not hurt our sparring partner in practice. The participants agree that the kungfu techniques are good and give their reasons for their choice. 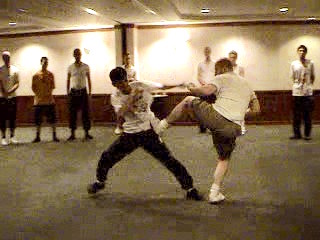 Excellent Tactic and Technique against Boxers

Andy demonstrates an excellent tactic against Boxers, i.e. pressing attacks using kicks. The technique used here is “Happy Bird Hops up Branch”. Andy exploits two main weaknesses of Boxers. Their hand attacks are shorter than kicks, and they have no techniques in their Boxing repertoire to counter kicks. He also avoid the Boxer's strength, i.e. speedy strikes. Andy's application of the technique and tactic is so effective that the Boxer has no chance to counter. 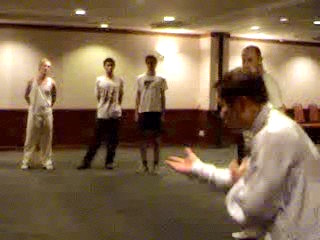 One main weakness of a Boxer is his limited range of techniques. Hence, if he covers his middle body with his hands, the kungfu exponent could move in to chop the Boxer's exposed upper body. If the Boxer retreats, the kungfu exponents could jump in with a side kick. The jumping in, which can be made in one movement, would be faster than the Boxer's bouncing back, which many need two or three movements. 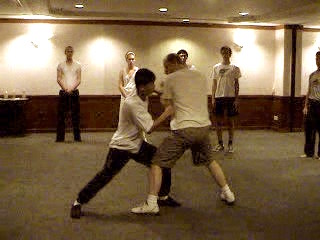 Triple Attack against a Boxer 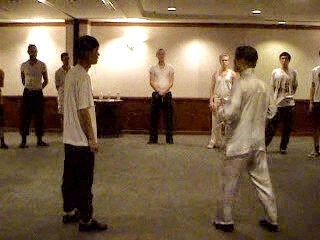 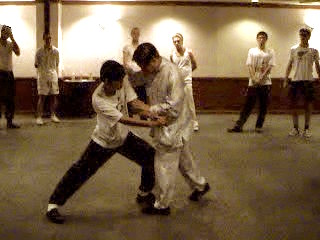 Guard against a Reversal of Situation by a Skillful Boxer

Nevertheless, we must always remember that an experienced and skillful Boxer can neutralize your good tactics and techniques. By a skillful twist of his body, which an experienced Boxer will know, he can reverse the combat situation. But if we are prepared, we can again turn the table against him.

Realizing and Minimizing our Own Weaknesses

As combat is fluid and not static, a skillful Boxer (like a skillful kungfu exponent) can turn a disadvantageous situation to an advantageous one. We must, therefore, firstly realize this development, which actually happens all the time in high-level combat. Secondly, we minimize this possibility that a skillful exponent may use. Thirdly, we must know how to respond effectively if the opponent exploits the possibility. 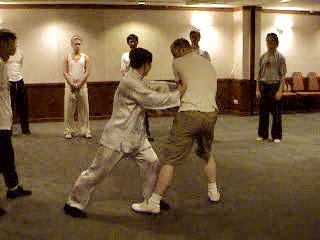 Here is how to minimize the opportunity an opponent may exploit to counter-attack. We can do so if we understand the underlying principles and have practiced the appropriate responses. 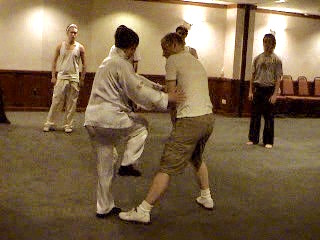 Exploit our Advantage to Defeat an Opponent

On the other hand, when we have an advantage we must exploit it to defeat an opponent. First, we must be aware of the advantage. Then, we must be trained to exploit it. In today's free sparring, many martial artists often give away advantages to their opponents, in what we call “free offers”.

Effective Shaolin Tactics and Techniques against Boxers from Wong Kiew Kit on Vimeo.