HOW TO HANDLE A TAEKWONDO EXPONENT 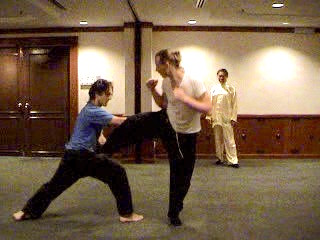 Sifu Ronan catches the leg of a Taekwondo exponent as he kicks, and dislocates his ankle

Again, this does not mean that Taekwondo exponents are not formidable, or that a kungfu exponent will necessarily beat a Taekwondo opponent. Indeed, in today's situation the reverse is often the case. Kungfu practitioners of many years are usually beaten by Taekwondo practitioners in free sparring, mainly because the kungfu practitioners have never or seldom learnt sparring systematically.

Grandmaster Wong revealed that of the different types of martial artists he sparred with in his young days, sparring against Taekwondo exponents was the easiest. He shared with the course participants many of the tactics and techniques he found effective.

A very important point Grandmaster Wong advised is that in sparring you must go into, and not retreat from, a Taekwondo exponent. Of course you need to enter at the right time, and you must protect yourself as you enter. An excellent moment to enter is when the Taekwondo exponent has completed his kicking attack, but has not recovered from his attacking momentum.

The video clips below show Sifu Ronan demonstrating some effective ways in countering a Taekwondo opponent, posed by Peter. All the movements are spontaneous and not pre-arranged. 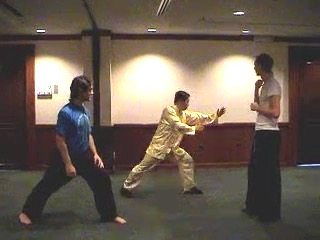 Adopting a suitable stance is a first step in preparing yourself for combat. Earlier Sifu Ronan used a False-Leg Stance when sparring against a Karate exponent. Now he uses a Bow-Arrow Stance as this gives him more room for maneuver when an opponent kicks.

Catching an opponent's foot as he kicks and dislocating his ankle is an effective counter. Taekwondo practitioners have no defence in their art against this attack because catching one's leg is not allowed in Taekwondo. 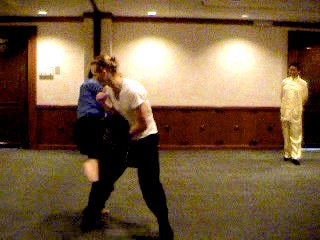 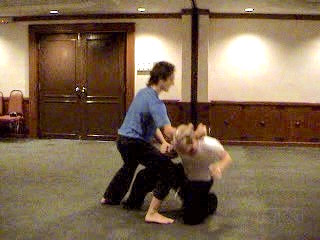 Force a Taekwondo Opponent onto the Ground

The exchanges here are quite similar to those in the previous video clip. But here Sifu Ronan forces a Taekwondo opponent onto the ground. 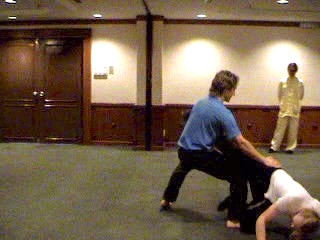 Entering to Counter a Round-House Kick

Many people are at a loss when attacked by round-house kicks, which look threatening and which Taekwondo exponents use quite often. It is actually quite easy to counter round-house kicks. Sifu Ronan demonstrates an excellent example. By moving in, he neutralizes the attacking force of the round-house kick. 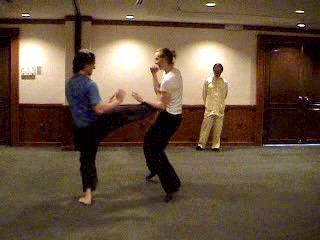 The reverse round-house is also often used in Taekwondo. This is an unwise technique, as it is technically slow and leaves the exponent exposed to counter-attacks. 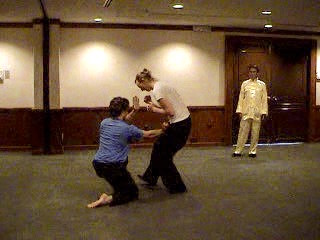 Exploiting the Weakness of the Reverse Round-House

Here are two more counters against the reverse round-house kick. None of the movements are pre-arranged. 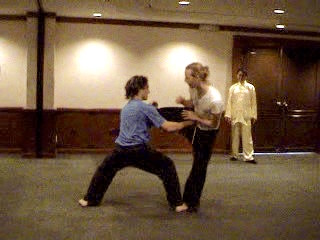 Allowing the Attack to Complete or Intercepting it

Sifu Ronan demonstrates two different kinds of counter-attack. In the first, he allows an opponent to complete his moves, then moves in to counter before the opponent has recovered himself. In the second, Sifu Ronan intercepts the opponent's initial moves. 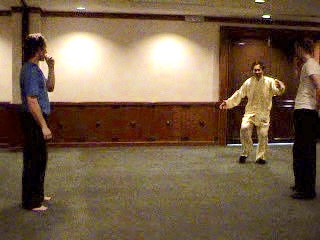 Counter when an Attack is just Spent

Here is a very effective tactic against Taekwondo opponents. Don't retreat when they kick, but use body-movement to avoid the attacks. When the attacks are just spent and before the opponents can recover, move in to counter-attack.

How to Use Shaolin Kungfu to Handle a Taekwondo Exponent from Wong Kiew Kit on Vimeo.