HOW TO HANDLE A KARATE EXPONENT 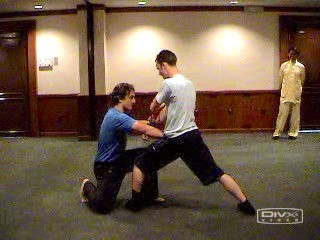 Defeat an opponent as soon as he moves

From the perspective of tactics and techniques, handling a Karate exponent is comparatively easy — easier than handling a Boxer or a Kick-Boxer, for example. This statement should not be taken as an insult to Karate, or belittling it, though unfortunately it is often the case. This is our dilemma of being truthful.

But we must realize that the above statement does not mean a Karate exponent is not formidable, nor a kungfu exponent will necessary beat a Karate exponent. In fact, the situation today is that most kungfu practitioners, including those who have been teaching for many years, will be beaten by Karate blackbelts. The main reason for this fact is of course not due to the superiority or inferiority of Karate techniques, but due to most kungfu practitioners not having been trained in combat application.

My following experience, which I still remember clearly, may be illuminating. Years ago, even before I learned from Sifu Ho Fatt Nam, I had my first free sparring with a Karate exponent. At that time my combat skills were far below those of an average Shaolin Wahnam kungfu student today. Yet, the Karate exponent was very impressed with my techniques, which to me were the most basic.

The Karate exponent stopped immediately and asked whether I practiced kungfu. He did not know earlier what I practiced. We were talking about martial art, and he wanted to impress me with his Karate. But he did not want to continue with the sparring. He conceded that kungfu techniques were too sophisticated for him. Instead, he told me and a few other friends who were also around what happened at his training session the day before.

A student wanted to know what to do if someone grasped him from behind with both arms. The group tried out the technique for some time. No one knew a counter, not even the instructor. Then accidentally someone slipped his hand behind and griped the attacker's groin, causing him pain and therefore to release his grasp. Someone from the crowd exclaimed that the pattern was called “Bail Fish from Sea Bottom”, and all concluded that only a kungfu exponent could make such an effective counter.

We did not spend much time at the Intensive Shaolin Kungfu Course of October 2006 to practice special Shaolin techniques against Karate because the 16 basic combat sequences learn in the course already serve the purpose excellently. Nevertheless, Sifu Ronan demonstrated what he would do if a Karate exponent attacked him. All the attacking and counter moves were impromptu and not pre-arranged. 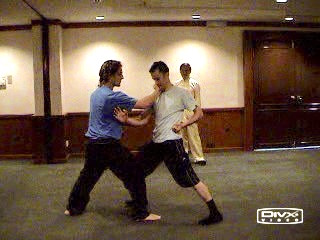 The Karate exponent, posed by Padraig, initiates with a frontal kick. Notice that Sifu Ronan counters with three strikes. The two are obvious, but do you know the third? 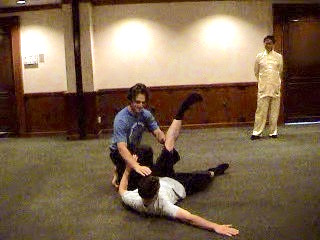 As the Karate exponent attempts to attack, Sifu Ronan intercepts, fells him onto the ground, and completes with a decisive strke.

Defeat an Opponent as Soon as he Moves

As the Karate exponent attacks, Sifu Ronan closes his attack and simultaneously strikes his groin. It defeats an opponent when he just completes his initial move! 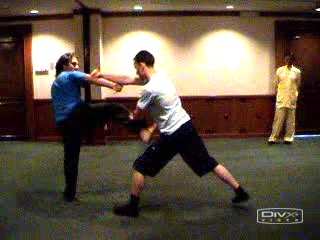 As an opponent attacks, Sifu Ronan leans back and executes a side kick, followed with a hanging fist at the oppoent's head. This also defeats an opponent when he just completes his initial move. 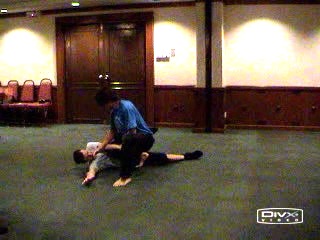 Sifu Ronan initially wants to grip an opponent's throat, but as he pushes in, Sifu Ronan fells him onto the ground, then grips his throat. 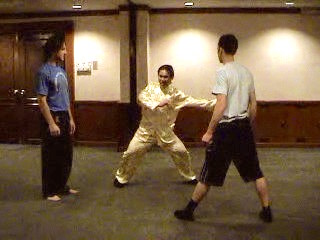 Superiority of Kungfu over Karate

A kungfu exponent might neutralize the felling technique and counter-attack. The other combatant would then continue accordingly. This, in fact, was how kungfu techniques developed.

How to Use Shaolin Kungfu to Handle a Karate Exponent from Wong Kiew Kit on Vimeo.