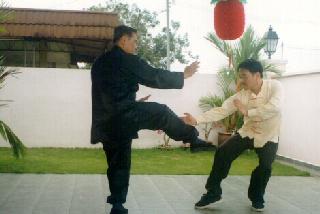 Using the Tactic of Feign-Real Attack

In the previous sequence your opponent (or partner) intercepted your pressing tactic after your third attack, using “Beauty Looks at Mirror”. He could also intercept you at your second attack.

But you don't allow this to happen. You too break his pressing attacks at his initial move, by first threading away his “Fierce Tiger” with “Golden Dragon Plays with Water”, followed instantly with a second “threading hand” to attack his eyes.

The second “threading hand” is a “shadow hand” or feint move. Your real attack is the organ-seeking kick below applying the pattern “Yellow Bird Plays with Water”. However the feint move above could be a real attack if your opponent fails to neutralize it. This is the tactic of “feint-real attack”.

A double-attack to the eyes and the groin almost at the same time is certainly formidable. If your opponent attempts to ward off your strike to his eyes, you kick at his groin. If he attempts to ward off kick, you strike his eyes. If he tries to ward off your right hand strike with one hand, and your organ-seeking kick with his other hand, you can jab into his throat with your left palm thrust. You are using three “stars” or attacking points against his two hand defences.

So, what can he do? Simple, if he knows how. He retreats his front right leg into a right False Leg Stance and simultaneously strikes your right kicking leg with his right palm. Employing the pattern “Trim Bamboo together with Branches”. This is an excellent counter, changing an unfavorable situation into a favorable one. With just one move, he neutralizes your double attacks and simultaneously fractures your leg at a time when you think you could kick him.

Quickly you pull back your leg, “tame” or cover his right hand, and execute a leopard punch at his throat or temple, employing the pattern “Angry Leopard Charges at Fire”. He moves s small step backward and “floats” your attack with “Golden Dragon Plays with Water”.