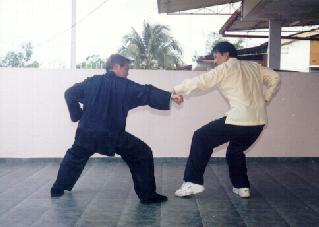 The third fundamental skill is appropriate force, which is developed in our force training programme like “Golden Bridge” and “One-Finger Shooting Zen”, and which we apply in our combat sequences. It is important that the force must be flowing, and not mechanical or staccato.

Without these three fundamental skills, a person cannot be combat efficient, even if he knows a lot of techniques. This is a common fault with many kungfu students -- they think mistakenly that they can be more combat efficient by learning more techniques.

Skills have to be developed methodically, not merely learnt from a book or even from a master. A master provides you the method, and shows you how to do it, but you have to practice and practice to so that the skills become second-nature to you.

Free sparring is not a method to develop skills; it is a method to test whether you have developed the necessary skills to apply appropriate techniques in combat. This is a common fault with most martial art students today -- they mistakenly think they can be combat efficient by practicing free sparring.

In this combat sequence, “Precious Duck Swims through Lotus”, you consolidate and improve upon the combat skills you have learnt, namely right timing, right spacing, right judgment and instantaneous change. We also have increased the choice of attack and defence from two to three alternatives.

In the first combat sequence, there is only one choice, which is actually no choice. The initiator attacks with “Black Tiger Steals Heart” and the responder defends with “Single Tiger Emerges from Cave”. Both the initiator and the responder know what the movements will be. The movements are pre-arranged so that being free from worrying what to move next, they can better focus on developing the skills of right timing, right spacing and appropriate force.

Two new skills are introduced in this sequence. One is adjusting footwork. This skill is a development of right spacing. After defending your partner's “White Snake” with your “Golden Dragon”, you have to bring back your front left leg a small step before moving forward a big step with your right leg for your counter-attack with “Precious Duck Swims through Lotus". If you do not adjust your footwork, you would give your opponent a free advantage, i.e. an advantage he gains without having to do anything. You would have made it easy for him to strike you or fell you to the ground.

The second skill is covering yourself in your attack. You can do this by “taming” his front left hand, i.e. pushing it aside or “floating” it upward, with your left palm maintaining contact with his left arm, while you strike his side ribs with your right punch. Covering yourself is extremely important in any attack. This is what many other martial artists never do, exposing themselves to serious counter-strikes.

In the previous two combat sequences, the counter-attack mode is “first defend then counter”. Here the mode is “no defend direct counter”. As an opponent attacks you with “Precious Duck”, you need not block or ward off the attack first, then counter-attack. While moving your front left leg backward into a left false-leg stance, you directly strike his attacking arm with your hand-sweep.

“No defend” is a misnomer. It is not ignoring your own safety and go all out to attack, which would be foolish. Here, the defence is already incorporated in your counter-attack. As you move into your false leg stance for your counter-attack, you already have moved your body away from his attack.