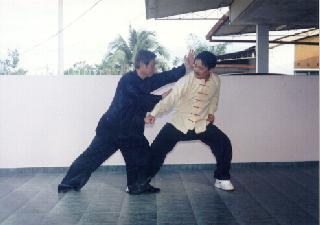 Here is a quick review of what you have learnt. Combat Sequences 1 to 4 are meant to train fundamental combat skills like right timing, right spacing, flowing movements, safe coverage, foot adjustment, and instantaneous changes. The four fundamental hand attacks to the top, middle, bottom and sides, and their corresponding defences are used. The stances used are mainly in the left mode. These four sequences constitute the kungfu set “Black Tiger Steals Heart”.

Sequences 5 to 8, which constitutes the kungfu set “Fierce Tiger Speeds Through Valley” introduce the right leg mode as well as many hand techniques for attack and defence. Sequence 5 introduces the tactic of pressing attacks, where a skilful exponent may press an opponent against a wall almost irrespective of the latter's defensive moves! Sequence 6 introduce the left palm strike, applying internal force. It also illustrates the progression from 3 movements to only I movement in apply the pattern “Dark Dragon Draws Water”.

Needless to say, all techniques, skills, tactics, principles and so on are trained progressively, not exclusively. In other words, although fundamental skills like right timing and right spacing are emphasized in Sequences 1 to 4, these skills are constantly improved in all other sequences. Although tactics like pressing attacks and “alert the east, attack the west” in Sequences 5 and 6, they can be used in any other sequences.

In this situation and if all other things were equal, “Bar the Big Boss” has a technical advantage over “Single Tiger Emerges from Cave”. In applying the “Single Tiger” you have to bring back your front right leg from the right Bow-Arrow Stance to change into the right False Leg Stance, and bring back your right hand from “Fierce Tiger Speeds through Valley” in a big arc to change into the “Single Tiger”. But in applying “Bar the Big Boss”, you merely need to shift from a Bow-Arrow Stance to a sideway Horse-Riding Stance, and change your horizontal arm to a vertical arm position, which is technically faster.

In the previous sequence, we learned the progression from 3 moves to just 1 move when applying “Dark Dragon Draws Water”, hence increasing our speed but without actually trying to be faster! This sequence also provides us with a good opportunity to learn and develop this skill of minimizing movements, as follows.

When you have become skilful in applying “Bar the Big Boss” followed by “White Snake Shoots Venom” as two separate patterns (with a short pause between the patterns), you can perform the two patterns continuously as if they were one pattern (i.e. without any pause between them). Gradually you will discover from your own experience that instead of first applying a vertical block as in “Bar the Big Boss”, then followed with a taming hand as part of “White Snake”, you can achieve the same effect by using a smooth curve of your right hand in one movement instead of two.

Then you will also discover that you do not even need to change from Bow-Arrow Stance to sideway Horse-Riding Stance. All you need to do is to swerve your body in a smooth curve as you apply “White Snake Shoots Venom”, even without the need to apply “Bar the Big Boss”. In other words, from the previous “Fierce Tiger Speeds through Valley”, you can proceed straight to “White Snake Shoots Venom”, thus reducing three patterns to two.

If you execute this “White Snake” well, not only you can be very fast — striking the opponent's throat almost the same time he thinks he can hit you with his thrust punch — but you will also have “tamed” his hands in such a way that, apparently, he could not defence against your counter-attack. Yet, by withdrawing his front left leg a small step back into a front False Leg Stance, he could free his hands to counter your palm thrust with a “Golden Dragon”. This should reminds us that in real life, even when the situation appears hopeless, by taking a step back, one can often find a viable solution.

Your opponent counterattacks with a low punch. He must adjust his foot position before moving in with a low sideway Horse-Riding Stance, otherwise without you having to do anything he offers you a free advantage that you can exploit. You response to his low attack with a hand-sweep, breaking or dislocating his elbow or wrist.

As he moves his arm away to avoid your hand-sweep, you move in with a palm chop using the pattern “Chop the Hua Mountain”. Remember to cover yourself as you move in, otherwise he may jab his right palm into your ribs or abdomen.

This “Double Bows” counter-attack provides an excellent opportunity for you to practice and develop your flexibility. To defend against this counter-attack, you move your front right leg backward from the right Bow-Arrow Stance to a right False Leg Stance, and simultaneously deflect his strike with a right tiger-claw. This movement demands much skill because you have to shift back your forward moving leg immediately it touches the ground in its forward movement.

This skill, which is essential for sound defence, has been introduced right at the start of the combat sequences. It involves the left leg mode in Sequences 1 to 4 (from “Black Tiger” to left “Single Tiger”), and the right leg mode in Sequences 5 and 6 (from “Fierce Tiger” to right “Single Tiger”). Speed was not as urgent in these combat situations because the opponent used the tactic of “first defence then counter”. Here the opponent not only uses “no defence direct counter”, but also his counter comes at a time when your attack has not even been completed. If you are trained to defend against this counter-attack well, defence in other situations will be relatively easier.

All these wonderful techniques and tactics are possible if our stances are both solid and flexible, showing how important stances are in combat even at this level, which is actually at the beginning stage of our kungfu training programme. In other words, those who prefer to bounce about, mistakenly thinking that stances are ineffective in fighting, have not been exposed to even the basics of kungfu philosophy and practice.