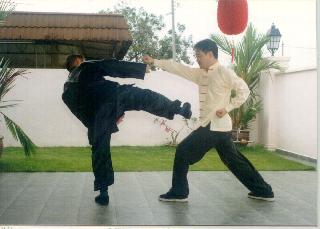 How to Open the Way for Kicks

Having trained Combat Sequences 1 to 8 well, you should be competent to handle any striking attacks. The following four combat sequences, Sequences 9 to 12, provide you with fundamental kicking attacks and their defences.

As in strikes, kicks may come from anywhere but may be generalized into four main directions, namely:

If all things were equal, it is disadvantageous to execute kicking attacks. The following are some important reasons.

Hence, before you use kicks, you must fulfill the following conditions.

In this sequence, Sequence 9, you as the initiator employ pressing attacks to open the way, starting with “Black Tiger” and pressing in with “Fierce Tiger”. Then you purposely pause, leaving your left guard hand down to give a false exposure to tempt him to attack. Your opponent attacks with a right “Black Tiger Steals Heart”, which is a representative attacking pattern. In fact he may attack in almost any pattern and you can respond as follows.

As his attack approaches, slant your body backward and simultaneously execute a middle side kick with the pattern “Happy Bird Hops up Branch”. Unless he is well trained, he is likely to be hit.

You will notice that you are using the tactic of “no defence direct counter”. There is no need for any defence against his punch, because by slanting your body backward, you have moved yourself from his reach, but at the same time adjusting your body position or the middle side-kick.

If the space between you and your opponent is too wide for your right kick to reach, you would have to move your front right leg a small step backward, turn your body and execute a left side kick, using the same pattern “Happy Bird Hops up Branch” but with your left leg.

Your opponent retreat his front leg into a sideway Bow-Arrow Stance and strike your kicking leg with “Lohan Strikes Drum”. As you pull back your attacking leg, he follows up with a reversed palm thrust to your throat or ribs using the pattern “Dark Dragon Enters a Well”. You respond with “Golden Dragon Plays with Water”.

In this practice, your opponent (or partner) falls into your trap and counter-attacks with a “Black Tiger” as you pause at “Fierce Tiger” leaving your body exposed. But what should you do if he hesitates or does not attack you. In this case, you move forward with a left thrust kick or a left side kick.