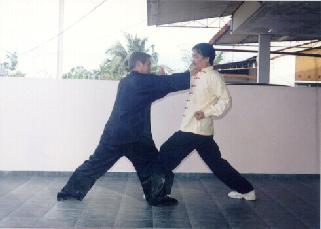 Attacks can come in countless ways, but to facilitate learning, masters have group them into four major categories, namely:

Numerous fundamental skills have been developed, and they include:

Numerous tactics are also introduced, and they include:

In order that you can develop the skills to using typical kungfu techniques spontaneously in combat, these combat sequences are practiced in progressive stages, as follows:

The opening attack “Fierce Tiger Speeds through Valley” in this sequence, as in the other sequences, is used as a feint move to tempt the opponent to counter-attack. That is why the left guard hand, which is normally held near the right shoulder in this pattern, is purposely left exposed.

As the opponent falls into our trap and counter-attacks, we can response in numerous prepared ways, such as executing another “Fierce Tiger” in Sequence 5, “Dark Dragon” in Sequence 6, and “White Snake” in Sequence 7. In this sequence, we use “Single Knife” to fracture his attacking arm or dislocate his attacking elbow, followed immediately with “Horizontally Sweep a Thousand Armies” at his neck. Hence, if you are well trained, like having practiced selected techniques at least 50 times daily for a few months, you may defeat your opponent the moment he responses to your feint moves.

But if you opponent is well trained too, he can of course neutralize your rehearsed attacks. In this sequence, for example, he intercepts your “Horizontal Sweep” with a “Single Knife”, and irrespectively of whether you could shift your arm away in time, he follows immediately with a “Golden Leopard Speeds through Jungle” into your ribs.

As you strike his attacking arm with “False Leg Hand Sweep”, he “flows” over your attacking hand and swings a “Reverse Hanging of Lotus” on your right temple, guarding your right leg with his right leg. You may neutralize his “Hanging Lotus” with “Golden Dragon”. At this point, both you and your opponent have a good opportunity to continue combat. You may, for example, move forward with a “Black Tiger” or a “White Snake”, thus continuing with any of the Sequences 1 to 4. Later, when you have learned kicking techniques, you may continue with a right thrust kick or a left side kick.