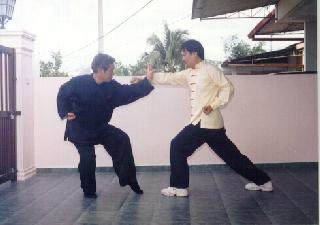 Most martial art students today make a big mistake in their combat training. They think mistakenly that practicing free sparring is the way, often the only way, to combat efficiency. To a large extent this came about because many people were disillusioned with kungfu, as much of (so-called) kungfu practiced today is merely performing external forms with little or no combat training.

In genuine traditional kungfu, free sparing is never used to train combat efficiency; it is used to test combat efficiency, to confirm that the students can really fight. In other words, it is not a training tool — it is a testing tool. You engage in free sparing only after you know how to fight, not as a means to train you to fight.

Before you even make any move, you must observe the “four modes of preparation” — one, you must be mentally and physically ready; two, you access your opponent; three, you seek an advantage or an opening; and four, when the opportunity arrives you move swiftly.

When you move in to attack, you must “ask the way”, i.e. you access your opponent's strength and weakness, and you open the way for attack as well as prevent him from suddenly counter-attacking. You must also achieve “three arrivals”, i.e. the arrival of the heart, of the feet and of the hands.

The two fundamental skills developed here are right timing and right spacing. And the skills are applicable to both the initiator (attacker) and the responder (defender). In other words, when you move in to attack, you must move in at a right time, and space yourself at a right distance. A very common weakness is that the initiator is too far from the responder in his attack, in which case the responder can counter-strike immediately, without bothering to defend first.

On the other hand, when you defend against an attack, you must move at a right time. A very common weakness defenders make is that they move back too soon. A trained attacker would exploit such a weakness. He would skip the first attack, treating it as a feign move, and follow in with a second attack, striking the defender at a time when he is still in the process of defending the first attack.

Nevertheless, now you should not worry about this skill of exploiting the opponent's weakness. It is practised at an intermediate level. At an elementary level, your focus is to avoid making such weaknesses. If you can just do this, you would have done well. Many combatants today, including those at black-belt level, commit many such mistakes, thus throwing advantages to their opponents without their opponents having to make any effort.