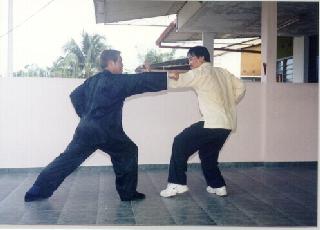 Progressing to the Right Leg Mode for Combat

Combat Sequences 1 to 4 which have been posted in previous vebpages constitiute one stage of combat training, and they form the kungfu set "Black Tiger Steals Heart" in the Shaolin Kungfu programme of our school. The main objective of this stage is to develop fundamental combat skills as follows:

The first two skills, right timing and right spacing, are the most fundamental. Without them the other skills, as well as all techniques and force, lose their significance. An exponent, for example, may have some fantastic techniques and tremendous force, but if his attack or defence cannot reach its target on time, all his techniques and force are quite useless.

All the principles you learn in combat training can be, and should be, transferred to our daily work and play to make our life more rewarding. This is a main reason why we devote our time and effort to kungfu training. The principles of right timing and right spacing are of utmost importance in life. You may be the best computer programmer in the world or have the most advanced marketing skills, but if these skills are not used at the right time and at the right place, they are as good as being useless.

Some people, who may actually have many talents or much knowledge, constantly complain that society or Mother Luck never gives them an opportunity to use their talents and knowledge. What they need is to develop the skills of right timing and right spacing like what we do in our combat training, and transfer these fundamental skills to daily life.

In the previous set of four combat sequences, besides the fundamental skills you also learned the basic techniques for hand attacks and defence. You should practise these four sequences in stages, as follows:

At the pre-choice stage, the initiator begins with a pre-chosen sequence, and the responder responds accordingly to complete the sequence. At the self-choice stage, the initiator may start with any sequence he likes, but the releasing of control must be gradual so that the responder can respond accordingly too and both partners can complete the sequence smoothly.

At the mid-point continuation stage, either one of the partner may continue with another sequence at the mid-point of the first sequence. For example, you may start with Combat Sequence 2, but at any suitable point during the sequence you or your partner may continue to Combat Sequence 3. You may enter Combat Sequence 3 at its beginning or at any suitable point of Sequence 3. Hence the exchanges are less although this stage is a progression from the previous stage. But later you may have three instead of two sequences in one encounter.

At the end-point addition stage, you or your partner may add a suitable hand-attack pattern and the other person will respond accordingly. The additional attack pattern need not be any of the patterns found in the four sequences, but it must be a hand attack. For example, instead of a level punch of the "Black Tiger", you may use a palm strike or a phoenix-fist. You are to add only one pattern, and after the respond both will return to poise patterns.

Once you have practised these four combat sequences well, you can defend against all hand attacks -- although at this level the range of techniques is limited. Hence, you will soon find that neither you nor your sparring partner can beat the other. No matter what hand attack or counter- attack one uses, the other can defend against it effectively. None has an advantage over the other because now both have the same level of skills and techniques.

This sequence, "Fierce Tiger Speeds Through Valley", introduces the right leg mode in attack. So far, from Combat Sequences 1 to 4 with the exception of the "Precious Duck" pattern, the left leg mode is used. The left leg mode and the right leg mode have their own strong points and weaknesses. Some martial artists, often without their own awareness, favour one mode to the other. Later when you are more skilfull and know more techniques, you can manoevre your opponent to his unaccomstomed leg mode, often without him knowing, thus gaining a tactical advantage.

Now this limitation can readily be overcome. For example, after defending against your partner's Black Tiger or Green Dragon with your right Single Tiger in Sequences 3 or 4, you can "thread" with your left Golden Dragon and continue with your right Fierce Tiger as in Sequence 5. You will find a lot of attack patterns in the right leg mode in subsequent sequences.