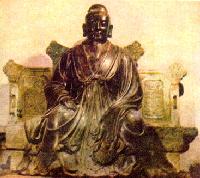 Sifu, thank you for giving me the opportunity to write about the two great arts. I have in fact been thinking a lot about which art to practice, and some of the contents here were originally my own notes which were meant to be posted on the forum. As I do not have any personal experience of Shaolin Kungfu, I beg Sifu's indulgence if any of my comments are out of line.

I would like to begin with why I think Shaolinquan is superior to Taijiquan in the larger scheme of things. I will then set out objectively what I think are defining characteristics of both arts, followed by my personal views and research I have done. The third section will cover my personal assessment. Finally, I would like to ask Sifu some questions on some differences I have been thinking about. Sifu, I will be using hanyu pinyin as this system comes most naturally to me]

I have no doubt that Shaolinquan is the greatest marital art in the world. I say this as a current Taijiquan practitioner, and because I truly believe it and not only because I am writing to you, Sifu. I have read Sifu's own words on this in “The Complete Book of Shaolin” as well as on the webpage and I concur fully.

My own reasons for this view stem partially from the fact that Shaolinquan is the father of Taijiuqan. While Zhang Sanfeng created Taijiquan as an improvement over the Shaolinquan he learnt (a point I will explore further below), Shaolinquan is so vast in its scope that Zhang Sanfeng could not have taken the essence and the best from the whole corpus to create his own art.

Congratulations for your sharp observation. Not many people, including some masters, may have observed this fact.

Just in case some people may wrongly think you are being disrespectful to Zhang Sanfeng, which is certainly not true, I would like to add that as Shaolinquan is so vast, no one, not even the greatest of masters like Zhang Sanfeng, could have learnt and then taken the essence from the whole Shaolinquan corpus.

As you have said, the art Zhang Sanfeng evolved was certainly better and more profound than the one he had learnt. I believe that Zhang Sanfeng himself did not give different names to the art before and the art after his evolution. He just called them, or it as to him they were the same art, “Shaolinquan”.

Instead of practicing martial art forms (gongfu), energy exercises (qigong) and meditation (chan) separately, Zhang Sanfeng integrated all these three aspects into one unity. This was a tremendous contribution to the whole of kungfu history, for which he is rightly honored as the First Patriarch of the Internal Arts. We in Shaolin Wahnam are particularly grateful to this great master for this development.

Later on, to differentiate the distinct type of Shaolinquan practiced at the Wudang Mountain where Zhang Sanfeng evolved it from the original version at the Shaolin Temple at Henan, people called it “Wudang Shaolinquan. Over the years, this term was shortened to just Wudangquan. Much later when the great master Chen Wang Ting employed yin-yang principles from the Taiji concept to explain its principles, people called it “Taijiquan”.

I believe that he certainly created an art better than what he did learn but there were obviously gaps in his grasp of Shaolinquan and Shaolin gongfa. From what I have learnt from you so far, Sifu, it seems that a lot of what is essential in Taijiquan is already found in the Shaolinquan you teach. I speculate that if Zhang Sanfeng had mastered all of the the highest Shaolin arts, he would not have needed to create Taijiquan.

I don't think Zhang Sanfeng created Taijiquan on purpose. No one, including the greatest of masters like Zhang Sanfeng, could have mastered all of the highest Shaolin arts. In fact even by the time of the Tang Dynasty, which was many centuries before Zhang Sanfeng, Shaolinquan was so wide that some sort of specialization was necessary.

Zhang Sanfeng was a Shaolinquan master of the highest level. In fact it was believed that he was the only one in the Shaolin Temple at that time to master the”Thirty Six Techniques of Dotting Vital Points” (“Dian Xue”). Hence, without him, this art, which is now found in both Shaolin and Wudang, might have been lost.

I do not mean to be presumptuous but the future development of our Shaolin Wahnam arts may have parallels with Zhang Sanfeng's evolution of Taijiquan. Of course I am nowhere when compared with Zhang Sanfeng, but the comparison may reflect how Taijiquan evolved.

Although I did not consciously set out to create a new art, due to different needs, environments and other factors, both the methodology as well as the content of the Shaolin arts I teach now are quite different from what I learned from my masters. If our Shaolin Wahnam arts continue to develop and spread, a few centuries later people may call ours “Wahnamquan”, though personally I would prefer our arts to remain being called “Shaolinquan” and “Taijiquan”.

On an alternative but related view, in the novel “Yitian Tulong Ji” (Heaven Sword and Dragon Sabre) and popular legend, Zhang Sanfeng was said to have learnt part of an internal skill (shengong) (my guess is that this Shengong is actually Yijin Jing and Xisui Jing). In some of the Chinese books I read, it is said that Zhang Sanfeng was able to understand the Yijin Jing and Xisui Jing so well that he grasped the original essence of the skills as intended by Damo, as compared to the other Shaolin masters at the temple who had been misinterpreting the 2 arts. This was one reason why Taijiquan was so formidable — it drew from one of the highest level of Shaolin arts (there may be higher level arts not known to Zhang Sanfeng).

From the above, it is therefore my opinion that the very greatness of Taijiquan was inspired by that of Shaolinquan.

In view of your comments above, it is interesting to note that after practicing Yijin Jing, some of our students went into chi flow movements that we call “Flowing Stream Floating Clouds”. I believe that was how Zan Sanfeng first evolved the relatively hard Shaolinquan he had learnt into softer Wudangquan. 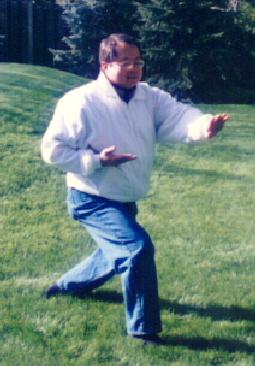 Wahnam Taijiquan, demonstrated here by Dr Kay Ie of Canada, is a result from the evolution of Sifu Wong's teaching, and draws its inspiration from Wudang Shaolinquan practiced by Zhang San Feng

The next question I asked myself was whether, having taken from the best Shaolinquan had to offer, Zhang Sanfeng had added any other elements to make his art better than the original source (“Blue surpasses green from which it came”). One thing he did do was to make Taijiquan uniquely Chinese, by including the Dao theory, Bagua Theory and the Five Processes. This brought the art to an immensely profound level such that I cannot even begin to understand the basic theory behind it.

I am not sure whether the Dao philosophy involving Bagua and Five Processes theories were added by Zhang Sanfeng. He might have, as he was a Daoist master, but the main Taijiquan philosophy was formalized by Chen Wang Ting much later.

What got me thinking was whether greater profundity is necessarily better. Shaolinquan although incredibly powerful is simple at its heart. The universe seems like an incredibly complex phenomenon, but it is driven by very basic processes. Perhaps I could explain it as such, using Emiko's imagery, that the more complex Taijiquan, is nonetheless composed of the basic building blocks from Shaolinquan.

At this point in time, from my little knowledge, I hold the view that Shaolinquan is the greater art, although I am open to other and opposite views.