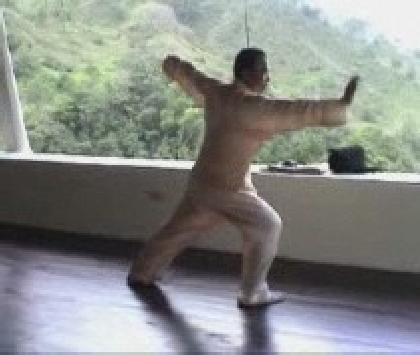 One of the jing4 that is commonly spoken of is “exploding force” or “fajing”. This is not unique to Taijiquan, since other martial arts certainly have an explosive expression of power as well. But what struck me as different in Taijiquan is the process fajing takes.

Fa-jing is not a type of jing but the process of exploding jing. In other words, the jing or internal force that you explode out in Taijiquan can be “peng force”, “lu force”, “spiral force” or “shaking force”. In Hoong Ka Kungfu, it can be “hard force”, “soft force”, “pressing force” or “straight force”.

According to the classics, “the roots are in the legs, expressed through the thighs, controlled by the waist and is sent out through the fingers”

The general interpretation by Taijiquan practitioners seems to be this: Internal force from the dantian goes to the soles to connect to the yongquan, up through the legs to the waist and the spine, and finally through the limbs (need not be fingers since the strike can be a palm, punch, elbow, shoulder, knee or heel etc).

According to some sources, when the internal force passes through the spine, the energy is compressed and intensified there before it is shot out of the body. This is why the back must always be kept straight. If it is crooked, the energy cannot flow through.

My interpretation, confirmed by direct experience, is different. The tenet means that one must be rooted to the ground with a solid stance, with a slight twist or sinking of the abdomen, internal force from the dan tian is channeled out through the body and through the arms to strike an opponent with the hand.

One must pay attention to two important points in fajing. The sinking of energy at his dan tian must be gentle. Forced sinking may cause hernia or other problems of the lower body. He must open his mouth, often with an explosive shout. Shutting his mouth may cause some internal force to bounce back hurting his internal organs.

When I explode force in this way, I do not feel any energy compressed or intensified at the spin. The spin is kept straight so that the internal force can flow through smoothly and quickly. Bending the spin while the internal force is flowing through may injure the spin or the central nervous system. 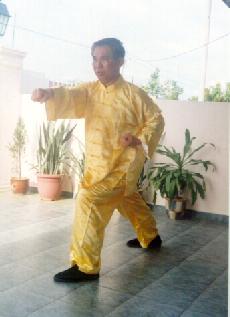 In our school beginning students in Shaolinquan learn to ”fa-jing” or explode force when they perform “Black Tiger Steals Heart”. Interestingly, they may not realize this is “fa-jing”, as it is quite common in our methodology to let students experience the skills first, then talk about the terms later.

Another aspect is that the qi from the legs is joined by ground energy flowing up through the yongquan and then sent up to the waist/spine. The idea is that one's own vital energy combined with an external source adds greater striking power. This feature seems unique to Taijiquan, although Baguazhang and Xingyi books make reference to this ground energy as well.

This concept of taking ground energy to add extra force to your own internal force is new to me. Personally I would discourage it.

Before one explodes force, he must be sure that he has enough of it at his dan tian for use. Not only is ground energy harmful to human, its up-flowing during fajing contradicts the basic requirements of sinking the dan tian and rooting the feet. This “collision” of ground energy and his own intrinsic energy can be very harmful.

I would like to quote Sifu Stier on this matter.

"When properly rooted, the chi of fa-jing does not rebound back to you. It moves downward with the sinking or lowering of the body during the counterstrike to 'bounce' off the floor or ground, then moves upward in a truly relaxed body to the last point of surface tension, which should be either the stretched palm of the hand or the closed fist where it is released into the opponent's body with a 'snap of the whip' electrical discharge.

When your body remains relaxed and flexible during this entire process, any chi that rebounds off any solid resistance in the enemy's body will passively transit downward through your body to your root at the floor or ground to complete the upward to downward cycle. The bending of the knees and lowering of the body on the counterstrike insures the maintenance of your root and allows the legs and relaxed arms to act as 'shock absorbers' during the rebound of chi following fa-jing, leaving you heavy and stabile in your stance." - Sifu Stier

I feel the process of fajing in Taijiquan is very complex. Would it not be much simpler to send the qi directly from the dantian to the striking hand or leg? I have also read some accounts of how too much fajing damages the internal organs as the force shakes them on the way out. This is despite the fact that during fajing, the body is supposed to be completely relaxed.

That fajing can harm the body even when the body is not tensed led me to wonder if there is something inherently wrong with the Taijiquan fajing method. My instructor told me that Yang Banhou lived a short life because he had to use fajing daily when accepting challenges from rivals in the capital. I also wondered if the skill in Cosmos Palm would be useful here, as the force from Cosmos Palm is so powerful but can causes no harm to something in between the striker and the target. 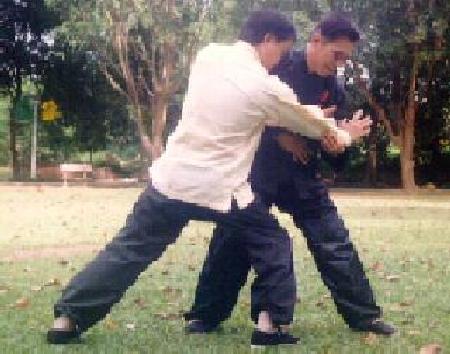 Sifu Wong applies a qin-na technique in Taijiquan on Goh Kok Hin before throwing him over with a shoulder throw. This qin-na pattern is called “Two Dragons Carry Pearl” in Wahnam Taijiquan

Yes, the fajing method described by Sifu Stier above is complex. Ours is simple, but not necessarily easy. Basically, as you have suggested, it is rooting yourself and shooting internal force from your dan tian (or sometimes elsewhere) into your opponent.

It is not harmful. But it can be harmful if you tense yourself in the process, or even if you are relaxed you allow your internal force to bound back to shoot yourself instead. Hence, in my opinion, the method described by Sifu Stier can be potentially harmful.

When you fajing or explode force on an opponent, your internal force penetrates into your opponent to hurt him. This explains why even when he wears protective gear, he still can be hurt.

But if the opponent has a powerful protection of chi, like an advanced Golden Bell exponent, his flowing chi may bounce off your internal force back into your body to hurt you instead.

One of our Shaolin Wahnam instructors had this experience. (I would not name him unless he wishes to identify himself and elaborate.) I was explaining to Darryl the use of the Monkey Paw when this instructor struck me hard with a Black Tiger. I had forgotten about this incident until a few years later the instructor recalled the incident and told me that as he struck me, he felt an excruciating pain shoot back into his body.

But I am unsure about internal force bouncing back from the ground. My guess is that the rebound energy from your opponent having traveled the length of your body to the ground, hopefully not having hurt you, would be absolved by the ground.

It was a pity that Yan Banhou, despite being a great Taijiquan master, died relatively young. I suspect he closed his mouth when exploding force, resulting in the internal force hurting his own internal organs. As he applied fajing frequently the amount of internal injuries caused would be substantial.

I came across some articles and books describing qinna in Taijiquan. Taiji qinna is not dependent on strong fingers and forearms. Rather, it uses the opponent's own body motion against him, as well as one's own internal force to maneuver the opponent to the desired position. For example, the Taijiquan expert uses dong jing and ting jing to follow the opponent and then uses one of the Taiji jing4 to uproot him or direct him to one side for a lock or an acupoint strike.

Qin-na is one aspect of Taijiquan that many practitioners today are unaware of.

Borrowing from Other Arts

Force training in Yang style Taijiquan may have been influenced much by other internal arts. I strongly suspect that the practice of pausing in each posture before moving on the next was something Yang Luchan picked up from Dong Haichuan (Baguazhang) and Guo Yunshen (Xingyiquan).

All my Chen Taijiquan books say that the way the Chen family did it was to learn the whole form while neigong was built through standing postures. Yang Luchan therefore modified the training regime which is why traditional Yang and Wu styles incorporate zhan zhuang during the form itself. Modern teachers however go straight into the form, as is the case with Shaolinquan today.

Practitioner of all styles of kungfu in the past spent some time in zhan zhuang before starting to learn any kungfu forms. This is expressed as “lian quan xian lian gong” — “Before practicing kungfu techniques, you must first develop force”. 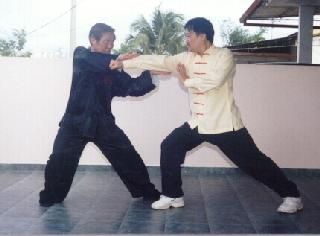