THE USE OF INTERNAL FORCE 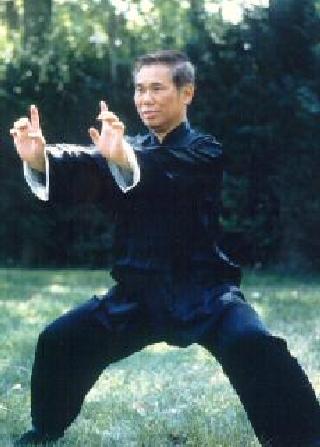 Sifu Wong performing the Golden Bridge, one of the chief ways to develop internal force in Shaolinquan

Sifu, in your book “The Art of Chi Kung”, you mentioned that the Shaolin Golden Bridge Stance is for training essence (jing1) while softer Taijiquan Three-Circle Stance is more for qi flow. Would I be correct to say these statements are relative? Both stances can train both aspects but all things being equal, certain stances are more effective for certain purposes than others?

Yes, you are correct.

When practicing my Taijiquan, my instructor continually reminds me to be mindful of the turning, twisting, folding and spiraling movements (luoxuan, tiaosong, zhedie). The Chen style calls this the practice of "chansi jing" (cocoon force). I think this area is emphasized because the Taijiquan form emulates the movement of qi in the body.

I only just read a very authoritative article about Taijiquan that had an interesting comparison made between Shaolinquan and Taijiquan when intercepting the same attack. Shaolinquan will use a short, intercepting force to stop the attack, thereby uprooting the attacker, whereas Taijiquan could use a movement that spirals and coils around the arm and into the attacker's body, also uprooting (the movement need not be a physical coiling, but an internal jing4 [more on jing4 below].

Physically twirling around the attacker's arm requires a lot of wasted movement and can give the attacker much more reaction time. Alternatively, Taijiquan could also use a short, “cold” force, like the Shaolinquan technique. Actually, from what I saw in the private videos, I believe Shaolinquan can also achieve the same Taijiquan spiraling effect, using a Dragon pattern, and also through internal force rather than external techniques.

Yes, you are right. I have often mentioned that all that is found in Taijiquan can be found in Shaolinquan. However, not many Shaolinquan practitioners may have the opportunity to reach these inner and higher aspects of Shaolinquan.

The aspects of Shaolinquan where most of Taijiquan is found are in the Snake and Crane styles, and some in the Dragon style. I think it was the Dragon pattern you mentioned that affect Taijiquan, and not vice versa. This Dragon pattern, called “Spiritual Dragon Demonstrates Majesty”, has a greater variety of force manifestation than what Taijiquan is generally possible. For example, a master with this type of Dragon force can injure an opponent with almost any part of his body. A corresponding pattern in Wahnam Taijiquan is “Blue Dragon Emerges from Water”. 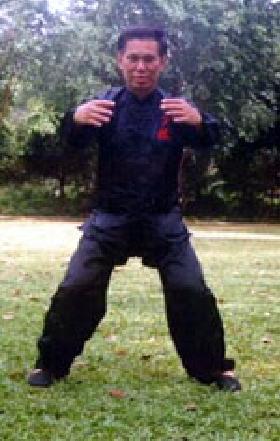 The Three-Circle Stance, demonstrated by Sifu Wong here, is a chief method to develop internal force in Taijiquan

One characteristic feature of Taijiquan is the many types of jing4. I have always been bewildered by the sheer number of jing4 that Taijiquan has. To my mind, internal force is internal force. Then I realized that possibly, the various jing4 refer to the different ways internal force can be expressed.

In Shaolinquan, there is a technique for all situations, such as making a circular movement to release a grip. In Taijiquan, the same effect is achieved using internal force manifested as “shaking jing4” (tandou jing) or “plucking jing4” (cai jing) rather than as a physical pattern, or as demonstrated by Sifu in a video clip, cold jing4..

Many of the jing3 are in turn expressed through representative techniques/pattern, such as “Grasping Sparrow's Tail” for peng, lu ji, an. But I think one mistake of many Taiji players today is to equate the posture with the jing4. For example, that the peng posture is the only way to execute the peng jing4.

Actually, in the course of my practice, I find that any one jing4 can be expressed through any technique. When I do the Kao (Bumping), I can feel a force radiating outwards which is more like Peng jing4.

I was thinking about the relationship between internal force, jing4 and techniques. Internal force is the most versatile since it can be expressed through different jing4 (like a spiral jing4 (luoxuan jing) or straight shooting jing4 (ji jing) or exploding jing4 (fajing) and these various jing4 are effected through specific patterns. A person who knows how to use his jing4 can use any patterns to express it, while those who only know the pattern but not the internal aspect may be able (but not always) to use the jing4 represented in that pattern but not any other type of jing4.

I am very glad of your insight shown in the above exposition. What you have said is right. It is the same jing but manifested in various ways. If practitioners understand this point, they would have saved much time and attained better result.

This principle of having the same internal force but manifesting it in different ways also applies to techniques. If you understand the principles behind the techniques and have the relevant skills, you can apply the same technique for different combat situations, or apply different techniques for the same situation, even though you may not have learnt the respective combat application beforehand.