STANCES IN TAIJIQUAN AND SHAOLINQUAN 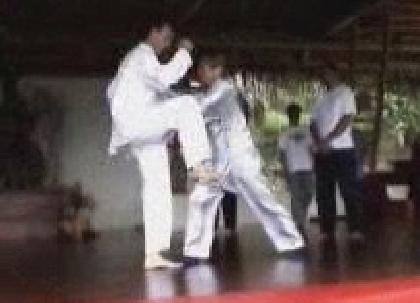 Stances are very important in both Taijiquan and Shaolinquan, and grounding in stances means qi sinks down from the body through the legs into the ground to make the stances solid. Here Sifu Wong grounds himself firmly to deflect a whirlwind kick from Sifu Rama.

One major feature of Taijiquan force training that keeps recurring and which I cannot reconcile with our Shaolin Wahnam qigong is the emphasis on “ground energy”. The Chief Instructor at my former Taijiquan school said that there is no need for a very large and deep stance when fighting because a Taijiquan expert maintains a connection with the ground energy and this keeps him rooted.

I am not sure if the above is true. I have observed Sifu and the senior disciples sparring in the video clips and the stances are the same as in normal practice. In other words, we in Shaolin Wahnam use in combat exactly what we practice.

I remember reading somewhere in our Discussion Forum that by “ground energy” you meant taking energy from the ground. This is not recommended in Shaolin Wahnam because this will make the exponent floating rather being rooted. When we say we ground ourselves, we mean our energy flows from us down to the ground, and not up from the ground into us. Moreover, while ground energy is beneficial to other beings like insects and plants, it is harmful to human.

Whether a large and deep stance or otherwise is used in fighting depends on various factors. When we wish to fell an opponent using “Black Bear Sinks Hips” (or the “sink” technique in “Grasping Sparrow's Tail”), for example, a large, deep stance is preferable. When we wish to kick an opponent using "Cross Hand Thrust Kick", the Single-Leg Stance we use is quite high.

A common mis-conception among many students, which I also made when I was young, is that the deeper the stance the better is the stability as well as the development of internal force. As I showed you this afternoon, if the stance is too deep when the knees protrude beyond the feet, it will block energy there causing knee injury.

On the other hand, if the stance is too high, it would be less effective for accumulating chi at the dan tian. Therefore we need to find a suitable and comfortable height. A crucial point is that your whole body should take the shape of a pyramid, even though this pyramid shape may not be symmetrical in some stances, so that your downward flow of chi will not be blocked by your knees, but through your legs into the ground acting like roots.

You are again right in your observation. We in Shaolin Wahnam use in combat as well as in our daily life what we practice. For example, we are both stable and agile, or both powerful and peaceful, not only in combat but more significantly in our daily life.

Another point which has perplexed me is the Bow Arrow stance. Sifu, you have explained to me at the Review course that the Bow Arrow stance in Wahnam Taijiquan is to protect the groin in combat. I am fully convinced of this. But I have seen photographs of Wu Jianquan and other masters with their legs shoulder-width apart in a Bow Arrow Stance. I wonder if the reason for that particular variation is to facilitate fajing, as expressed in the Classics' saying: “Body, Waist, Hand, Eye, all must face the correct direction in fajing”.

A signature feature of Shaolin Wahnam is direct experience. I am glad that this afternoon (10th June 2005) you yourself had direct and convincing experience why performing the Bow-Arrow Stance the way we do in Shaolin Wahnam was superior to performing the way you described in matters of stability, agility, force building, force explosion (fa-jing), ease of bodily movement, upper and lower body co-ordination as well as combat efficiency

Without personal experience and using intellectualization, it is difficult even strange to see how using a narrower base when the Bow-Arrow Stance is performed in a line is more stable than using a broader base when it is performed with legs shoulder-width apart. It is also strange how a more stable stance is also more agile. But the direct experience you had, where the difference was so obvious, that an intellectualized answer became irrelevant.

For those who may be interested in a philosophical explanation, the whole answer can be summed up in one word — chi. In a nutshell, if we consider the various questions at a physical level only, then a stance with a broader base would be more stable than one with a narrow base, and a more stable stance is less agile.

But when we consider at the level of chi and mind, the situations become different. The linear Bow-Arrow Stance allows chi to flow smoothly to the ground, rooting the exponent, whereas the shoulder-wide stance interrupts chi flow. Because the chi flow is smoother, a trained mind can more effectively direct it to flow down to be rooted or to flow up to be agile. A linear Bow-Arrow Stance where the chi flow is smoother, therefore can be both more stable and more agile depending on the instruction from the mind.

The same principle applies to the other situations. Because of better chi flow, building force, exploding force, moving the body by chi, coordinating the upper and lower body and combat efficiency will be more effective.

Regarding the saying in the classics concerning fajing, all the relevant bodily parts must face the correct directions, but not necessary the same one direction.

Another reason could be that the advanced Yang and Wu styles have very small stances, and the groin is inherently less vulnerable as compared to a wide stance. Therefore, the wide Bow Arrow stance in the Yang Chengfu form with the feet shoulder width apart could be a deviation. To protect the groin in combat, Masters Yang Junmin (Jwing Ming) and Liang Dongcai (T.T. Liang) have said that the front knee be turned in slightly. 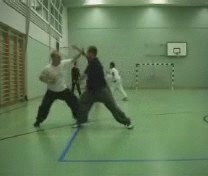 In Shaolin Wahnam the stances used in Taijiquan are the same as those in Shaolinquan, as shown here in a Shaolinqaun sparring practice by students of Shaolin Wahnam Switzerland. In the Bow-Arrow Stance, for example, both feet are in line with the toes hooked inward.

As can be seen in my comments above, protecting the groin is only one of many factors why we in Shaolin Wahnam perform the Bow-Arrow Stance in a linear manner.

While we respect Sifu Yang Jwing Ming's and Sifu T.T Liang's opinion, to us in Shaolin Wahnam turning in the front knee slightly to protect the groin is not a major factor. Generally we do not pay much attention to this factor because we have found that the way we perform the Bow-Arrow Stance already provides sufficient protection. The extra protection by turning in the knee is not much, and a skilful opponent can easily adjust his kick to by-pass it, or kick at the knee instead. More importantly, turning in the knee would negate other advantages we have.

But if the situation warrants it, we would turn in the knee as a temporary ad-hoc measure. Such a situation is unlikely to be for protecting the groin. To protect the groin, we find it more effective to sink back to a Eight-Tenth Horse Riding Stance, and strike the opponent's leg as he kicks.

A more likely situation is when we want to lock the opponent's front leg to hamper his moving away. Or to fell an opponent using our knee when he is in a shabby stance.

We also have a stance that looks like a Bow-Arrow Stance with the feet shoulder-width apart. It is called a Riding Dragon Stance. One such stance is found in our Shaolin Combat Sequence 15.