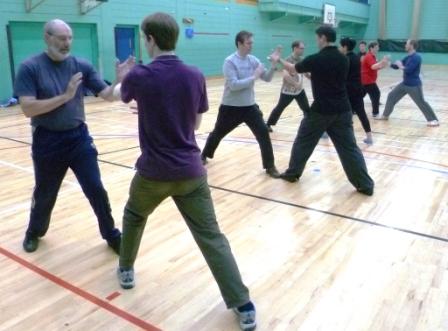 Participants at a Taijiquan course at a UK Summer were not tired nor panting for breath even after practicing Pushing Hands for an hour.

My Personal Thoughts, Feelings and Aspirations

I have been fascinated by both arts from a very young age, and I have always wanted to learn both. Having watched the Huang Feihong movies and numerous Zhang Sanfeng serials as a boy, I found both arts equally attractive. Even in my favourite novel, “Heaven Sword and Dragon Sabre”, my hero Zhang Wuji mastered a Shaolin neigong art and Taijiquan. From a very young age, I already knew that Taijiquan can be very fast and effective in combat and Shaolinquan has a very powerful internal core.

However, I had despaired of ever finding a true master of either of these two arts. Instead, I dabbled in Karate, Aikido and wushu in an attempt to find that missing element. It was with the greatest joy that I found out about you, Sifu. But even then, I still had this doubt in my mind (“Can this really be true? Can I really do all that Wong Sifu says?”). It was not until I went for my first intensive course that all the doubts vanished.

Your doubt was understandable and healthy. A basic teaching in Shaolin Wahnam, which is an echo of the Buddha's teaching, is not to accept any teaching on faith alone but access it to the best of our understanding and experience.

What we say in Shaolin Wahnam is actually incredible. Most people would count themselves very lucky if they can experience chi flow or internal force after training for one year, but our students, including those taught by our regional instructors experience them within a month. Most of those who attended my intensive courses experienced both chi flow and internal force on the first day of the course itself.

We do not blame anyone who does not believe us. Those who wish to find out whether what we say is true, are welcome to join our regional classes or my intensive courses, with our money-back satisfaction guarantee. Very few teachers can do more than this.

Anthony commented that if only 20% of what I had said was true, it would be worth the effort to learn from me. He kept an open mind and traveled half the globe to find out.

On the other hand, we do not want to waste time arguing with or proving to those who simply refuse to believe that chi flow and internal force are real, but are not ready to find out from personal experience. 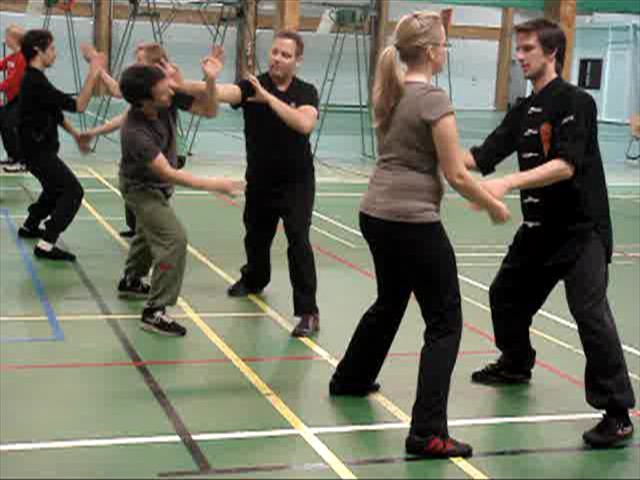 Participants at a Shaolinquan course practiced Connecting Bridge were not tired nor out of breath even after more than an hour. They could do so because they had been trained in breathing methods and control.

When I first read Sifu's website, I only read the Shaolin articles since Sifu is known to be a Shaolin grandmaster. For some reason, I did not read the Taijiquan section until some time later. At the same time, I found a good Taijiquan instructor of the Yang style (he refuses to be called a master) just before I went for the intensive course. So, Taijiquan became my first real martial art, and that leaves in me a strong impression.

As I progressed in Taijiquan, I loved it more and more. I found it most challenging to both my mind and my body, especially in the mind-body co-ordination. If I did not control myself, I could spend hours perfecting my co-ordination between the hands and legs, and how to relax in any posture. I enjoy mulling over and putting into practice the teaching of “co-ordinating the top and bottom and all the joints, even though I am far from achieving that. I think this is the same as the Six Harmonies mentioned by Antonius in his posts.

As may be obvious from my posts on the forum, I spend a fair amount of time on the theoretical aspect of Taijiquan and I love every minute of it. While I realize that theory is only a small part of the art, I have a great passion for researching Taijiquan and its history, because the topic is so profound and rich.

Congratulations for finding a good teacher. Good teachers in any art are rare today.

Taijiquan is a wonderful art. This is one main reason why although my training was mainly Shaolinquan and Shaolin Wahnam was originally founded to preserve and spread the Shaolin arts, we are sincere in wanting Taijiquan to prosper. An outcome is that now we also teach Taijiquan in Shaolin Wahnam.

Our forum has been much enriched by your contributions. The questions and points you raised in the forum were always very interesting, and their subsequent discussion has benefited many people.

It is also illuminating to mention that some of the points you raised were academic issues. In other words, once you have the relevant experience, those questions would have become irrelevant.

This does not mean that academic issues are not useful. They are. In fact your academic issues in the forum have helped many Shaolin Wahnam instructors to review what they have learnt from direct experience, and organize their thoughts in a systematic and coherent manner. Your academic issues also enable us to tell from their discussion, who are speaking from experience and who are not.

An example will make these interesting and educational points clearer. In the opening post on Breathing Methods and Control in Taijiquan, you mentioned:

"I am wondering about that, because in between each breath, there are striking movements (or in Taijiquan parlance, fajing movements) which should require an expulsion of breath. I would have thought each strike requires an outbreath to expel the qi (and waste). Maybe the Shaolinquan instructors could explain this to me, although it is probably all academic."

At that time (21st Dec 2004) you suspected it was academic. Now (15th June 2005) you know it is academic from personal experience. Talking on your own experience of fajing in the thread Old Yang demo on fajing you mention that

"the movements were very very fast, something like 3 punches in a second."

And you did not even need conscious breathing methods or control, your breathing was spontaneous. Yet, you were "totally relaxed" and "the surge of energy was exhilarating and converged on the point of striking."

Suppose someone argued that a particular breathing method was needed for fajing, without which fajing was impossible. You would know that he had little or no fajing experience. Or suppose he explained that one had to take in a deep breath, hold the breath at some point inside his body, then suddenly release the breath in fajing, you would know he based his answer on intellectualization and not on direct experience, because you would know that although what he had said was true in some cases, and it was also recorded in kungfu classics, once you have the skill of fajing you can do so in other manners.

Your academic questions made some instructors review what they had learnt from me to find material for your answers. As you would know very well by now, in our Shaolin Wahnam methodology we usually do not talk about the techniques, but perform the techniques, then if the situation warrants it, we may look back and describe the techniques used earlier.

This actually was the case with the breathing methods and control in not just Taijiquan but also Shaolinquan. Hence, some instructors reviewed what they had experienced, and Jeffrey presented a series of elegant answers. You may be pleased to know that the instructors benefited as much as you and other forum members did.

This was because although they had learnt breathing methods and control in Taijiquan as well as Shaolinquan, the methods and control were not explicitly numerated for them during their learning. Hubert described this situation when he realized on reading Anthony's explanation on Shaolin breathing methods that he actually had learnt them at the Intensive Course. Hence, in answering your questions, the instructors themselves benefited very much too. Your academic questions stimulated them to look insightfully into their arts.

This is an excellent example of a win-win situation, or in Buddhist term goodness begetting goodness. The instructors were sincere in wanting to help you, and in helping you they also gained much benefit for themselves.