MICHAEL BARELY MADE IT OUT OF THE HOUSE IN ONE PIECE

Just outside of Caernarfon I had to stop. Pinching the inside of my leg just wasn't working. We pulled up at a tea shop that also had a slate orientated craft centre attached to it. The staff of the tea shop didn't know what was about to hit them!

I decided it was time to show Sifu my new magic trick. One where I make a stack of silver coins appear, disappear (several times) and then transform them into a stack of copper coins. It's a great trick and Sifu loved it. Even attempting to perform it himself. I must say Sifu's art of distraction is something to behold.

Michael decided to share his 4-men-in-hats logic riddle with Sifu. I had first heard this riddle told by Michael in 2004. I was staying in a shared house with some of the other Wahnam instructors and Michael barely made it out of the house in one piece. You see nobody could get the answer and Michael wouldn't tell! Threats of violence and being sat on did nothing to extract the answer from him. Three years on and I still hadn't worked out the answer! As Michael finished the riddle the owner of the tea shop and her daughter had joined in the fun. They had enjoyed my magic trick and as business was quiet they were now enjoying Michael's logic puzzle. Michael took pity on us and shared an easier one about a man on a burning island. Sifu quickly worked this out. 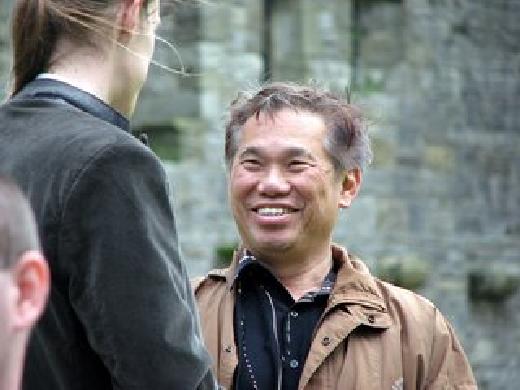 The Smile on Sifu's Face Said it All

As we said our goodbyes to the tea shop ladies, they were left with the unsolved riddle of the 4 men in hats. Driving off Michael confessed his compulsion to give them the answer so they could share it (along with the burning island puzzle) with their customers. But he decided against it. I wish I could play my cards as close to my chest as Michael does!

Sifu travelled in silence as we drove towards Caernarfon. Every now and then he would ask Michael a question relating to the 4 men in hats. As we arrived in Caernarfon Sifu announced he had worked the problem out, but our attention was drawn to the incredible castle on the hill. I managed to find a car park close by and we set off to explore Caernarfon castle.

Once we were inside the grounds Sifu took Michael to one side to confirm in private that he had indeed got the correct answer to the puzzle. The smile on Sifu's face said it all (see the incredible photo I managed to take). That was it, Sifu proceeded to give me a couple of clues and told me to relax and the answer would present itself. To my great amazement as I was climbing up one of the towers the solution did present itself, Sifu and Michael confirmed I was correct and we all had a good laugh. I was just relieved that I had managed to demonstrate that I do have some “Scholar” inside of me.