On our arrival at Dolgellau, I proposed a quick stop and walk about. I was starting to feel tired and needed some fresh air. The scene that unfolded was rather surreal. There were large groups of young people walking around. All were very jolly and replied heartily to Sifu's greetings (Sifu said hello to everyone!). 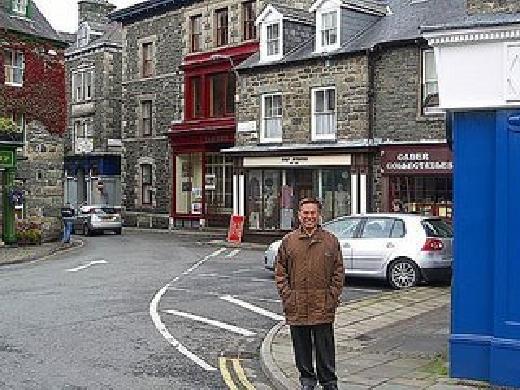 But I just couldn't work out why there were so many of them around. The answer presented itself after another brief stop for petrol and ice cream. As our navigator tried to plot a course out of Dolgellau and on to A470 that would take us to Porthmadog we had the opportunity to view Dolgellau from many different roads. One of the roads took us passed a large field that was full of tents. The riddle of the 100's of young people in the middle of nowhere, early on a Sunday morning was solved. We had stumbled across a music festival, if only we'd been there the night before we could have joined in!

Eventually we managed to get the car pointing in the right direction on the A470 and headed off for Porthmadog. Wales is a beautiful country and as I took in the scenery, Sifu and Michael took the opportunity to investigate the back of their eyelids! After a while my body wanted to join in. I realized that stopping every 45 minutes for me to walk around and wake up, wasn't going to win me any friends and I discovered that by pinching the skin hard on the inside of my leg, I could easily wake myself up again. Later, by necessity, I discovered an even better method. The Small Universe! A few circuits around the small universe soon raised my attention to a safe level.

The plan at Porthmadog was to head down to Pwllheli and beyond. Apparently Michael goes surfing down here and it is beautiful. Unfortunately it soon became apparent that we would be making alternative plans as the road was shut. This was rapidly becoming a familiar theme and we headed back to Porthmadog. Our navigator decided that Anglesey would be a fun place to visit and plotted a route.